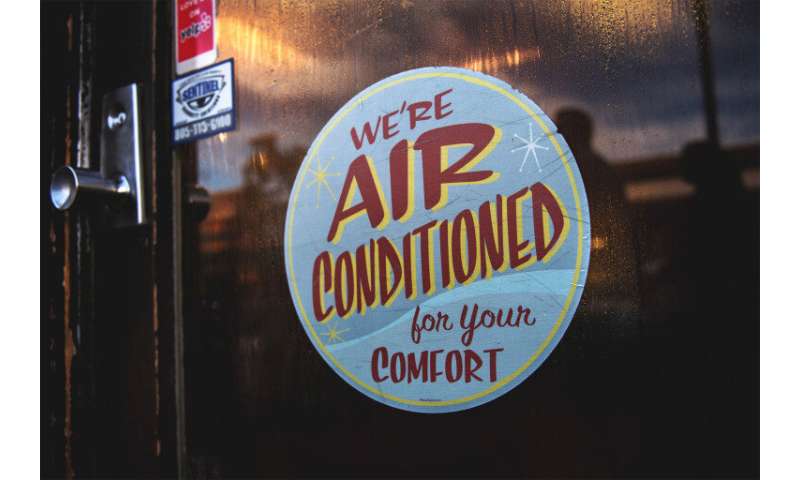 Drawing on insights from another deadly airborne disease, tuberculosis, a Harvard infectious disease expert suggested Friday that air conditioning use across the southern U.S. may be a factor in spiking COVID-19 cases and that ultraviolet lights long used to sterilize the air of TB bacteria could do the same for SARS-CoV-2.

Edward Nardell, professor of medicine and of global health and social medicine at Harvard Medical School (HMS) and professor of environmental health and of immunology and infectious diseases at the Harvard T.H. Chan School of Public Health, said that hot summer temperatures can create situations similar to those in winter, when respiratory ailments tend to surge, driving people indoors to breathe—and rebreathe —air that typically is little refreshed from outside.

“The states that, in June, are already using a lot of air conditioning because of high temperatures are also the places where there’s been greater increases in spread of COVID-19, suggesting more time indoors as temperatures rise,” Nardell said. “The same [thing] happens in wintertime, with more time indoors.”

Though transmission of the SARS-CoV-2 virus has been understood to transmit mainly through large droplets expelled during coughing, sneezing, or talking, Nardell said that evidence has risen that at least some cases of COVID-19 occur via airborne transmission. That happens when virus particles contained in smaller droplets don’t settle out within six feet and instead hang in the air and drift on currents. Airborne transmission is thought to have been a factor in the coronavirus’ spread among members of a Washington choir, through an apartment building in Hong Kong, and in a restaurant in Wuhan, China, Nardell said.

Airborne transmission would make people even more vulnerable to the virus in a closed room. Nardell said that in an office occupied by five people, as windows are closed and air conditioners turned on, CO2 levels rise steeply, a sign that occupants are rebreathing air in the room and from each other.

“As people go indoors in hot weather and the rebreathed air fraction goes up, the risk of infection is quite dramatic,” Nardell said, adding that the data, while gathered related to tuberculosis, would apply to any infection with airborne potential.

Nardell outlined the work Friday morning during an online presentation sponsored by the Massachusetts Consortium on Pathogen Readiness (MassCPR), an HMS-led collaboration of researchers from 15 Massachusetts institutions and the Guangzhou Institute for Respiratory Health in China. MassCPR’s aim is to foster research that will rapidly translate to the front lines of the COVID-19 pandemic.

The 90-minute public briefing, focused on issues raised by reopening efforts, was hosted by HMS Dean George Daley and included presentations on Americans’ mobility during the pandemic, contact-tracing efforts, development of personal protective equipment, and of viral and antibody testing as ways to detect new cases and better understand the pandemic’s course through society.

“We are united in our common goal to leverage our collective biomedical expertise to confront the immediate challenges of the COVID-19 pandemic,” said Daley, who serves on MassCPR’s steering committee. “But we are also committed to building a scientific community that is better-prepared for the next emerging pathogen.”

In his presentation, Nardell, whose past work has focused on ways to combat drug-resistant tuberculosis, said a dynamic similar to that in the U.S. South is being replayed elsewhere in the world. He cited a rise in air conditioner sales in India, where the systems are designed to bring in little outside air, again increasing chances of transmission. India, with nearly 500,000 COVID-19 cases, reported 17,296 new cases and 407 deaths on Friday, according to the World Health Organization.

Nardell said that being outside or increasing ventilation inside can be effective in slowing transmission, though the ventilation systems in many corporate settings limit how much fresh air can be brought in. Portable room air cleaners also can be used, though they can have limited air flow, he said. Germicidal lamps, a technology that Nardell said is almost 100 years old, have been proven effective in protecting against tuberculosis infection and are already in use in some settings to fight SARS-CoV-2. Compared with mechanical ventilation and portable room air cleaners, the lights, according to one study, have been shown to be up to 10 times more effective, Nardell said.

The lamps are set up to shine horizontally, high in the room where sterilization is needed. Air currents, stirred in part by warmth from human bodies, circulate up to the ceiling, where the ultraviolet light kills floating pathogens, and then back down again. This technology, Nardell said, is not only proven, it can be deployed cheaply and easily in a number of settings as society reopens.

The lights are not a panacea, however, and the predominant route of transmission needs to be considered in determining whether they are appropriate. Despite the need for disinfection in nursing homes, for example, transmission there may be mainly through close contact between staff and patients, making them less-than-ideal sites for the germicidal lights, Nardell said.