In the name of B.O., I've sprayed my underarms with ice-cold aerosol deodorants, smushed on jarred natural deodorant, and introduced Justin Bieber's deodorant collab to my pits. After all that testing, I can safely say finding your deodorant soulmate isn't much easier than finding your life soulmate, especially if you choose to forego antiperspirant and stick to an aluminum-free formula. Beautycounter, a brand with a longtime commitment to natural ingredients and sustainable packaging, has just made the hunt a little easier with The Clean Deo, which launches on January 12 in three scents: coconut, lavender, and rose.

If you're a Beautycounter fan, it may seem surprising the clean beauty brand, which formulates makeup, hair, and baby-safe skin care products, is just now launching its own deodorant. But Beautycounter began testing deodorant formulas all the way back in 2015, says Blair Lawson, the brand's chief merchandising and marketing officer. "Deodorant is probably the biggest product request that we've had from consumers since we launched Beautycounter," she admits to Allure. “There are other clean, sustainable, and refillable deodorants out there, but we wanted to create one that does it all."

The five-year holdup was due in part to Beautycounter's insistence on housing the new deodorant in recyclable, refillable packaging (a first for the brand). Like many other beauty products, deodorant is often made with mixed materials, which makes packaging impossible to recycle. With The New Deo, all you have to do is pop the stick out of its packaging and toss it straight in the recycling bin. After, you can easily snap a refill into the same chic outer packaging.

According to Beautycounter, opting for a refill, instead of a whole new deodorant, will reduce greenhouse gas emissions by an estimated 47 percent and the amount of waste in landfills — as well as the amount of money coming out of your bank account. Refills are $18, while a whole new package is $28. 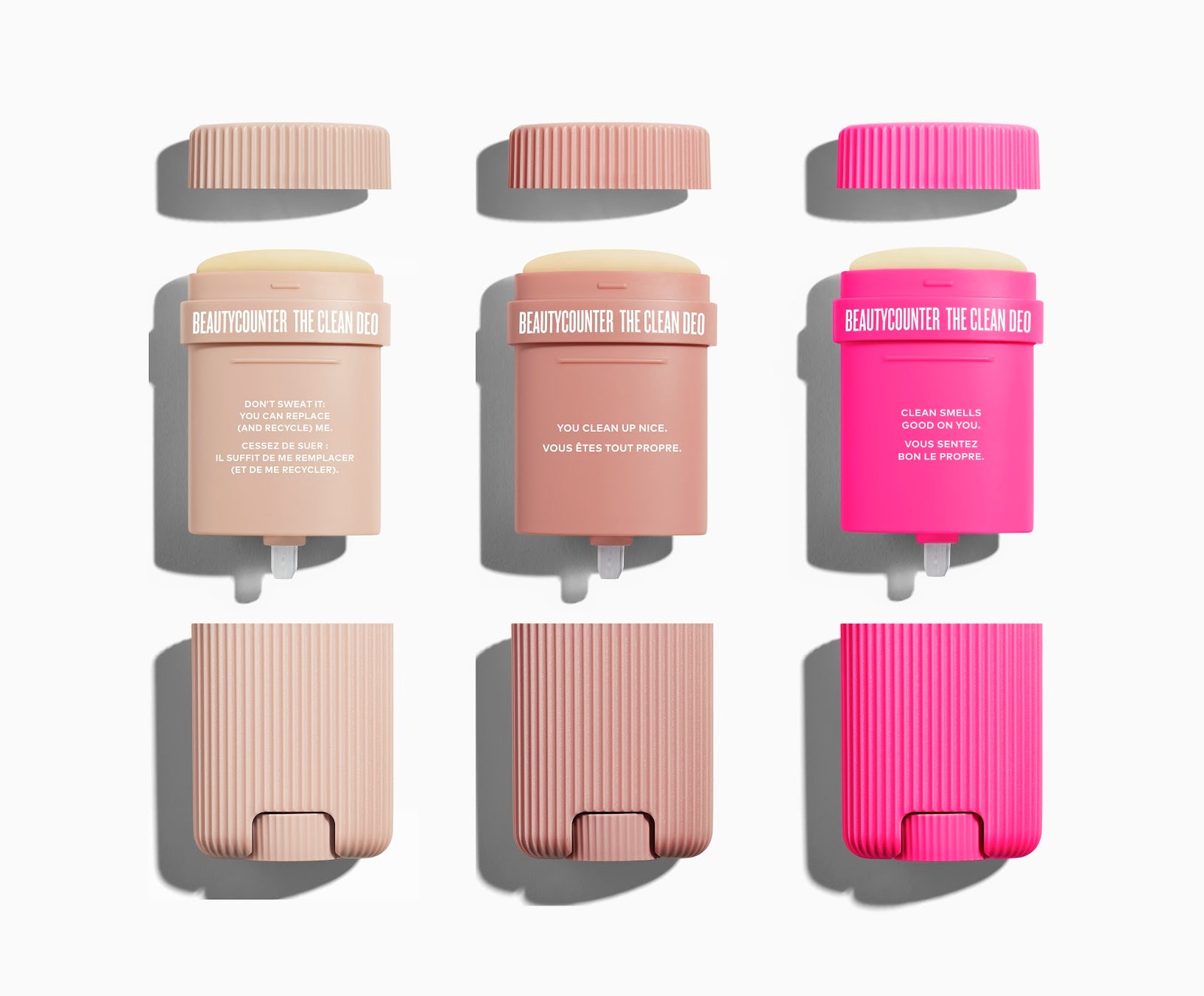 The Clean Deo's key ingredients include cornstarch and baking soda — both inclusions we can all both pronounce and picture soaking up sweat and stinkiness. But minimizing sweat is only half the battle. The deodorant also helps hydrate underarms with nourishing coconut oil and shea butter.

The new launch was also formulated without any ingredients from Beautycounter's 1,800-entry long "never list," which includes synthetic fragrance. Instead, the deo relies on essential oils, such as geranium and pink peppercorn, as well as aromatic natural materials, like raspberry ketone and vanillin, to give underarms a pleasant scent.

Instead of hiding fragrance under a "natural fragrance" catchall, though, the brand fully discloses every ingredient that goes into scent creation down to the components of the essential oils, including citral, citronellol, limonene, geraniol, and linalool — which is what made it possible for Ginger King, a cosmetic chemist unaffiliated with the brand, to review all three scents' ingredient lists for Allure.

One major note she had: "In fragrance, it's very hard to eliminate linalool, a common allergen [that occurs naturally in many flowers]," King explains. If you happen to be allergic to linalool, the coconut scent is your best bet, and avoid rose and lavender. Still, she confirms the ingredient lists are, in fact, clean as Beautycounter says they are.

I tested Clean Deo for two weeks, which just so happened to coincide with my 14-day free trial of an online workout platform — and as a result, my two sweatiest weeks of the year. It was my first time doing cardio, like jumping jacks and mountain climbers, and lifting anything heavier than a hardcover novel after a long break. Clean Deo kept my newfound dripping sweat in check — even my right armpit, which, for whatever reason, is way sweatier than my left (anyone else?).

I tested the rose and coconut editions. Both are uncomplicated scents that live up to their names. The rose scent had a stronger smell that lasted throughout the day, while the coconut scent seemed to disappear more quickly. Both neutralized body odor, according to me… and the partner I made smell me.

When swapping antiperspirant for natural deodorant once and for all, you may notice you're sweating more than usual. However, as board-certified dermatologist Alyx Cali Rosen previously told Allure, "switching to a natural deodorant doesn't cause excess sweat." Perhaps for the first time in a while, your body is going back to producing its normal amount of sweat. This period won't last forever — just until your body gets used to the natural formulas. (It took my body about a week to readjust when I first switched over to natural deodorant.)

The Clean Deo, in summation, is sustainable, recyclable, and leaves you smelling like roses (or lavender, or coconut). Check, check, and check. You can shop it for $18 to $28 on beautycounter.com now.