SAN FRANCISCO (AP) — California Gov. Gavin Newsom has led the nation’s most populous state through the pandemic using complicated metrics, county-by-county rules and a color-coded tier system dictating what people and businesses can do.

But with summer approaching, more Californians getting vaccinated, and a recall threat looming, he’s now taking a simpler approach: Come June 15, almost all restrictions will be lifted.

“This is a big day,” Newsom said Tuesday as he delivered the news that life could return to some semblance of normal by summer.

A statewide mask mandate will stay in effect, Newsom said, and he cautioned that California will reopen more widely in mid-June only if vaccine supply is sufficient and hospitalization rates stay stable and low. But he set no specific metrics to measure the state’s progress on either front.

It’s a marked difference from the state’s current approach to reopening. The color-coded system that California uses to dictate business operations assesses a detailed set of metrics including infection rates and prescribes specific limits for how many patrons a business can serve at a time. There are differing rules depending on the county.

Now, rather than watching for certain hospitalization numbers, the state will look at who is being hospitalized, keeping an eye on whether that includes people who are vaccinated, said Dr. Mark Ghaly, the state health secretary. The state will also continue to monitor where vaccinations are going, with an eye on making sure vulnerable Californians have access to shots, Newsom said.

“We have not put precise numerics to that,” he said when asked what the state will monitor as June 15 approaches.

Broadly, Newsom said it was time to forge ahead because the state’s infection rate is among the lowest in the U.S. and 20 million vaccinations have been administered so far. He expects to give out 30 million by the end of April, putting the state well on the path to partially inoculating the 32 million people16 and over who will be eligible. The state will consider supply sufficient if people seeking appointments can get one within two weeks. 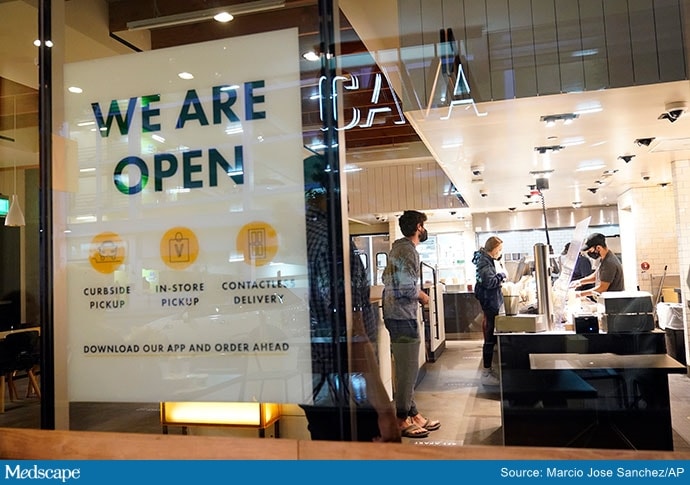 A sign advertises a restaurant opening in Santa Monica, California. The state will allow indoor concerts, theater performances and other private gatherings.

The announcement comes as states nationwide have lifted health restrictions and mask mandates as more people get vaccinated, despite rising infection rates in some places and concerns of another surge. California has had some of the nation’s strictest pandemic rules in the nation, becoming the first to institute a statewide stay-at-home order last spring.

Andrew Noymer, a public health professor at the University of California, Irvine, said California has reasons to be optimistic, but he questioned the decision to scrap the old system and set the June 15 goal so far in advance. It’s likely by summer all 58 counties could be in the lowest yellow tier anyway, but the new rules give little room to adjust if one county sees a new outbreak.

“I’m not sure I see the logic of all (of a) sudden going statewide when it was county by county, but I guess that’s what a recall will do for you,” he said.

By June, most capacity limits for businesses and recreational activities will be lifted, although larger indoor events, such as conventions, will be allowed only with testing or vaccination verification requirements.

Dr. Monica Gandhi, infectious disease expert and professor of medicine at University of California, San Francisco, believes California can begin reopening because many residents were exposed to the virus during the winter surge and many others are getting vaccinated.

“He wouldn’t have been able to keep it closed past June 15 anyway, because the cases would have been so low,” she said.

The pandemic has taken its toll on California, leaving more than 58,000 people dead, businesses closed and students out of classrooms for much of the year.

Newsom, who has pushed for in-person instruction to resume for younger public school students, said he expects no barriers to getting kids back into classrooms safely by June 15. But the decision on how and when to reopen has been largely left to local school districts and teachers unions.

“Planning for the future based on current public health conditions is prudent and necessary even though we still don’t know what the community infection rate will look like,” said Claudia Briggs, a spokeswoman for the California Teachers Association, in an email.

The yearlong closure of most schools is likely to be a major issue in the likely recall Newsom faces later this year, alongside the rest of his pandemic-related actions.

Kevin Faulconer, a former San Diego mayor and Republican who is hoping to replace Newsom, said in a statement that “it took millions of Californians signing a recall petition for him to finally begin reopening our state.”