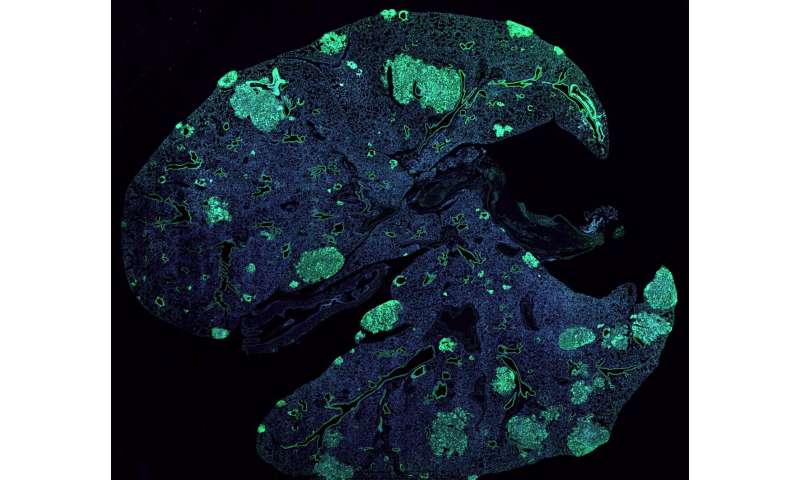 Tumors come in many shapes and forms—curable or deadly, solid or liquid, lodged inside the brain, bone, or other tissues. One thing they all have in common, however, is a knack for molecular deceit. It is often by posing as normal cells, or by hijacking them, that cancer cells advance their takeover of biological systems and learn to grow, survive, and spread to new organs.

Recently, Rockefeller scientists found that breast and lung tumors can appropriate a signaling pathway used by neurons to metastasize. In a report published in Nature, the researchers describe how these cancer cells enlist nearby blood vessels to gain access to this nerve signal, ultimately enabling their escape from the primary tumor and into the bloodstream.

In addition to illuminating previously unseen aspects of tumors’ relationship with their surroundings, the findings could lead to new strategies for diagnostics and treatment.

The classic example of a tumor’s pirate tactics is its ability to attract nearby blood vessels and hook itself up to the body’s central oxygen and nutrient supply. Years ago, scientists in Sohail Tavazoie’s lab observed that tumors that eventually metastasize tend to recruit more vessels than those that don’t, adding fuel to a long-held suspicion that infiltrating vasculature isn’t merely helping tumors survive and grow: It might also be participating in the lesser-understood process by which some cancer cells are capable of leaving their site of origin and seed new tumors elsewhere in the body.

“We hypothesized that cells in the inner lining of blood-vessels send a signal that instructs cancer cells within the primary tumor to metastasize,” Tavazoie says.

Bernardo Tavora, a research associate in the lab and first author of the recent paper, set out to look for that signal using a combination of sophisticated genetic, molecular, and biochemical approaches—including a modified form of TRAP, a technology developed in the lab of Nathaniel Heinz that makes it possible to pinpoint subtle differences between otherwise-similar cells and the proteins they produce. Ultimately, Tavora and his colleagues identified the signal as Slit2, a protein normally produced by neurons. In addition, they were able to explain how cancer cells get their hands on it.

When it first popped up in the search, Slit2 immediately rang a bell. In the nervous system, this signaling molecule is known to help guide nerve-cell extensions as they travel from one part of the brain to the other—for example, previous work in the lab of Rockefeller’s Cori Bargmann has revealed that it regulates connectivity among neurons in worms.

The researchers found that breast and lung cancer cells use what Tavazoie calls “an intricate and elegant mechanism” to coax blood-vessel cells into making and releasing Slit2—just enough of a dose to help the cancer cells start migrating. “The cells first activate normally silenced DNA to produce double-stranded RNA, which in turn acts as a signal to trigger their own movement out of the primary tumor and into the blood, from where they can spread to other organs,” he says.