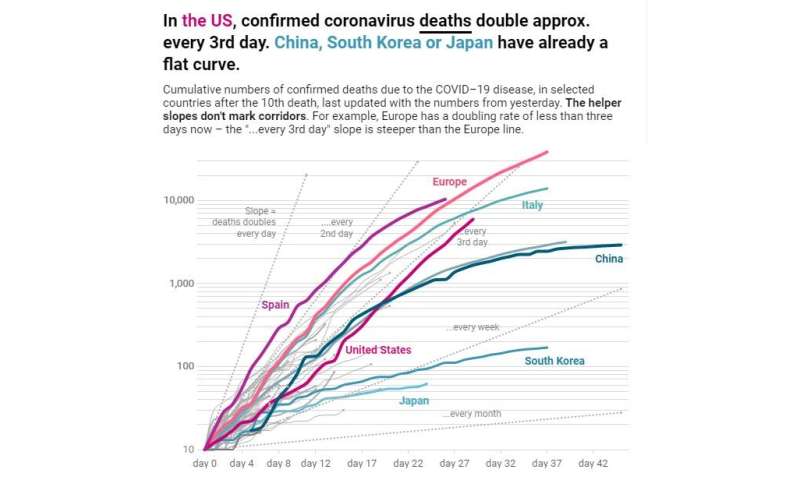 In the U.S., scientists stress that the number of coronavirus cases has been growing exponentially. In ordinary speech, the term “exponential” usually means “really fast.”

To mathematicians like myself, and to scientists and public health officials, the term has a precise and subtly different meaning: A quantity is “exponential” if its rate of change at each point is proportional to the current size.

Let’s explore why the difference matters, and how exponential processes can mislead our perception of risk.

This pattern presents a distinctive challenge. People intuitively underestimate exponential growth. By the time individuals sense their peril and act, the damage has been multiplied many-fold.

In an epidemic, numerical data and mathematical models are like night-vision goggles, illuminating what cannot be directly perceived.

To a good approximation, viruses spread exponentially in unexposed populations. Each infected individual meets others at random. At each meeting, there is some chance of the virus being transmitted.

The number of new cases in a one-day period—the rate of increase of infection, in individuals per day—is proportional to the number currently infected. 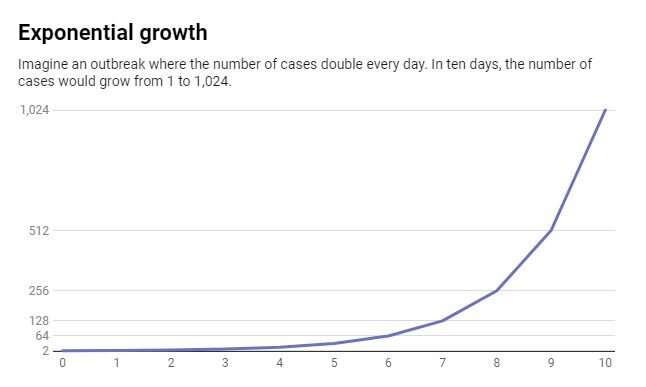 This percentage growth is constant, one doubling per day. In absolute numbers, however, an initial trickle grows rapidly into an uncontrollable flood.

The Centers for Disease Control and Prevention and World Health Organization had flagged the coronavirus as a U.S. public health concern by Jan. 21. At that time, there were only a few confirmed U.S. cases. Isolation of the infected and monitoring of their social contacts was technically feasible. Aggressive testing could have better revealed the true number and locations of cases.

Though testing in the first half of March was mostly confined to individuals needing hospitalization, even those numbers show the coronavirus doubling time in the U.S. was at most two and a half days.

Under these conditions, each eight-day delay in public health response translates into roughly 10 times as many cases and deaths as immediate action.

An exponential quantity is characterized by its starting value and its doubling time. By waiting until mid-March to act as a nation, the U.S. lost control over the starting value.

At any stage, however, people can collectively help lengthen the doubling time. Personal hygiene and social distancing effectively reduce viral transmission. Slowing the epidemic “flattens the curve.” The goal is to reduce the maximum number who are hospitalized at any given time and avoid overwhelming the medical system.

There are at least two civic lessons.

We citizens must recognize and respect the creeping-to-explosive nature of exponential growth. Epidemics start small and slowly. The CDC is equipped to detect potential outbreaks in early stages, but it needs the backing of government and the public to fulfill its mission.