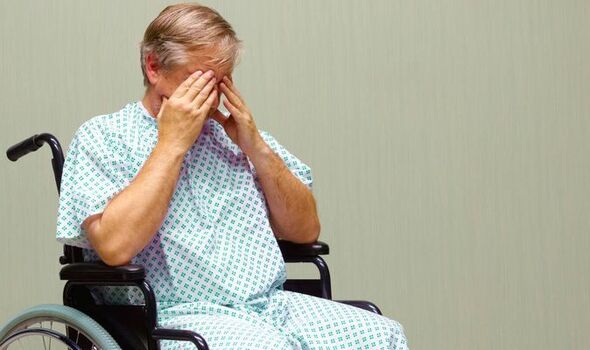 Prof Alistair Burns said it was a good opportunity to notice behavioural changes as people gather without restrictions for the first Bank Holiday in two years.

Early symptoms include difficulty concentrating, confusion, mood changes, struggling to follow a conversation and to carry out familiar daily tasks.

Prof Burns, the NHS’s national clinical director for dementia and older people’s mental health, said: “It is understandable that during the pandemic, some older people felt unable to seek help for symptoms, and it also reduced the chances of family members noticing changes.

Plunged “So this Easter, check in with older relatives or friends to see how they are doing.”

Around 900,000 people in Britain are thought to have dementia.

But referrals to memory clinics and dementia services plunged during the coronavirus crisis.

Analysis by the Alzheimer’s Society of NHS data for the 12 months to May 2021 found new GP assessments were down by 38 per cent compared with the previous year. But in February there were 2,362 new referrals to NHS memory clinics, up from 1,461 during the same month in 2021.

Prof Burns said that feeling “out of sorts” is not an inevitable part of ageing. He added: “If they or you are worried, please approach your GP for an assessment. The NHS is here to help.” Among people to be diagnosed after relatives noticed a change was Joan Andrews.

Her daughter Margaret Kiernan said: “There were some photos of our grandchildren but she thought it was her and her sister. She gave people presents when it wasn’t their birthday.

My son said she’d told him someone had been in her cellar and taken her Christmas cards.” Margaret. 70, took her mum to the GP in 2010. She was referred to a memory clinic and diagnosed with vascular dementia and Alzheimer’s. She died in 2017, aged 91.

Margaret said: “It was better to know and understand, so we had an idea of what the future would look like.

“We rang the Alzheimer’s Society’s support line for advice which was extremely helpful.”

The charity’s Dara de Burca, said: “Spotting symptoms is essential in getting a timely diagnosis and with diagnosis rates at a five-year low, tens of thousands of people are living with undiagnosed dementia.

“Receiving a diagnosis can be daunting but the Alzheimer’s Society is here to support people through the hardest and most frightening times.”

Meanwhile, hitting the bottle after the age of 40 could be an early sign of dementia.

Dr Georges Naasan, of the Icahn School of Medicine at the University of California, said: “We found up to seven per cent – nearly one in 15 – of patients with frontotemporal dementia started abusing alcohol later in life, and five per cent did so as the first symptom of the disease.”

Being apart from loved ones during Covid and not having the same social interactions has taken a toll on our mental health.

It has been particularly tough for older people.

While it was vital we kept families and friends safe from the virus, it reduced the chances of checking on parents and grandparents and spotting when things weren’t quite right.

So this weekend, check in with older family members.

Feeling down and “out of sorts” is not an inevitable part of growing old.

And if you think someone might have early signs of dementia, encourage them to see a GP. Early diagnosis is crucial – progression of dementia can be slowed down in some cases and our teams can put support in place that can really help.

The sooner you come forward, the sooner we can see and treat you or your loved ones.