Drug counterfeiters are using the corona pandemic to make profits in Africa selling completely ineffective or even harmful medicines. In Cameroon and Congo, five different types of falsified chloroquine tablets have appeared in recent weeks, containing far too little active ingredient, or even completely different ingredients. The falsified medicines were identified by Professor Lutz Heide’s research group at the Pharmaceutical Institute of the University of Tübingen in cooperation with African pharmacists and the German Institute for Medical Mission (Difäm). The results were published in the American Journal of Tropical Medicine & Hygiene.

A few weeks ago, it was reported worldwide that the drug chloroquine might potentially help in the cure of the disease COVID-19. Chloroquine has been used against malaria parasites for decades, but it has not been shown to help patients suffering from viral diseases. Experts therefore warn against its use in COVID-19 patients, also because of possible serious side effects. As a result of widespread reporting on the possible efficacy of chloroquine in corona infections, however, global demand for chloroquine has risen sharply. “As a result, prices also went up and called drug counterfeiters into action,” says Lutz Heide.

At the end of March, faith-based drug supply organizations in Cameroon and Congo, which work together with Difäm from Tübingen and the Ecumenical Pharmaceutical Network (EPN) from Kenya, reported on the emergence of falsified chloroquine tablets. These preparations had been purchased not only from illegal market vendors but also in licensed pharmacies. They turned out to be falsified when examined with a mobile laboratory by the African pharmacists. The African researchers were able to send samples to the University of Tübingen, where they were examined by Ph.D. students Gesa Gnegel and Cathrin Hauk in the Pharmaceutical Institute. The analyses showed that one of the preparations contained less than a quarter of the declared amount of active substance—too little to cure patients, but suitable for promoting the development of chloroquine-resistant malaria parasites. 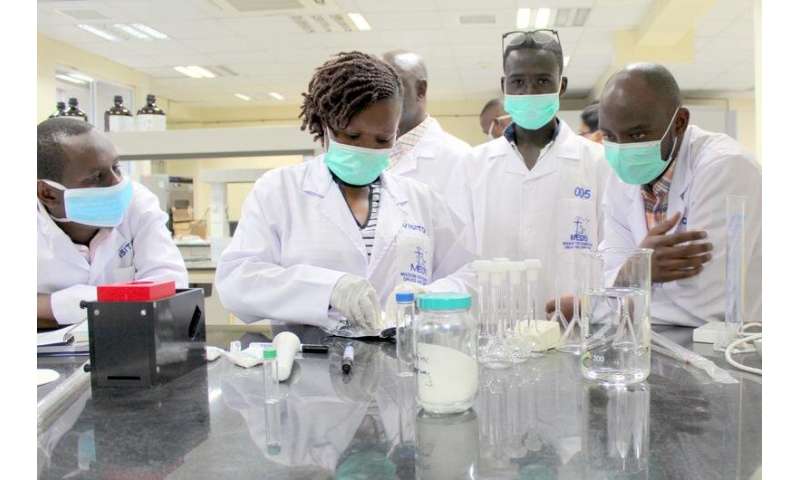 In a second falsified medicine, the Tübingen pharmacists found the painkiller paracetamol instead of chloroquine. In three other preparations, they discovered an unknown substance which was identified as the antibiotic metronidazole by the chemist Dr. Dorothee Wistuba using mass spectrometry. “This very bitter substance was probably used to imitate the bitter taste of chloroquine,” says Gesa Gnegel. However, in comparison to common metronidazole tablets, the falsified medicine contained far too small amounts of the antibiotic and therefore may promote the development of antibiotic-resistant bacteria. “The falsified tablets therefore contain little or no chloroquine, but do contain other active ingredients, each with its own risks and side effects, of which neither doctor nor patient is aware. This is one of the most dangerous forms of falsified medicines.”

The Tübingen research team and their African colleagues informed the World Health Organization, which published an international Medical Product Alert with photos of the falsified drugs. The researchers assume that these falsifications are only the beginning of much larger problems. “We recently warned of this danger in the British journal The Lancet together with a group of 55 scientists from 20 countries,” says Heide. “Any potential medicine or vaccine reported to be effective against COVID-19 can trigger a desperate demand worldwide.” In all countries, especially in the poorest, this will attract drug counterfeiters whose products may endanger the lives and health of millions of people.

Falsified medicines have been documented throughout history, especially in the times of epidemics. Quackery was rampant during the plague epidemics of the Middle Ages and modern times. When Cinchona bark was introduced in the 17th century to treat malaria, it was adulterated on a large scale. Even after the Second World War, the lack of penicillin led to widespread falsification of this medicine.