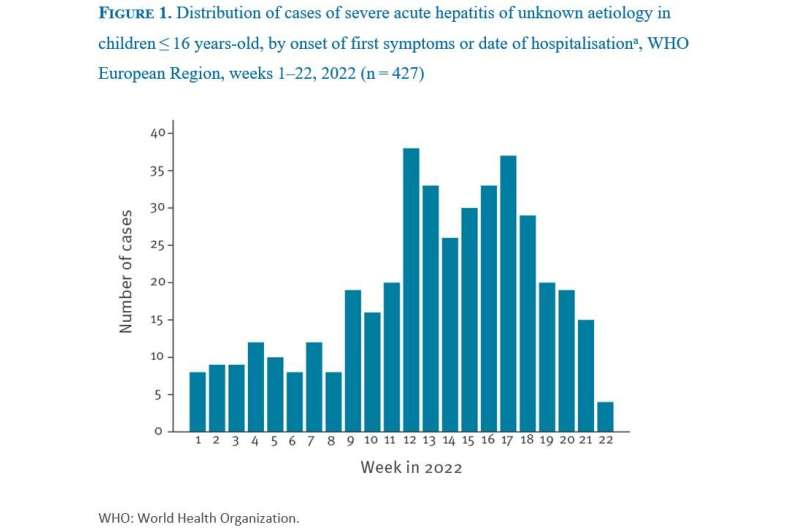 Scottish authorities were alerted about an observed unusual number of severe liver inflammation (hepatitis) cases in children in April 2022. The infection could not be linked to commonly known causes for hepatitis. Until mid-June 2022, 427 cases of pediatric hepatitis of unknown origin were notified from 20 countries across the World Health Organization’s European Region for the period 1 January to 16 June 2022.

In their outbreak report published in Eurosurveillance, Vidal et al. analyze demographic, epidemiological, clinical and microbiological data available from The European Surveillance System at the European Centre for Disease Prevention and Control.

Most affected: Children under five years

Most of the severe infections were diagnosed among very young children between zero and five years of age (77% or 330) and every second child (53%) tested positive for adenovirus. In the United Kingdom (UK), the majority (68%) of children with acute hepatitis of unknown origin were diagnosed with adenovirus at the same time.

A distinctly smaller fraction among the notified 427 children had SARS-CoV-2 (10%) and the same number of children was coinfected with both adenovirus and SARS-CoV-2.

The highest proportion (60%) of positive tests for adenovirus was found among the youngest group of children aged 0 to five years. At 36%, this group also accounted for the highest number of admissions to intensive care or high-dependency units (ICU/HDU) due to their acute liver inflammation compared with the age group of six- to 10-year-olds (22%) and adolescents between 11 and 16 years of age (10%).

In addition, 16 of the 18 children across the WHO European Region who needed a liver transplant were younger than five years old (but the authors did not find a significant difference by age group in the odds of transplantation).

Analyzing the data, Vidal et al. found that those children with adenovirus infections were significantly more likely to be admitted to ICU/HDU due to their severe hepatitis and “adenovirus infection is therefore one of the main etiological hypotheses under investigation, although a causal relationship has not been proven and additional cofactors are under investigation.”

More than half of the cases (59%) occurred between weeks 9 and 17 of 2022 with an observed decline from week 18 onwards. The authors however point out at a possible reporting delay caused by the fact that severe hepatitis might only develop weeks after the onset of the first symptoms and thorough investigations to exclude specific causes could take several days or even months which would make recent trends challenging to interpret.

Looking at data from reported cases with a result on testing for adenovirus across different European countries, prevalence of adenovirus infection was 64% among the children in the UK compared with 35% in other countries (p < 0.001). When adjusting by age, children with severe hepatitis in the UK were still significantly more likely to have an adenovirus infection than cases in other countries (odds ratio = 3.10; 95% confidence interval: 1.90–5.07).

More than half of the children (53%, 74/140) with severe hepatitis in the UK were admitted to ICU/HDU compared with other European countries where 8 of the 101 children were hospitalized (p < 0.001).

Vidal et al. summarize that their findings “may indicate a higher likelihood of severe disease in younger children, but what is not clear is whether reported cases across all ages share the same etiology. It may also prove difficult to identify a definite causative agent.”