Ex-England footballer Sue Lopez has blamed her dementia on heading the ball during her career.

She believes the memory-robbing disease was a result of her suffering concussion several times from heading the ball.

Research has linked moderate and severe traumatic brain injury to a greater risk of developing Alzheimer’s or dementia in the future.

Scientists suggest repeated small head impacts may be to blame for professional footballers being diagnosed with dementia more often.

Ms Lopez is one of many urging for a heading ban in youth football in response to concerning findings of major studies. 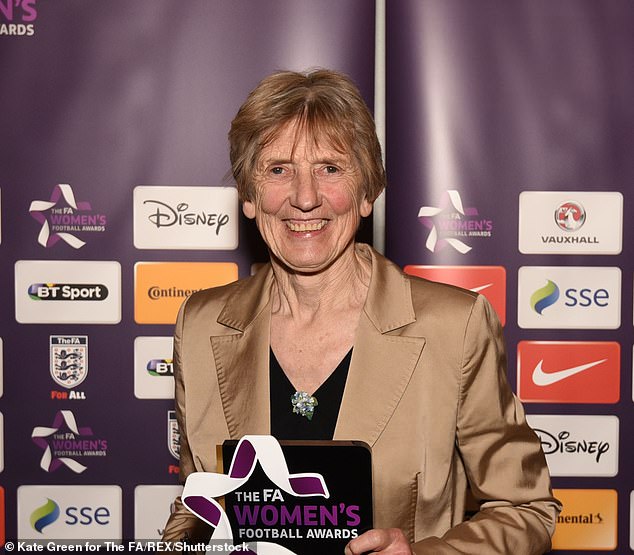 Ex-England footballer Sue Lopez has blamed her dementia on heading the ball during her career. She is pictured in 2018, the year she was diagnosed 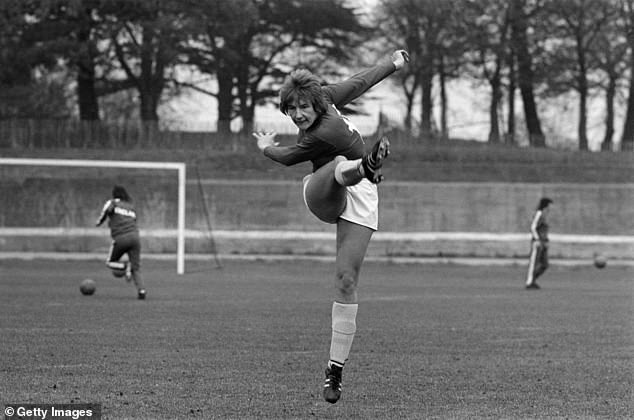 Ms Lopez, who helped Southampton win the FA Cup eight times, is one of many urging for a heading ban at least in youth football. She is pictured training for an England v France match 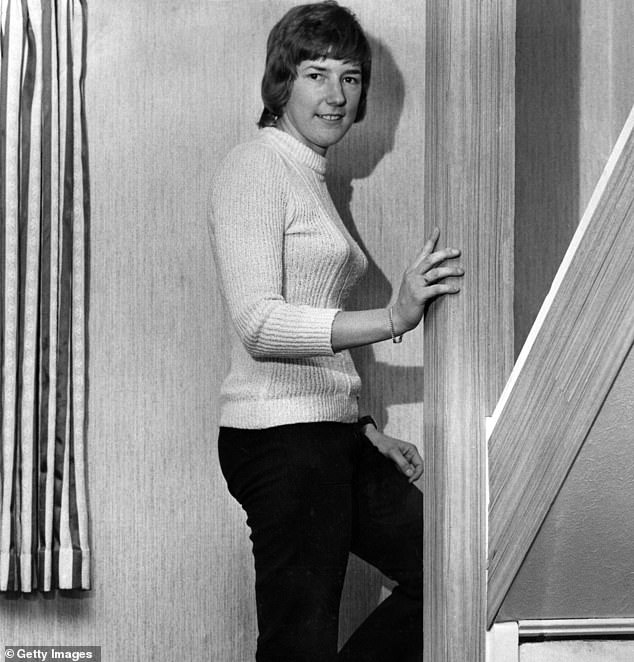 Speaking to the BBC, Ms Lopez, pictured in 1972, said: ‘I think my dementia has been caused by the heading of a football’

Speaking to the BBC, Ms Lopez said: ‘I think my dementia has been caused by the heading of a football.

Ms Lopez, who was made an MBE in 2000 for services to women’s football, is the latest sports player to urge a heading ban in under 12s.

AFC Bournemouth is the only Premier League club of 20 approached by the BBC to say they have a ban in place.

It follows reports this month that The Scottish Football Association will soon implement rules to stop primary school children in Scotland from heading the ball.

HOW CAN PLAYING FOOTBALL LEAD TO DEMENTIA?

Footballers suffer repeated blows to their head, mainly through heading leather footballs and colliding with other players.

Leading scientists have found such injuries can lead to chronic traumatic encephalopathy (CTE), a crippling condition which can cause dementia.

Former England and West Bromwich Albion striker Jeff Astle died in 2002, aged 59, from CTE. He was left unable to recognise his own children.

An inquest ruled that Astle’s CTE was caused by heading footballs – the first British professional footballer to be officially confirmed to have done so.

Stiles’ son two years ago criticised the FA for failing to properly investigate a link between the sport and degenerative brain disease.

A landmark study of 14 retired footballers by University College London experts in 2017 found four had a condition CTE.

The link between head trauma and CTE is widely established in boxing, rugby and American football, where such injuries are common.

Former New England Patriots star Aaron Hernandez had CTE when he killed himself in April at the age of 27 while serving a life sentence for murder.

Scotland will be the first European country to do so, following the US which has had a similar ban in place since 2015.

The English FA currently refuse to do the same, saying there is not enough evidence that heading the ball causes long-term damage.

It says: ‘As it stands there’s no evidence to suggest that heading should be banned in youth football.’

This is despite independent research by University of Glasgow in 2019, funded by the FA, which found professional footballers were 3.5 times more likely to die of dementia than other causes of death.

The major ‘FIELD study’ assessed the health of 7,676 professional footballers born between 1900 and 1976. It was published in the respected New England Journal of Medicine.

A total of 11 per cent of the former professional footballer’s health records declared that they had died from dementia, compared to around three per cent for the socio-demographically matched sample.

On the back of the findings, FA chairman Greg Clarke said ‘many questions still need to be answered’.

The study was campaigned for by the family of former West Bromwich Albion striker Jeff Astle who died aged 59 in 2002.

The inquest into his death found heading heavy leather footballs repeatedly had contributed to trauma to his brain.

Former England captain Alan Shearer once said he feared he would get dementia because he used to head footballs 100 times a day during his playing career.

Jeff Astle, a former West Brom player, developed dementia in middle age and died when he was just 59. His family has since run a high-profile campaign about the dangers of heading footballs after a coroner ruled that was what caused his illness

But campaign group Pink Concussions claim the link between concussion and neurological damage may be more significant for female players.

A spokesman for the FA said: ‘The [FIELD] study does not determine whether the cause is due to concussions suffered by the group of professional footballers, or concussion management, or heading of the football, or style of play, or the design and composition of footballs over the years, or personal lifestyle, or some other factor.’

The FA said it continually reviews its position based on evidence and expert advice.

It added: ‘More research was needed into why players had been affected, but that there is not enough evidence at this stage to make other changes to the way the modern-day game is played.’

Dr James Pickett, head of research at the Alzheimer’s Society, said the FIELD study does not say ‘anything about the risk of a Saturday kick about in the park’.

He was only 59 but doctors said he had the brain of a 90-year-old after suffering from chronic traumatic encephalopathy (CTE).

CTE is a progressive, degenerative brain disease found in individuals with a history of head injury, often as a result of multiple concussions.

An inquest ruled Astle died from dementia caused by heading footballs – the first British professional footballer to be officially confirmed to have done so.

Astle, who was left unable to recognise his own children, once commented that heading a football was like heading ‘a bag of bricks’.

His family set up the Jeff Astle Foundation in 2015 in order to raise awareness of brain injury in sport. His daughter Dawn said ‘the game that he lived for killed him’.

Danny Blanchflower, who captained Tottenham Hotspur during their double winning season of 1961, died after suffering from Alzheimer’s disease in 1993. He was 67.

His death has also been linked to heading the heavy, leather balls of the 1940s and 50s, along with fellow Tottenham players Dave Mackay, Peter Baker and Ron Henry.