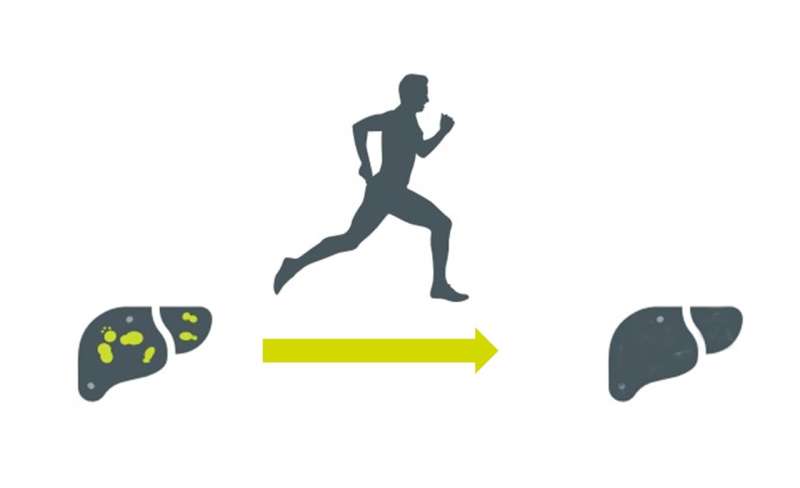 Exercise not only trains the muscles but can also prevent the development of fatty liver. A new study by the German Center for Diabetes Research (DZD), Helmholtz Munich and Tübingen University Hospital shows which molecular adaptations, in particular of the liver mitochondria, can be observed in this process. The study has now been published in Molecular Metabolism.

Worldwide one in four persons suffers from non-alcoholic liver disease (NAFLD, also called metabolic liver disease MAFLD). Those affected often have type 2 diabetes as well as an increased risk of liver cirrhosis and cardiovascular diseases. In addition, NAFLD is associated with increased mortality. An imbalance between energy intake and consumption is discussed as a cause for the disease. This leads to fat deposits in the liver and over time impairs the function of the mitochondria—both risk factors for the development of hepatic insulin resistance and liver inflammation.

To prevent and treat NAFLD, lifestyle modification with increased physical activity is recommended. To what extent regular exercise alters the adaptation of the liver to increased energy intake and what role skeletal muscle plays in this process was investigated by scientists at the Institute of Clinical Chemistry and Pathobiochemistry at Tübingen University Hospital and at the Institute of Diabetes Research and Metabolic Diseases (IDM) of Helmholtz Munich at the University of Tübingen. The researchers collaborated with the Institute of Experimental Genetics (IEG) at Helmholtz Munich, the Leibniz Institute for Analytical Sciences in Dortmund, and the Dalian Institute of Chemical Physics in China.

In the study conducted by Dr. Miriam Hoene and Dr. Lisa Kappler, mice were fed a high-energy diet. Some of the mice also received regular treadmill training. Following the six-week intervention, the researchers examined the animals’ livers and muscles for changes in the transcriptome, the mitochondrial proteome, lipid composition, and the mitochondrial function.

The results showed that training regulated important enzymes of glucose and fructose degradation in the liver as well as the mitochondrial pyruvate metabolism. In this way, the substrate burden for mitochondrial respiration and lipid synthesis can be reduced. As a consequence, less fat is stored in the liver—and specific lipids such as diacylglycerol species are lowered. Moreover, glucose control improves in the exercise trained mice. In addition, an increased respiratory capacity of the skeletal muscles relieves the metabolic stress in the liver.