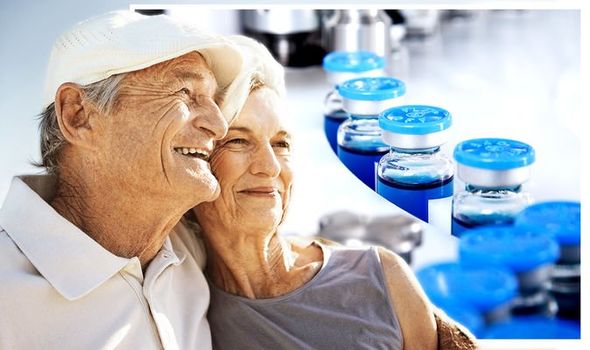 Previous research has focused on targeting clusters, or plaques, of amyloid beta protein that form in the brain and are thought to drive the disease.

But experts in the UK and Germany have developed a pioneering approach which targets the protein when in a different, soluble state.

They created an antibody treatment and vaccine which were able to halt the disease, reduce plaque formation and even restore memory and nerve cell function during trials in mice.

Professor Mark Carr, an expert in structural and chemical biology at the University of Leicester, said: “The results are truly spectacular.

“I accept that it’s in mice, it’s not in people. But the effects are not marginal.

“I think you couldn’t probably ask for more encouraging data.”

Amyloid beta naturally exists as flexible, string-like molecules in solution, which can join together to form fibres and plaques.

The protein is thought to play a role in the sleep cycle but its exact functions in the brain are not well understood.

In Alzheimer’s disease, a high proportion of these string-like molecules become shortened or ‘truncated’ and some scientists now think these forms are key to disease development.

In recent decades, most experimental treatments have focused on trying to clear plaques from the brain.

Professor Thomas Bayer, from the University Medical Center Göttingen, said none had much success in reducing symptoms so his team took a different approach.

He said: “We identified an antibody in mice that would neutralise the truncated forms of soluble amyloid beta, but would not bind either to normal forms of the protein or to the plaques.”

British medical research charity LifeArc adapted the mouse antibody so it would not be rejected by the human immune system.

Researchers at the University of Leicester then studied how the antibody was binding to the protein. They were surprised to find the protein had folded back on itself into a hairpin shape – never seen before in amyloid beta.

They hypothesised that this unusual shape may also occur when the protein is interacting in the body and driving the disease, although they did not know how.

The team engineered a stabilised form of the hairpin structure, which was used to create a vaccine that would induce the immune system to make antibodies to attack it.

When the treatments were tested in two groups of mice, with mild or aggressive forms of Alzheimer’s, researchers were astonished by the results.

Both the antibody and vaccine helped to restore memory and neuron function, increase glucose metabolism in the brain and reduce amyloid beta plaque formation, with no bad side effects.

Prof Carr said the methods used to assess the effects – including MRI and PET brain scans – were the same used to track the disease in humans.

He added: “We’re very confident that what we see in the mice is very likely to be replicated in humans.

“The effects that we’ve seen, nothing close to those effects has been seen with anything that people have tried in the last 20 years.

“It dramatically reduces the formation of these plaques, dramatically protects against the loss of nerve cells.

“I think it is genuinely exciting. Compared to anything that I’ve seen appear in the field, this looks like it will work.”

Researchers are now seeking a commercial partner to take the antibody and vaccine into human trials.

They said the vaccine would be relatively low cost at between £15-50 per dose, similar to the Covid jabs.

What is happening where you live? Find out by adding your postcode or visit InYourArea

The antibody treatment might cost £3,000 to £10,000 for a course of two to three infusions over a year, or less if used in large numbers of patients.

Dr Susan Kohlhaas, director of research at Alzheimer’s Research UK, said this could be “a promising new approach, and one that has so far not been tested in Alzheimer’s drugs in clinical trials”.

She added: “Currently there is no disease-modifying treatment available for people with Alzheimer’s in the UK, making drug development even more urgent.

“Like any new drug, this treatment will need to go through a series of clinical trials in people and while this discovery offers hope, this approach is a long way off being proved successful in humans.”

Professor Tara Spires-Jones, of the University of Edinburgh, said: “While this study is interesting for the research community, it is important to keep in mind that the findings are from relatively small numbers of mice and we have a long way to go to know whether this approach will be useful for people.”

The findings were published in the journal Molecular Psychiatry.