The worldwide increase in the circulation of the severe acute respiratory syndrome coronavirus 2 (SARS-CoV-2) has led to the crossing of the shocking milestone of 100 million reported cases.  Among the chief causes of growth in infection numbers have been the emergence of new variants, notably the UK variant, with increased infectivity relative to the ancestral strain. However, a new preprint research paper, posted to the preprint server bioRxiv*, presents data indicating that the Indian-made Covaxin vaccine candidate successfully neutralizes this variant, preventing infection when challenged by it.

The UK variant is also called the Variant of Concern (VOC) 202012/01, also known as lineage B.1.1.7 or 20B/501Y.V1. It has rapidly increased as a proportion of new cases of COVID-19 in the UK in the space of fewer than two months. B.1.1.7  has been sequenced from other countries as well, and since direct flights connected many such affected regions to and from the UK, the potential for a dramatic rise in cases worldwide is obvious.

Similar concerns have been expressed about the so-called South African variant, underlining the issues raised by these variants concerning the newly available COVID-19 vaccines' protection.

The UK variant has 17 mutations in its genome, with eight on the spike receptor-binding domain (RBD), which allows the virus to attach to the angiotensin-converting enzyme 2 (ACE2) receptor on the target host cell.

The UK has rolled out vaccination with the Pfizer-BioNTech vaccine, and the Oxford Astra-Zeneca vaccine. Both are mRNA vaccines, inducing spike antigen expression of earlier SARS-CoV-2 strains. The million-dollar question is whether the many spike mutations found in the later variants will affect the ability of vaccine-induced antibodies directed against the earlier D614G spike version to neutralize the virus.

Covaxin is an indigenous inactivated whole-virion SARS-CoV-2 vaccine BBV152. It has been reported to have high neutralization potency in a phase I clinical trial against the homologous hCoV-19/India/2020770 strain, as well as two other heterologous unclassified cluster strains, hCoV-19/India/2020Q111 and hCoV-19/India/2020Q100. Notably, all three strains possess the N501Y mutation characteristic of the UK strain spike RBD. 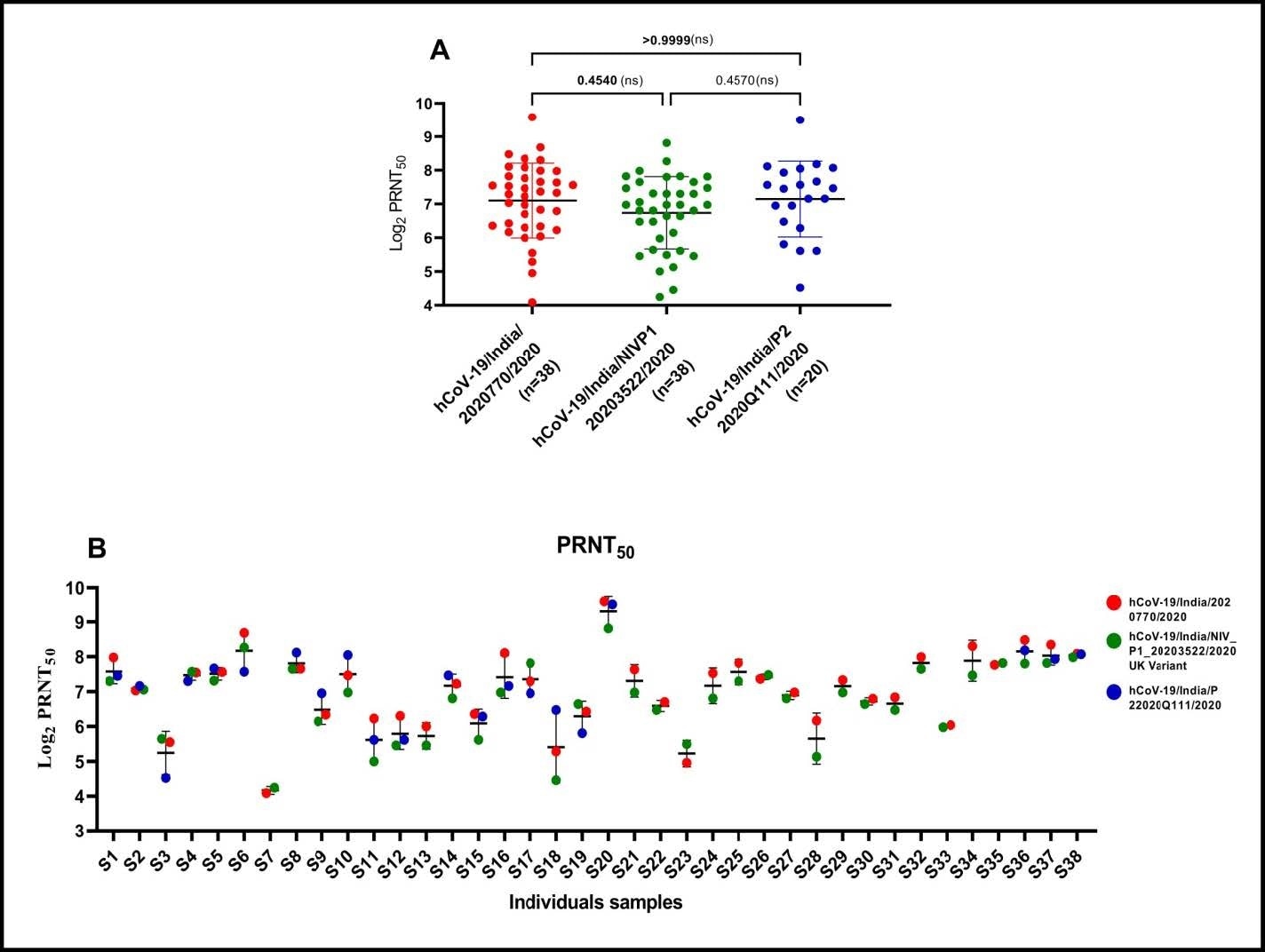 The current study reports the results of neutralization testing of serum samples obtained from phase II trial participants against the UK variant.

The researchers first isolated and sequenced the UK variant from UK-returnees in India. The isolate hCoV-19/India/20203522 displayed all the characteristic mutations found in SARS-CoV-2 (VOC) 202012/01.

Earlier studies have shown that the UK variant evaded neutralization with convalescent plasma containing high titers of neutralizing antibodies. This was demonstrated to be because of the presence of the E484 substitution along with a subsequent 11-amino-acid insertion in the NTD N5 loop of the spike antigen.

This led to a great deal of uncertainty as to whether the current vaccines would neutralize the new variants. The current study alleviates such concerns by showing highly comparable neutralization activity of vaccinated individuals against the virus's homologous and heterologous strains. These results indicate that the mutations in the UK variant do not mediate immune escape to neutralizing antibodies elicited by Covaxin vaccination.

Covaxin has been rolled out in India's vaccination program, the largest in the world, along with the Indian-manufactured Oxford Astra-Zeneca vaccine, distributed under the name Covishield. The researchers say, "It is unlikely that the mutation 501Y would be able to dampen the potential benefits of the vaccine."