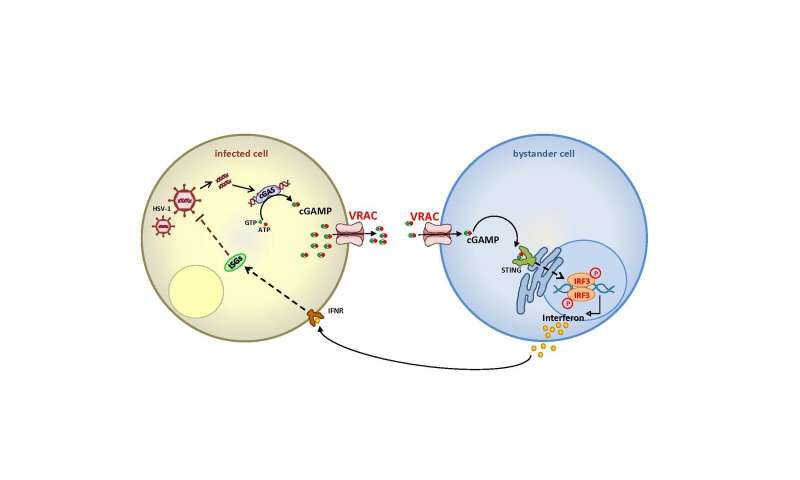 VRAC/LRRC8 chloride channels not only play a decisive role in the transport of cytostatics, amino acids and neurotransmitters. They can also transport the important messenger substance cGAMP from cell to cell and thus strengthen the immune response to infections with DNA viruses. This has now been demonstrated by Prof. Thomas Jentsch, who originally discovered LRRC8/VRAC channels and works at the Leibniz Research Institute for Molecular Pharmacology (FMP) and the Max Delbrück Center for Molecular Medicine (MDC) in Berlin, together with colleagues from Shanghai led by Prof. Hui Xiao. Since cGAMP is always formed when cells detect DNA outside their nucleus, the discovery is potentially of great importance for other pathologies such as cancer. The work has now been published in the scientific journal Immunity.

If DNA viruses such as herpes simplex infect human cells, it does not go unnoticed. In the cell interior, the so-called cytoplasm, DNA has no place. Thus, if DNA is detected there, messenger substances form and begin to sound the alarm. The foreign DNA binds to the enzyme cGAS, which synthesizes the ‘second messenger’ cGAMP. By binding to a receptor called STING, cGAMP activates a cellular signaling cascade that triggers the production of interferons and other factors of the innate immune system. This mechanism has also been observed in tumor cells, in which DNA fragments are released from the nucleus into the cytoplasm, as well as in some bacterial infections.

Research on cGAMP has exploded in recent years, partly because it not only acts in the cell where it is produced, but also passes on to other cells. However, it remains unclear how this happens. In cells that directly contact each other, cGAMP can pass through cell-connecting channels known as gap junctions. But what about cells that are not in the immediate vicinity?

Researchers led by Prof. Hui Xiao from the Institut Pasteur Shanghai had suspected that further transport pathways must play a role and came across the volume-regulated anion channel VRAC—the ion channel discovered in 2014 by Prof. Thomas Jentsch and his team, in parallel by Prof. Zhaozhu Qiu (now at Johns Hopkins University), who also contributed to the publication in Immunity. Together, the German-Chinese research team was able to demonstrate with a whole variety of methods that VRAC transports cGAMP both out of the producing cell and into the recipient cell. This leads to the production of interferons in cells that are not infected, thereby strengthening the immune response.

“We now know that VRAC definitely transports cGAMP” says Thomas Jentsch. “We didn’t know this function yet, but it fits well with our previous findings on VRAC, namely that it not only transports chloride, but also other small organic molecules, for instance, neurotransmitters, amino acids and cytostatics. The dependence of the cGAMP transport on the subunit LRRC8E—VRAC is always composed of several subunits—agrees well with our earlier findings, which showed that this subunit supports the transport of glutamate, which is also negatively charged.”

The uptake of the messenger substance by VRAC was verified by cell culture experiments and by electrophysiological approaches. In one experiment, for example, cells were infected with a DNA virus and separated from healthy cells using a filter. The virus infection could not be transmitted—but an interferon response was also observed in the non-infected cells.

Finally, experiments with knock-out mice generated in Berlin that lacked the VRAC subunit LRRC8E provided compelling evidence: If the rodents were infected with herpes viruses, a much higher viral load and lower interferon release were observed than in unmodified control animals. “This was exactly what we expected, because the messenger substance could no longer be transferred from infected cells to neighboring cells due to the absence of the channel. Since this transfer normally strengthens the immune response, the lack of cGAMP-transporting VRAC greatly reduces the defense mechanisms against such viruses,” explains Professor Jentsch.

The discovery of this new role of VRAC in the body’s defense system against DNA viruses, a new addition to the many important functions of VRAC, will attract even more attention to this ion channel. The researchers assume that VRAC might play a similar role in cancer. Indeed, others have recently shown in animal experiments that cGAMP transport from cancer cells to neighboring host cells enhanced the immune response against tumors—but how cGAMP is transported had remained unclear.

Besides VRAC and gap junctions, a folate transporter also transports cGAMP across the membrane, as was shown last year. However, VRAC is found in more cell types and therefore probably plays a greater role. In the future, it might be a viable approach to activate VRAC to enhance the immune response. Possible ways to do this have already been described in the new work.