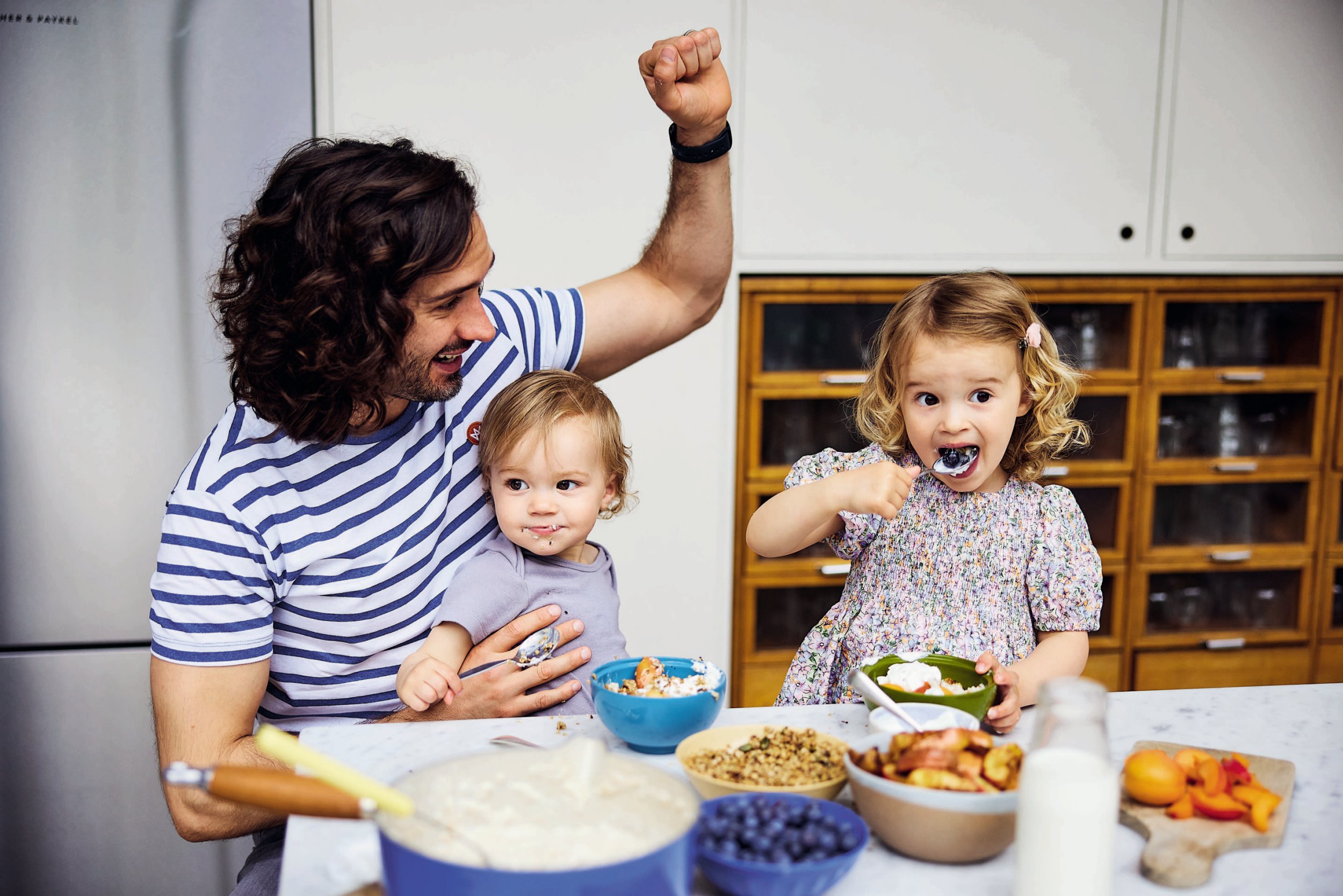 Joe Wicks first graced our phone screens as one of the new breed of fitness professionals who favoured clicks and shares over hard currency.

The floppy-haired hunk was whipping women into a frenzy with his talk about ditching diets, getting #Leanin15 and offers of free HIIT sessions.

Known as The Body Coach, Joe rose to fame with his quick recipes in 2015 and from there, he’s certainly taken the world by storm.

Among his accomplishments, he boasts a hugely successful YouTube channel, 10 best-selling cookbooks, a whopping 11 million social media followers and an MBE from the Queen for his PE services during lockdown to boot.

He has also helped over 700,000 people through his online training/meal plans and fitness app.

However, despite all these achievements, Joe hasn’t changed a bit. He’s still that full-of-life, cheeky chappy I interviewed back in 2015.

‘I remember you,’ he says when we talk. ‘We did a photoshoot once. You had me with my top off, hanging out of a tree in Holland Park and holding broccoli. I always look back and think, “Ah, the things I used to do in the early days.”’

Joe’s new cookbook is a slightly different direction from the usual quickie meals that made him famous. This time he focuses on eating to improve your mental wellbeing and as such, there’s over 100 recipes with details about mood-boosting ingredients inside.

Joe married former model Rosie Jones in 2019 and they have two children together, Indie, two years old, and 18-month-old Marley – and a new addition to the family is expected in September.

Writing on Instagram, Joe said recently: ‘Indie and Marley are super-excited about having a little brother or sister. We can’t wait to welcome them into the world.’
It’s definiately clear fatherhood agrees with him.

‘I love being a dad,’ Joe says. ‘It has its challenges, but it’s my favourite thing. I think my narrative has naturally changed as I have grown up and my motivation to exercise has shifted.

‘When I started it was very much about body image and getting lean, but since becoming a parent the reason I exercise now is because of the way it makes me feel. I have more energy, it makes me happier and it makes me a better parent.

‘For me, it’s the mental health benefits of exercise that draw me back now. It’s the same for my clients – reading the testimonials it’s the impact on mood that gets them up in the morning and doing a workout.’

While Joe admits that inspiration for new recipes is getting harder, he’s thrown in some curveballs like a strawberry cauliflower smoothie (a great one for kids) and is bringing golden oldies (filo pie) back to life.

The recipes are wholesome and this seems like a natural progression for the 36-year-old, who says his troubled childhood has shaped his culinary journey – his mum suffered from OCD and had an eating disorder and his dad was a heroin addict.

‘My diet was so linear when I was a kid,’ he explains. ‘I only started cooking and enjoying food when I was at university and that’s when a whole new world opened up to me.

‘Mum ran on Coca Cola and anxiety and we had loads of Iceland 2 for 1 chocolate. Our cupboards were packed with junk food and that’s all we lived off.

‘That had a massive effect on me as a kid and I was always super-hyper active. Looking back, I was probably running off sugar. I didn’t realise that my Mum had an eating disorder and neither did she until much later in life.

‘But I think I have really inspired her and now she cooks from the book. As a family, we have all gone on a nutritional journey and we’re in a better place.’

After recently discovering that 90% of the feelgood hormone serotonin was produced in the gut, Joe says that he now understands the importance of food for his mental wellbeing.

‘I’m aware of what foods make me feel good now, whereas a steak will slow me down a bit. I’ve always had one obsession, essentially since the day I met you [in 2015], and that’s to get people moving and feeling good.

‘Before I would never have had the confidence to talk about the importance of food and sleep for mental health, but I’ve realised my message can really help people, so I just keep going.’

As any new parent will tell you, sleep is the holy grail and Joe is no stranger to the odd sleepless night (and he can expect a few more come September!). So, he’s had to curb his evening Netflix and Call Of Duty time to avoid being grumpy and snappy with the kids the next day.

‘For me, sleep is the foundation that everything sits on. I’ve just started to appreciate it. When I do, I wake up naturally and feel good.’ From his roots as a personal trainer in his local park, Joe’s efforts to get the nation fit have culminated in world-wide tours and mass live events.

‘When I wake up and look at my house, I just think it’s mad. We were from a council estate. Just from taking photos of broccoli it’s amounted to so much and had such a positive impact.

‘I have so much more to offer, though. I get so many opportunities, but I ask, “Is this actually going to help the mission?” And if the answer is no, then it’s not for me.

‘I’ve always thought you should double-down on what you’re good at and I’m good at food and fitness.’

Joe, you certainly are, and we wouldn’t change you for the world.

Feel Good Food by Joe Wicks is published by HQ, HarperCollins and is available now in hardback and eBook.