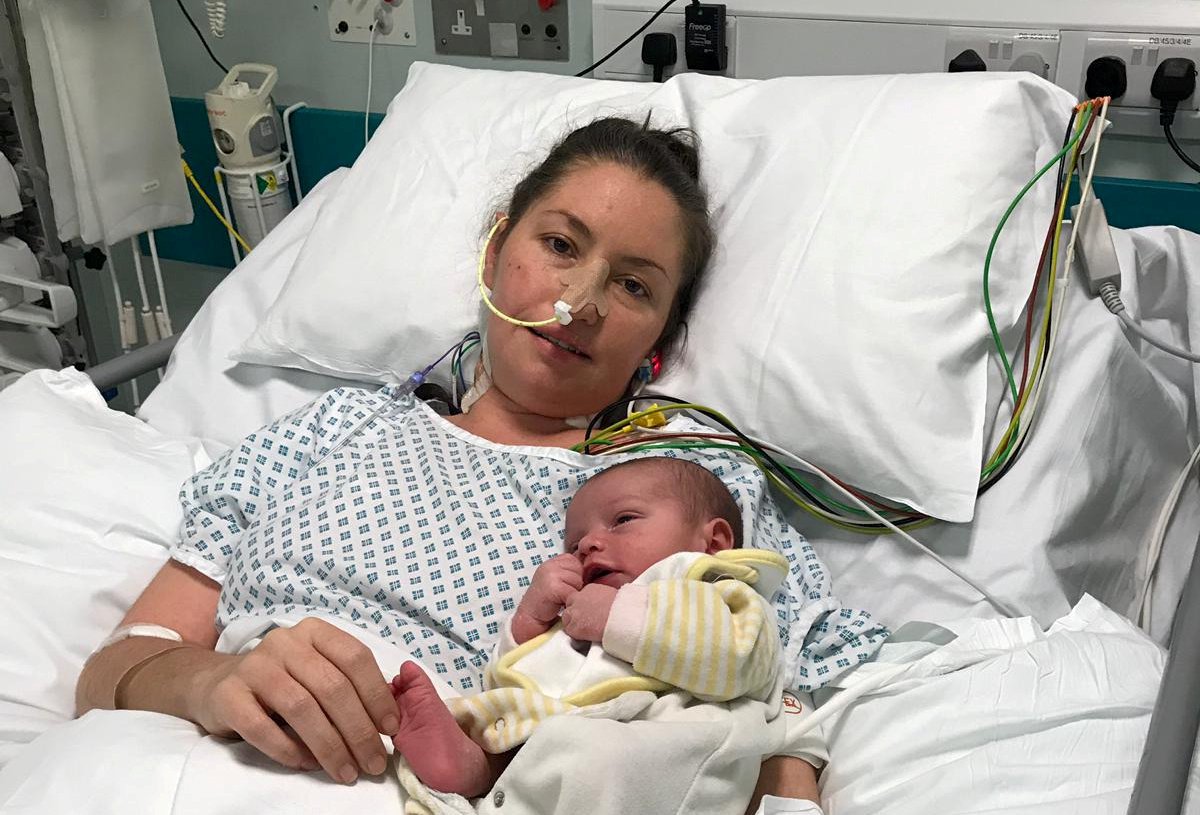 A mum who was left fighting for her life after falling ill with sepsis during childbirth says she was told by a midwife that she ‘probably had the flu.’

Shelly Young, 33, is now demanding answers after continuing to suffer from the effects of sepsis two years after her diagnosis.

Her trauma began when she gave birth to her son Maxwell in November 2019, but signs of her deadly infection were not recognised by medical experts.

Four days after undergoing surgery to remove placenta which became stuck when she gave birth, Shelly found herself back in hospital, desperately unwell.

The young mum was placed in an induced coma, and had further emergency surgery to remove an ovarian abscess – believed to be the source of the infection.

Overall, Shelly spent 11 days in intensive care – including eight in a coma. She also lost part of her left ear after developing a pressure sore from an oxygen clip, and she still suffers from PTSD.

Shelly, from Thatcham, Berkshire, has now sought legal advice and said lessons must be learned by the Royal Berkshire NHS Foundation Trust.

‘What should have been a happy time for me and Kyle has been totally overshadowed by everything that happened to me,’ says Shelly.

‘It should have been such a special and precious time getting to bond with Maxwell.

‘Instead, I was in a coma in intensive care fighting for my life. I can only imagine the pain Kyle and the rest of my family were going through at that time.

‘While it’s nearly two years ago, I continue to be very upset and traumatised by what happened. It’s still hard not to get angry and emotional.

‘However, in a way I know I’m lucky as I’m still here with my family and things could have worked out very differently.’

Shelly, who has three other children, Olivia, Freddie and Alexander, says she now suffers with constant pain, including in her chest, and muscle spasms and weakness.

She has also been diagnosed with post-traumatic stress disorder, post-intensive care syndrome and post-sepsis syndrome.

During an at home appointment with a maternity support worker two days before her re-admission, Shelly complained she was struggling to walk and was in incredible pain.

A report published in November noted that she said that she was violently shaking, had a high temperature and was very confused.

According to the report, the maternity worker said Shelly ‘probably had the flu.’

There was no evidence that Shelly’s concerns were flagged to more senior staff, which a report has since said to be a clear failure of duty to the vulnerable young mother.

After being re-admitted to hospital, Shelly reportedly didn’t receive vital antibiotics for seven hours, despite her GP highlighting her signs of sepsis, a treatment that would have easily cured her condition.

After two days in hospital, she was admitted to intensive care after she continued to deteriorate.

Shelly, who is married to her husband Kyle, aged 33, was eventually discharged on 2 December.

‘Sepsis is an absolutely horrendous condition and more has to be done to raise awareness of how dangerous it is. I just hope that by speaking out I can help others,’ adds Shelly.

A report has since suggested that maternity support workers and maternity staff should undergo sepsis training, as well as being expected to document all patient concerns in notes.

Signs of sepsis include: Slurred speech, confusion, extreme shivering and muscle pain, passing no urine in a day, severe breathlessness and mottled or discoloured skin.

‘They indicate that more still needs to be done to raise awareness of the signs and symptoms of sepsis. While incredibly dangerous, early diagnosis and treatment are key to beating it.

‘While nothing can make up for her ordeal Shelly hopes she can help make others aware of the signs of sepsis by sharing her story.

‘We welcome the Trust’s pledge to learn lessons from what happened to Shelly. It’s vital that these are now upheld to improve patient safety.’