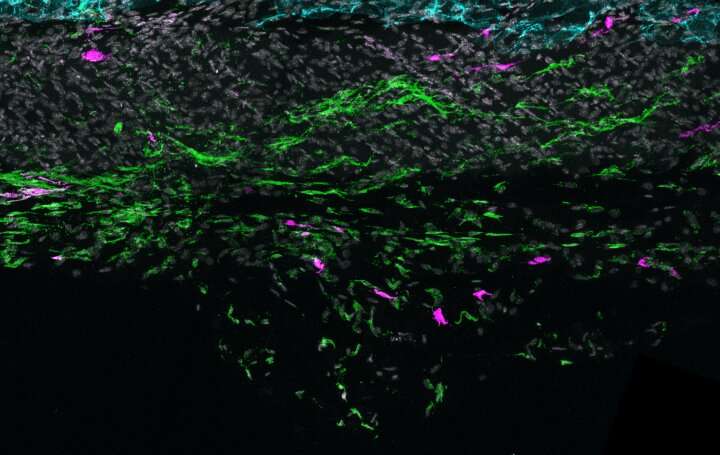 The surprise discovery of a new type of cell explains how distress to the skin early in life may prime a person for inflammatory skin disease later, according to a new study by UC San Francisco researchers in the Oct. 27 issue of Nature. Knowledge of this new cell type will likely lead to greater insight on how to reverse autoimmune disorders such as scleroderma, and shed light on the nature of inflammatory disease in general, the researchers said.

“The results reinforce the idea that what you’re exposed to initially may have lasting ramifications,” said Michael Rosenblum, MD, Ph.D., principal investigator on the study. “It appears that early exposure to inflammation can, through these cells we discovered, imprint an ability for tissues to develop inflammatory disease later in life.”

The team learned about the new type of cell while investigating the effects of a set of actions known to evoke immune response in mice. One of these actions involved knocking out a group of skin cells that suppress the immune system. In the absence of that regulation, Rosenblum said, the researchers saw the presence of a unique cell that seemed to be acting as a shelter for pathogenic immune cells that aren’t usually seen in skin tissues.

“We had to knock out one cell population to see that they were controlling the growth and capacity of these other, unknown cells,” he said, noting that the new cells became apparent only in the tissue that had been exposed to inflammatory triggers. “What normally would be a deserted island on the skin was now inhabited by all these strangers,” he said.

The team dubbed the strangers “TIFFs” (Th2-interacting fascial fibroblasts) after the Th2 immune cells that they help to house. The location of TIFFs in the skin suggests that they belong to a group of cells that make up fascia, the fibrous connective tissue that surrounds and connects organs throughout the body, said lead author Ian Boothby, a graduate student in Rosenblum’s lab.

“Because most organs have fascia of some sort, what we’re learning about TIFFs in skin may well be widely applicable to the rest of the body, meaning that these cells may play a role in a huge number of inflammatory diseases,” he said.

Boothby and Rosenblum saw that when the skin lacking regulatory cells is subjected to inflammatory triggers, the population of TIFFs expands like wildfire, and the TIFFs become a sort of holding pen for the Th2 immune cells. Later in life, when even a small insult to the skin presents itself again, Rosenblum said, the TIFFs open their floodgates, letting the Th2 cells out.

“All you need to do is push the immune system just a little bit, with a wound or with stress, to unleash all the pathogenic cells living in these TIFFs and create an exaggerated inflammatory response,” he said.

That exaggerated response, the researchers hypothesize, may manifest as the creation of fibroses in the fascia, the driving force behind inflammatory skin diseases such as scleroderma, which affects about 50,000 Americans.

The team’s next move was to confirm the presence of TIFFs in human skin. They obtained samples from volunteers with eosinophilic fasciitis (EF), a rare inflammatory disorder in which white blood cells called eosinophils build up in the skin fascia, the fibrous tissue which lies between the skin and the muscles below it.

When they compared the EF samples to those of healthy skin, the researchers found TIFFs in both types of skin sample, but the two looked completely different. In healthy skin, the fascia forms a thin, spidery network between fat cells, while in the EF skin sample, the cells had expanded to form thick bands of fibrous tissue.

It turns out that TIFFs are present in every organ of the body, said Rosenblum. They’re usually found in the fascia that surrounds our major organs and serve a role in maintaining structure. They’re also prone to interacting with immune cells. He postulates that TIFFs might have evolved as a sort of emergency brigade in case of injury, able to jump-start repair in the case of internal injury.

“In patients with scleroderma or other fibrosing diseases like EF, that repair program may be kind of co-opted, resulting in this chronic wound-healing response,” said Rosenblum. “If we can understand the biology of these cells, we can come in with drugs that revert them back to what they’re supposed to be doing.”

Taking that approach is vital to addressing the broad array of inflammatory diseases for which there are often no good treatments.