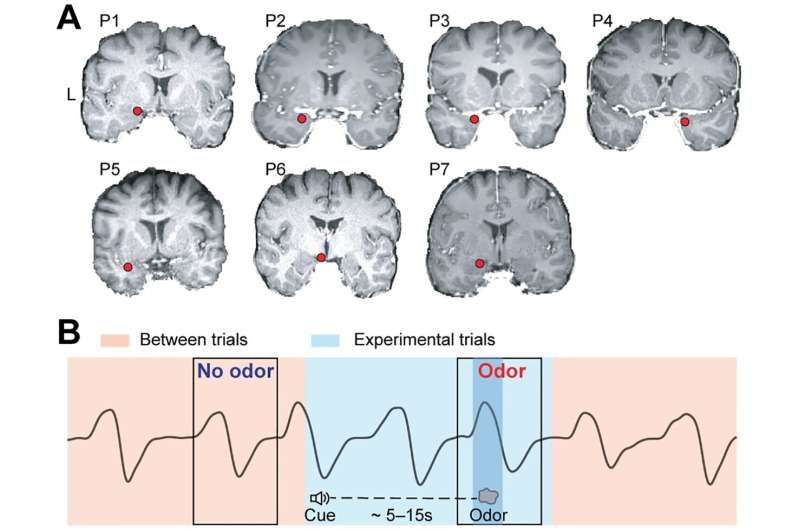 Neural waves of three distinct registers combine to give the brain a picture of what’s being smelled, according to a Northwestern Medicine study published in PLOS Biology.

This is a full characterization of neural oscillations that happen in the olfactory cortex when an individual smells an odor, providing a platform for further study of olfactory processing, according to Christina Zelano, Ph.D., assistant professor in the Ken and Ruth Davee Department of Neurology in the Division of Epilepsy and Clinical Neuropsychology and senior author of the study.

“We don’t understand how odors are represented in the human brain,” Zelano said. “It’s a fundamental question and one that we’re helping answer.”

Previous studies have cataloged other senses in the body using low-frequency oscillation to improve perception. Neurons in visual and auditory systems usually operate at a background hum of excitability, but when the brain is trying to see or hear something, these neurons are activated in sync.

Previous studies from the Zelano laboratory have found similar low-frequency oscillations in the olfactory cortex. Deep in the brain, the olfactory cortex is difficult to study, but Zelano and her colleagues were afforded a unique opportunity by the Northwestern Medicine Comprehensive Epilepsy Center’s epilepsy monitoring unit, directed by Stephen Schuele, MD, MPH, chief of Neurophysiology and Epilepsy in the Department of Neurology and professor of Physical Medicine and Rehabilitation, and co-author of the study.

Some patients with epilepsy suffer from intractable seizures and choose to undergo brain surgery to help reduce seizure frequency. Before the procedure—performed by Joshua Rosenow, MD, professor of Neurological Surgery, Neurology, Physical Medicine and Rehabilitation and a co-author of the study—patient’s brains are mapped using electrodes implanted deep in the brain. The patients spend about a week in the epilepsy monitoring unit. This is one of the only times that real-time brain wave data from the human olfactory cortex are available, Zelano noted.

In the current study, investigators conducted tests with volunteers in the monitoring unit, warning volunteers an odor was coming and then administering the odor, and measuring the resulting brain activity.

Further, the strength of the high-frequency waves was associated with volunteers’ ability to correctly identify odors.

“This implies the higher-frequency oscillations are required to actually distinguish the odor one is smelling,” Qiaohan Yang, MS, student in the Northwestern Interdepartmental Neuroscience Program (NUIN) and lead author of the study.

This improved understanding of olfactory brain wave composition will allow scientists to better characterize how the olfactory cortex processes information, both in normal individuals and in disease, Zelano said.