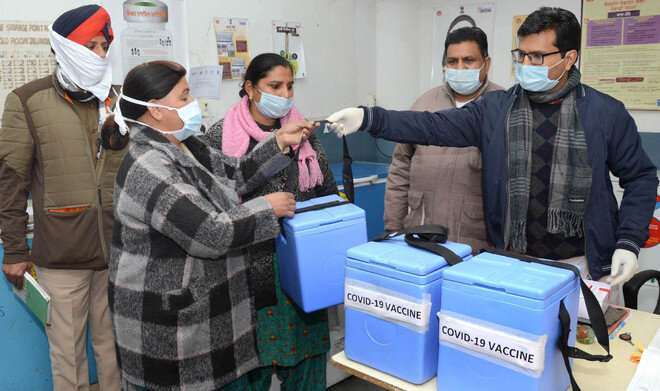 The emergence of Omicron, a rapidly spreading new strain of COVID-19, a year after the world embarked on mass-vaccinations against the pandemic, has put paid to Nishant Balan’s plans to return to the United Arab Emirates to resume his contract business.

The reason? His work recently carried him to South Africa, where Omicron emerged.

“I may now have to fold up my contract business altogether since I have already overshot many deadlines and am running up losses by the hour,” said Balan. “And then there is no telling when the restrictions around Omicron are going to be lifted.”

Omicron, which carries 50 mutations, most of them in the spike protein which helps the virus infect human cells, popped up in early November. Since then, the strain has spread to 23 countries, forcing many to reimpose travel restrictions, tighten surveillance and study the variant’s vulnerability to existing vaccines.

Said Manu Raj, a top epidemiologist based in Kochi, India: “Africa was begging for vaccines and none of the rich countries listened—they just piled up more than they needed. Any country that lags in vaccination will likely produce more mutations.

“Now Mother Nature is giving it back to those deaf ears. The world will need to be more equitable than this, or we will keep seeing bad things,” said Raj, a professor at the School of Medicine, Amrita University, Kochi.

India, where the highly contagious Delta variant emerged at the beginning of the year, learned the hard way the consequences of being tardy on vaccinations. A major vaccine manufacturer and exporter, India responded to Delta with free vaccinations only by 21 June. By then an estimated four million people had died as hospitals were overwhelmed and supplies of essential medicines and oxygen ran out.

Manohar Agnani, additional secretary in the Union Health Ministry, said at an interactive webinar on 12 November that “nearly 80 percent of the eligible [adult] population in India has been vaccinated against COVID-19 with a first dose while 38 percent has been full vaccinated.”

According to an official release, India’s central government had by 27 November distributed 1.3 million doses to various states and had a stock of 221.7 million doses. India’s extensive sero-surveys suggest that 70 percent of the 1.4 billion population had acquired COVID-19 antibodies by April.

Better availability of vaccines in India in recent months has allowed a ramping up of the vaccination drive and a streamlining of the vaccine supply chain across the vast country, according to the release.

“COVID vaccines are holding out—we are not seeing breakthrough infections, we have a high seropositivity rate and antibody presence,” said Randhir Guleria, director of the All India Institute of Medical Science, speaking at a public function in the capital on 24 November.

India’s first cases of Omicron infection, that of a medical doctor and a South African national, were announced at a media briefing on 1 December by the union health ministry. An official said there was no cause for panic as “all Omicron related cases were found to have mild symptoms so far.”

“For a country where every other person is infected and the majority of those remaining are vaccinated, this is no news to be afraid of,” said Raj.

“While it is inevitable that new strains will emerge, as they do with influenza, it is not clear if they will all pose the same risk that we saw with the Delta variant,” said Ramanan Laxminarayan, epidemiologist and founder and director of the Center for Disease Dynamics, Economics and Policy in Washington DC.

“Viruses generally evolve in the direction of reduced virulence and if that happens with SARS-COV-2, then we could see the proliferation of a strain that is easily transmissible but that causes only mild infections,” Laxminarayan told SciDev.Net. “Regardless, our best bet is to increase vaccination coverage since they are protective, at least partially, against novel strains as well.”

India, compelled to suspend vaccine exports in March, has now resumed supplies to other countries. India’s leading manufacturer, the Serum Institute of India, said in a press release on 26 November that the first batches of its COVISHIELD vaccine, manufactured under license from AstraZeneca, were on their way to low- and middle-income countries via the COVAX Facility—a global mechanism created to ensure equitable distribution of COVID-19 vaccines.

“These donations are unpredictable and erratic and many countries have had to deal with periods of too many doses and those with stock outs,” she said.

According to Kyobutungi, the WHO’s target of vaccinating 10 percent of the population of every country by September was too low to achieve herd immunity against SARS-COV2.

“One needs about 90 percent of the population fully vaccinated,” she said.

“Most African countries will not even meet the low targets they had set for themselves,” added Kyobutungi, citing failure to access enough doses as the key factor behind low vaccination rates.

Countries such as Burkina Faso, Gambia, Democratic Republic of Congo, Central African Republic, Madagascar, Niger, South Sudan, Sierra Leone and Uganda have less than one percent of their populations fully vaccinated, she observed.

“Africa has been short-changed by the rest of the world. Without its own vaccine development and manufacturing capacity, it has been at the back of the queue,” Kyobutungi told SciDev.Net. 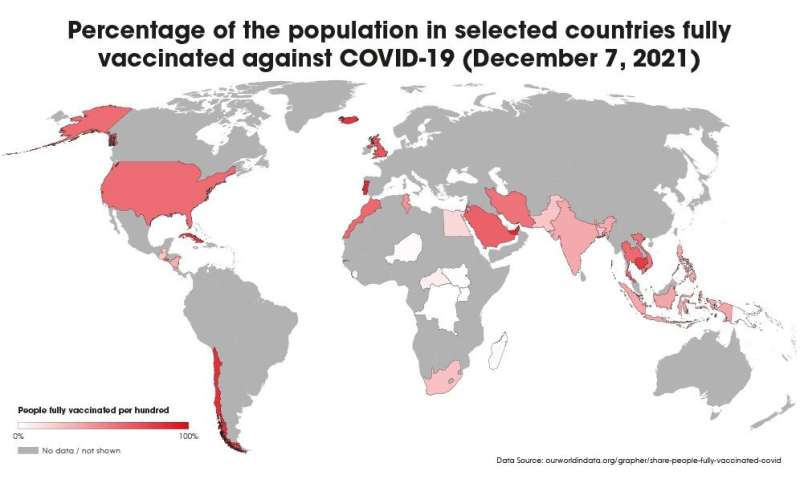 According to the WHO, nine African countries, including Morocco, South Africa and Tunisia had reached the 10 percent goal at the beginning of September and by the end of the month six more countries had achieved or surpassed that target. Mauritius and Seychelles recorded over 60 percent of their population vaccinated.

Nigel Garett, head of pathogenesis and vaccine research at the Centre for the AIDS Program of Research in South Africa said that the fault lies in African countries “not being seen as a commercial market by prominent vaccine companies especially companies producing mRNA vaccines.”

Garett tells SciDev.Net that uncertainties about vaccine effectiveness on variants of concern had also delayed many vaccine rollouts in Africa.

“Poor access to testing facilities means that the confirmed cases are a fraction of actual cases,” said Kyobutungi, adding that while deaths may be underestimated, they are a more accurate indicator of what’s going on in the population.

WHO’s new target of getting 40 percent of the population of each country vaccinated by December end has a far better chance of success in the Eastern Mediterranean and Latin American regions than in Africa.

The December goal is considered a key step to the WHO Strategy to Achieve Global COVID-19 Vaccination which aims to have 70 percent of the world’s population covered by mid-2022.

Diplomacy in the Middle East

Of the 22 countries in WHO’s Eastern Mediterranean region, seven countries achieved the December-end target ahead of time while seven more countries are on the way to achieving it, said Amjad Al Khouli, WHO epidemiology advisor in the Middle East Region. But the other eight countries in the region are struggling to catch up, he said.

The success in the Eastern Mediterranean region with its 679 million people owes a lot to authorities who have been actively countering an ‘infodemic’ of fake news, which initially caused vaccine hesitancy among many residents.

That situation has now changed, according to a recent regional study conducted in all the 22 countries which showed a high level of acceptance of COVID-19 vaccinations.

Conflicts in the region were another matter. “The main reason for the situation in countries that are far from achieving the goal is the fragility of the health systems, the atmosphere of conflict, and the repercussions of various emergencies,” Al Khouli said.

WHO is now making efforts, with the cooperation of governments in the region, to overcome different obstacles, said Al Khouli. For example, in conflict areas, a “Health Diplomacy” program is taking advantage of ceasefire periods to deliver vaccines and health services.

These efforts resulted in a significant increase in vaccine supplies to low- and lower-middle-income countries in the region during the last quarter, said Al Khouli. “One-third of the total doses provided by the COVAX facility to the Eastern Mediterranean Region have been over the past four weeks.”

Egypt, which had a difficult start in January because of vaccine hesitancy, is now on track to achieve the December target. Mohamed Ali Ezz Al Arab, medical advisor, Egyptian Centre for Right to Medicine, tells SciDev.Net that vaccination rates have reached 12 percent and that the government was “striving hard during to reach the target of vaccinating 40 percent of the population by the end of 2021.”

In Latin America, 48 percent of the population in major countries now stands immunized. Chile had by mid-November had vaccinated 82 percent of its people, followed by Uruguay with 76 percent. Also showing high vaccination rates were Cuba with 72 percent, El Salvador, 61 percent, Argentina, 60 percent and Brazil, 59 percent.

However, many countries in the region are also showing low vaccination rates. “We had access difficulties from the beginning,” Jarbas Barbosa da Silva, assistant director of the Pan American Health Organization (PAHO) told SciDev.Net.

According to PAHO, vaccination is at a standstill in about nine countries, while Guatemala, Jamaica, St. Vincent and the Grenadines, Nicaragua and Haiti are showing below 20 percent coverage, said da Silva, adding that during the early stages, rich countries had cornered the entire production of Pfizer and Moderna, ignoring the COVAX Facility.

In addition, AstraZeneca had significant shortages, as India the main manufacturing contractor, suspended exports in March. “Latin America should have received 80 million doses from that producer this year but did not get even 10 percent,” Barbosa explained.

“COVAX was not able to leverage its negotiation capacity, which should have been the sum of the purchasing power of several countries,” said Felipe de Carvalho, Access Campaign Coordinator at Médecins Sans Frontières (MSF) Brazil.

With delays continuing, Latin American countries have turned to manufacturers in Russia (Sputnik V) and China (Sinovac, Sinopharm) and some are also working with public and private institutions in Argentina and Brazil to develop mRNA vaccines as part of a strategy to reduce vulnerability and dependence.

In late November, Brazil recorded two cases of Omicron infection, the first in Latin America, adding to concerns of rapid spread of the new strain, especially in countries of the region with low vaccination rates.

WHO director general Tedros Adhanom Ghebreyesus said at a special session of the World Health Assembly on 29 November that while every country had a responsibility to protect its own people, uneven vaccine distribution would allow the COVID-19 virus to “spread and evolve in ways we cannot predict or prevent.”

Tedros’s words have particular meaning for Nishant Balan who now faces financial ruin as a result of the brief trip he made to South Africa early November.