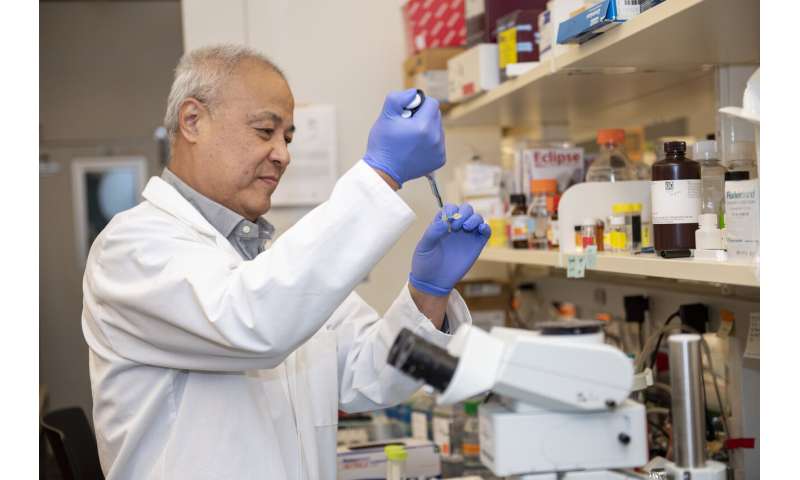 A targeted therapy, currently being studied for treatment of certain cancers including glioblastoma, may also be beneficial in treating other neurologic diseases, a study at the University of Cincinnati shows.

The study, being published online April 6 in the journal EBioMedicine, revealed that the effects of a therapy delivery system using microscopic components of a cell (nanovesicles) called SapC-DOPS may be able to provide targeted treatment without harming healthy cells. This method could even prove to be successful in treating other neurologic conditions, like Parkinson’s disease.

One neurological challenge that may benefit from the therapy, Gaucher disease, is “a serious and rare genetic condition in which a type of lipid accumulates in cells and certain organs. The disorder can cause bruising, fatigue, anemia, low blood platelet count and enlargement of the liver and spleen, as well as poor coordination, seizures and cognitive problems in some patients; it is caused by a hereditary deficiency of a certain enzyme,” says Qi, who is a corresponding author on the study. “Patients need enzyme replacement therapy to treat this condition, but a major limitation of FDA-approved enzyme replacement therapy is failure to cross the blood-brain barrier in the body. Therefore, the treatments available are only effective for patients who have Gaucher’s affecting their internal organs, like their livers and spleens, but not their brain or nervous system.

“[Certain] nanovesicles have the ability to cross the blood-brain barrier and selectively target brain tissue, providing a biological vehicle for delivering the enzyme replacement therapy.”

In the early 2000s, Qi developed SapC-DOPS, a combination of a cell protein, SapC, and a phospholipid, DOPS, that assembled into tiny cavities can selectively target cells and deliver therapies while sparing all other unaffected cells and tissues. In the past, he has studied that nanovesicle in cancer animal models looking at brain, lung, skin, prostate, blood, breast and pancreatic cancers. Results were promising, and now the human version of this nanovesicle is now being studied in clinical trials for treatment of glioblastoma.

This study shows its penetration into the brain is through a specific receptor and the lymphatic circulation system, which helps rid the body of toxins and waste.

“In this study, we showed that the nanovesicle was able to deliver the enzyme to the necessary tissues in animal models, especially the brain,” Sun says. “This novel therapeutic approach corrects the deficiency of the enzyme in central nervous system cells and tissues and is efficient in reducing inflammation and neurological issues in animal models with [some types of] Gaucher disease.”

“Our study presents a new targeted use for our nanovesicle and provides a new strategy for treating this type of Gaucher disease,” Qi adds. “This is the tip of the iceberg when thinking about applications and it could mean promising treatments for other neurologic conditions.