The global spread of the coronavirus disease 2019 (COVID-19) pandemic, caused by the severe acute respiratory syndrome coronavirus 2 (SARS-CoV-2), has led to intense interest in the various manifestations of the infection, including its neurological features. A compact summation by researchers across the UK of what is known at present about this facet of the disease is presented in a new paper, which has been released on the medRxiv* preprint server­.

Many earlier reports have been small and retrospective in design, reflecting the need to obtain some early information in the face of a rapidly spreading viral infection. These were succeeded by larger multicenter prospective studies that are currently underway. 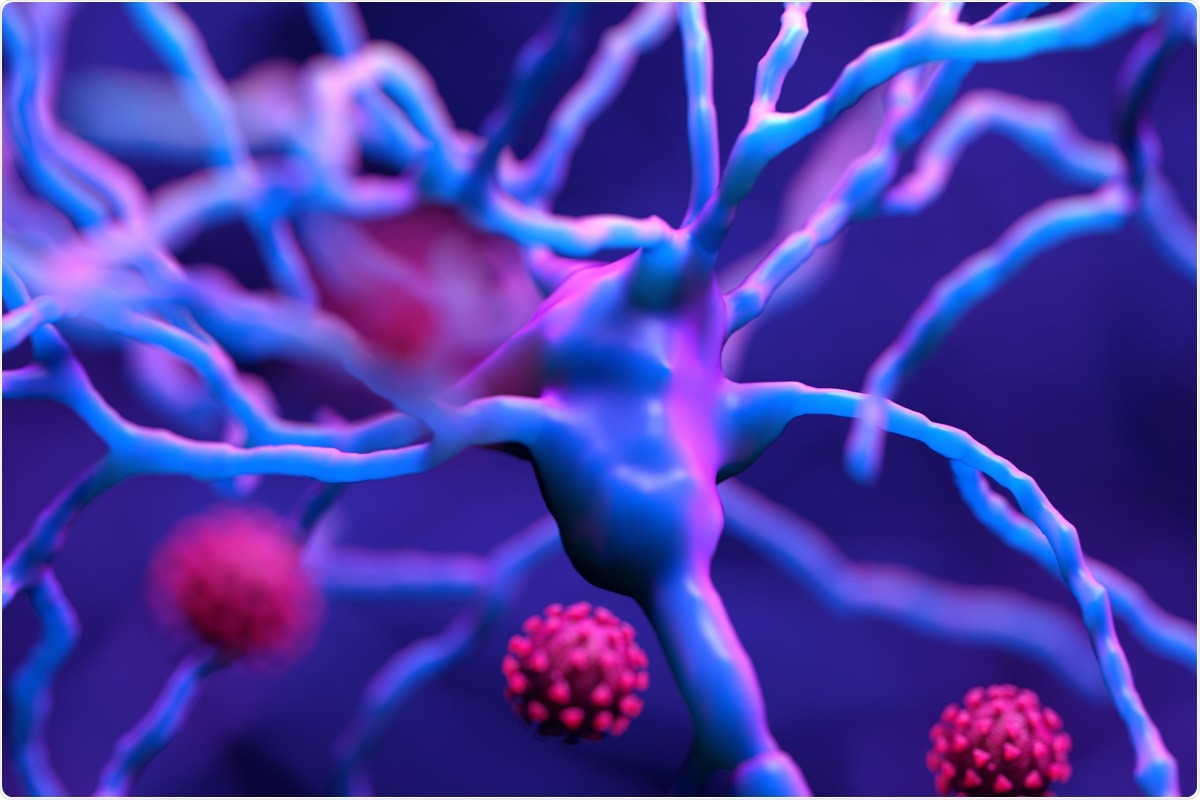 The current paper details the team’s aim to bring out a new platform that will allow this area of the pandemic disease to be assessed and revised in real-time. Beginning in May 2020, the researchers reviewed all kinds of relevant scientific literature dealing with neurological symptoms, associated clinical features, and potential pathogenetic mechanisms in the form of a weekly blog.

This blog is called “The neurology and neuropsychiatry of COVID-19” and appears on the Journal of Neurology, Neurosurgery and Psychiatry website. Taking their work one step later, the researchers compiled the evidence as a systematic review and meta-analysis, termed “Systematically Analyse and Review Studies of COVID-19 Neurology and neuropsychiatry” (SARS-COVNeuro).

Methodology of early literature in this field

The most common study type was case series. When classified by the beginning of data collection, they found that 65 and 115 studies were ‘early’ and ‘late.’ These began to collect data between December 2019 and February 2020, and between March 2020 and July 2020, respectively.

Of the early studies, 57% were case series, but only 35% of later studies. Most are single-center studies and involve hospitalized patients in above half and two-thirds of early and late studies, respectively.

There were 18 studies with a thousand or more participants. Altogether, there were over 1,00,000 participants. High-quality studies made up only 11% of the total, with 46% being moderate and 44% low quality.

The first cohort study appeared at least two months after the initial outbreak of SARS-CoV-2 in Wuhan, China. Overall, the studies come from China, the USA, Italy and France, with China being by far the largest contributor.

The meta-analysis included 20 or more neurological or related manifestations described by three or more studies. Altogether, this included 147 studies, with almost 1,00,000 patients.

However, the order of prevalence was, in descending order, anosmia, weakness, tiredness, dysgeusia and muscle pain. These were reported to be present in 43% of patients, for anosmia, down to 25% for myalgia.

Inter-study variability ranged from very high (over 90%) for 13 of these symptoms to less than 50% for five manifestations. Many studies merely recorded the presence or absence of these symptoms.

Depression and anxiety were reported in 23% and 16%, respectively, indicating their high prevalence. Strokes and seizures were much less common, at 2.3% and 006%, respectively.

Among the subgroups, the researchers found headache, myalgia, anosmia and dysgeusia have been reported at much higher rates in prospective compared to retrospective studies. When analyzed by clinical severity, the study reports a higher prevalence of headache, myalgia, dysgeusia and anosmia in less severe patient groups.

In this largest of all available systematic reviews of the neurological manifestations of COVID-19, the researchers found that most of the symptoms were non-specific, indicating the systemic nature of the illness. Specific symptoms relating to the nervous system, such as seizures, altered mental status, depression and anxiety, and sleep disorders, were not studied as frequently.

While depression and anxiety were less studied, their prevalence was high. Organic diseases, such as strokes and seizures, were much less common.

The researchers indicate that the design of the study, as well as the severity of the disease and the country where the study was carried out, affect the frequency with which a symptom is reported. Especially for non-specific symptoms, including anosmia and dysgeusia, the prevalence is much higher in prospective studies.

Retrospective studies may help to capture associations but lead to underestimation of symptom prevalences, especially with symptoms like those in the current study. Thus, even under emergency conditions, it is necessary to bring out prospective studies at a much higher speed than has been achieved with the current pandemic.

Attention should also be paid to paring down unnecessary and potentially cumbersome regulations governing such studies, especially in pandemic situations and where the studies are not interventional in design. This would help to carry out research rapidly, where the results are available in a time frame that allows their application to ongoing policy decision-making.

Outpatient surveys are also required, and more attention should be paid to the more severe symptoms, unlike what was found in this review. “A rebalancing would be welcome with greater attention given to major neurological and neuropsychiatric disorders.”

High-quality studies were few, limiting the quality of the evidence. The long-term impact of COVID-19 on neuropsychiatric health is also an open question, which can be addressed only by prospective cohort studies.

If there is a real increase in the incidence of these complications, services and facilities need to be set up to anticipate the increase in neuropsychiatric cases, especially if they become chronic. Such care must begin in the acute phase, given that non-specific features are so common as to suggest that neurological and neuropsychiatric manifestations are the norm in COVID-19.

And finally, “Although long-term evidence from this earliest literature was sparse, it gives some initial indication that the symptoms described in ‘long COVID’ may be a continuation of some of those experienced in the acute phase of the illness.”

medRxiv publishes preliminary scientific reports that are not peer-reviewed and, therefore, should not be regarded as conclusive, guide clinical practice/health-related behavior, or treated as established information.