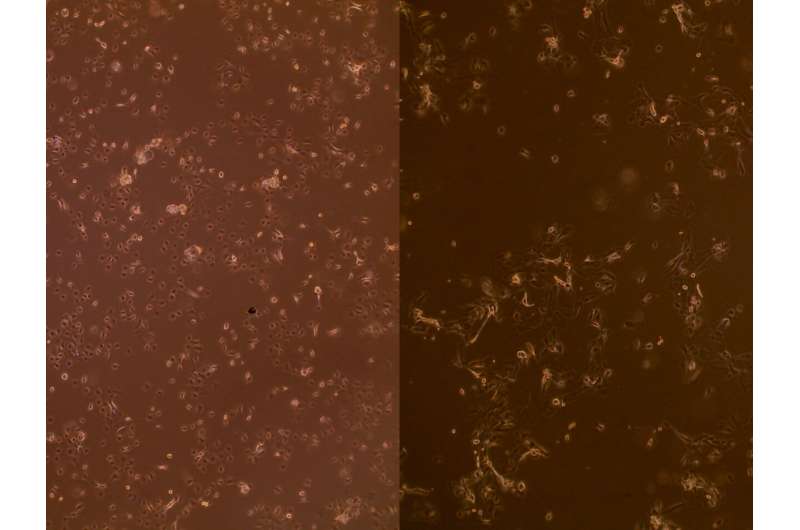 Infection with respiratory syncytial virus during infancy results in metabolic reprogramming of epithelial cells lining the airway, according to a Northwestern Medicine study published in the journal Viruses.

This mechanism may explain why childhood infections from respiratory syncytial virus (RSV) are associated with dramatically higher rates of asthma and other wheezing illnesses, said Sergejs Berdnikovs, Ph.D., associate professor of Medicine in the Division of Allergy and Immunology and co-senior author of the study.

“We think these metabolic changes could be the big elephant that’s been hiding, which could explain this connection,” Berdnikovs said.

RSV is a seasonal pathogen that infects the respiratory epithelium, the lining of the respiratory tract. The illness is common among infants and while the association between childhood RSV infection and later asthma has been repeatedly demonstrated, a causal mechanism has not yet been found.

In the current study, Berdnikovs, along with his collaborators at Vanderbilt, sampled epithelial cells from children between two and three years of age. Investigators obtained samples from children with and without prior RSV infection, and performed metabolic screening on both samples to identify any differences.

The scientists discovered that epithelial cells from children infected with RSV in the first year of life consumed much more glucose compared to normal cells. While this increased consumption was not always reflected in making cell energy, it wasn’t wasted: The additional glucose was used to create building blocks for other enzymatic reactions.

This phenomena occurs in normal cells but it was happening to a much greater degree in previously-infected cells, a reflection of the host metabolic environment in which these epithelial cells matured, according to Berdnikovs.

“Our airways and lungs continue to develop after birth, so during this developmental period these cells have to adjust glucose uptake to meet the burden of infection,” Berdnikovs said. “It may become part of the developmental program.”

These metabolically “hyperactive” epithelial cells may lead to the development of childhood asthma, by disrupting the natural function of the airway epithelium as a barrier that separates and protects the body from substances in the air.