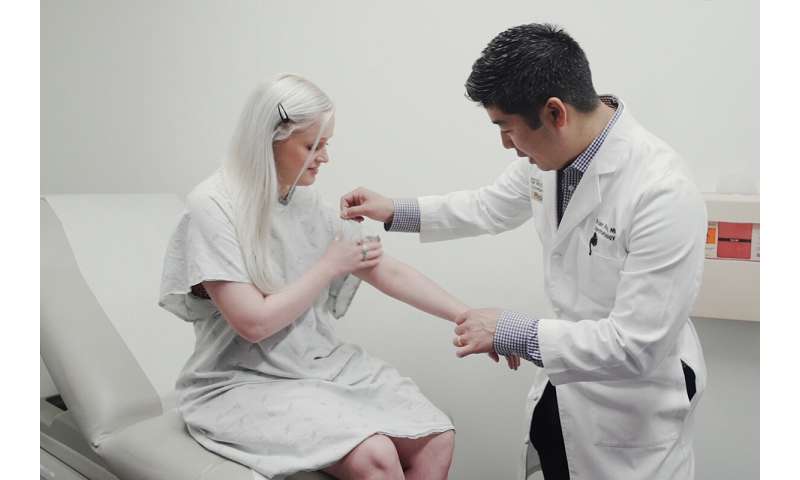 The aggravating skin condition eczema is most commonly treated by suppressing the immune system, but not all patients get relief. Now, a drug strategy aimed at revving up the immune system and boosting a type of immune cell known as natural killer cells appears, at least in mice, to effectively treat eczema.

The innovative approach, from researchers at Washington University School of Medicine in St. Louis, may point to a potential treatment for the skin condition, as well as other health problems linked to it, including asthma.

The findings are published online Feb. 26 in the journal Science Translational Medicine.

Natural killer (NK) cells—a type of immune cell—also are being evaluated as a cancer therapy. These cells play a particular role in attacking cells the immune system recognizes as foreign, including some tumor cells. In the new study, the researchers were surprised to learn that natural killer cells also effectively treated eczema in mice.

“If you look at the skin of the mice we studied, their eczema resolves in a way we haven’t seen before with other therapies,” said principal investigator Brian S. Kim, MD, a dermatologist and an associate professor of medicine. “And so far, our mouse model of eczema has accurately predicted what we will see in patients.”

At least 10% of the U.S. population has eczema, an itchy, splotchy rash that leaves many patients discouraged due to a lack of many effective treatments. Therapies for eczema include topical steroids, drugs called calcineurin inhibitors, and the monoclonal antibody drug dupilumab (Dupixent), all of which treat the rash by blocking part of the body’s immune response.

“Eczema is a chronic disease, and using steroids day in and day out is not advisable because it can contribute to thinning of the skin, which can contribute to other side effects,” Kim said. “Long-term use can lead to easy bruising and even stretch marks on the skin. We need more reliable treatments to bring relief, and we think boosting natural killer cells may be one way to do that.”

Kim, who also is co-director of Washington University’s Center for the Study of Itch & Sensory Disorders, said he has noticed over time that his patients tend to have very low levels of NK cells in their blood.

“We were perplexed as to why that might be, but the numbers were low enough, consistently enough, that eventually we started using them almost like a diagnostic tool,” he explained. “If we had any doubt about whether a person had eczema, we’d take a blood sample and look at their NK cell levels.”

With the study’s first author, Madison Mack, Ph.D., a graduate student in immunology at the time of the study, Kim took that clinical observation to the laboratory and a mouse model of the skin disease. After removing the animals’ ability to make NK cells, Mack noticed that markers of inflammation in the animals worsened. Later, when they used an investigational drug prototype to increase the number of NK cells in the animals, inflammation lessened, and the mice got better.

Kim said he believes that in addition to improving skin rash associated with eczema, boosting the numbers of NK cells could help restore immunity to viruses in eczema patients. People who have very low numbers of NK cells turn out to be more susceptible to the herpes virus, pox viruses and HPV viruses, among others.

Rather than revving up part of the immune system, the drug dupilumab, on the other hand, blocks part of the body’s immune response. The drug was approved for clinical use in 2017, and is safe, very effective and has helped many eczema patients improve, Kim said. Patients typically receive injections of the drug twice a month. However, about 60% of those treated with the drug in clinical trials did not respond as well as their doctors would have liked. In addition, some patients see improvement on most of the body but experience flare-ups on the face. There also are side effects in some patients, such as conjunctivitis.

Kim is eager to see if the strategy of revving up part of the immune system might help eczema patients. Investigational drugs that increase NK cell populations are being tested as treatments for some types of cancer in clinical trials at Siteman Cancer Center at Barnes-Jewish Hospital and Washington University School of Medicine. Kim said those studies suggest the drugs selectively boost NK cells, so he is now working with researchers from Siteman to test them in a clinical trial targeting eczema.