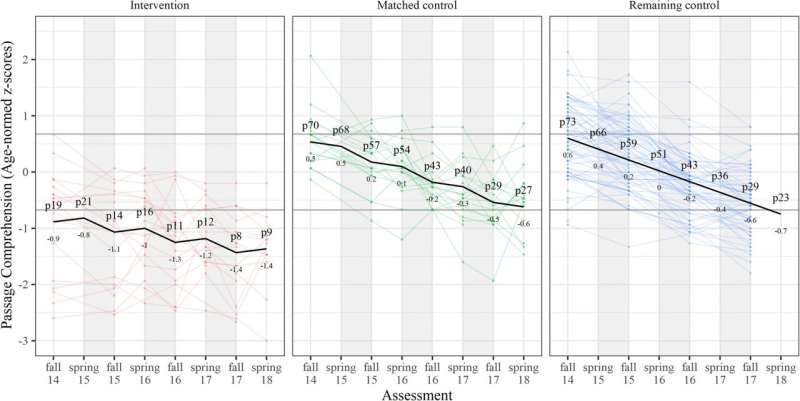 Yale researchers have found that prolonged school disruptions, such as those endured by so many children during the COVID-19 pandemic, resulted in a significant loss in reading abilities for disadvantaged children.

This was particularly true for the weakest readers, children often found to be dyslexic, who account for about 20% of the population.

The researchers also found, however, that intensive, evidence-based intervention can reverse these negative effects.

The findings were published in the February 2022 issue of the Journal of Pediatric Neuropsychology.

For the study, the senior authors, along with their collaborators from University of California, Davis and Universidad Autónoma de Madrid, followed children from a New Haven charter school in grades 1 to 4 over three summers. The three summers together amount to six months of school time—which is about the aggregate time that many school districts have been closed because of COVID-19.

“Our findings provide strong evidence that disruptions in schooling, for example, those implemented to slow the spread of COVID-19, may have a significant detrimental effect on the reading abilities of disadvantaged children,” said co-senior author Dr. Bennett A. Shaywitz, the Charles and Helen Schwab Professor in Dyslexia and Learning Development at Yale School of Medicine and co-founder and co-director of the Yale Center for Dyslexia & Creativity. “Children who received an evidence-based intervention during the school year were better able to maintain their reading scores in contrast to children in a comparison group who did not receive the intervention.”

The researchers measured reading skills in a group of disadvantaged children before and after the summer break. According to their findings, the students fell behind the normative population in their ability to understand written texts, an effect 3 to 4 times greater than earlier studies suggested.

“What surprised us most was that we could prevent the reading loss in the weakest readers by providing a very intense evidence-based reading intervention during the school year, prior to the summer break,” said co-lead author Dr. Sally E. Shaywitz, the Audrey G. Ratner Professor in Learning Development at Yale School of Medicine and co-founder and co-director of the Yale Center for Dyslexia & Creativity. “These weakest readers who received the intervention in fact didn’t decline much in reading over the summer and essentially stayed on track.”

The study’s findings indicate that disruptions in schooling have a significant detrimental effect on the reading abilities of disadvantaged children. Furthermore, those children who were provided with an evidence-based reading intervention were able to maintain their reading scores during the school hiatus.