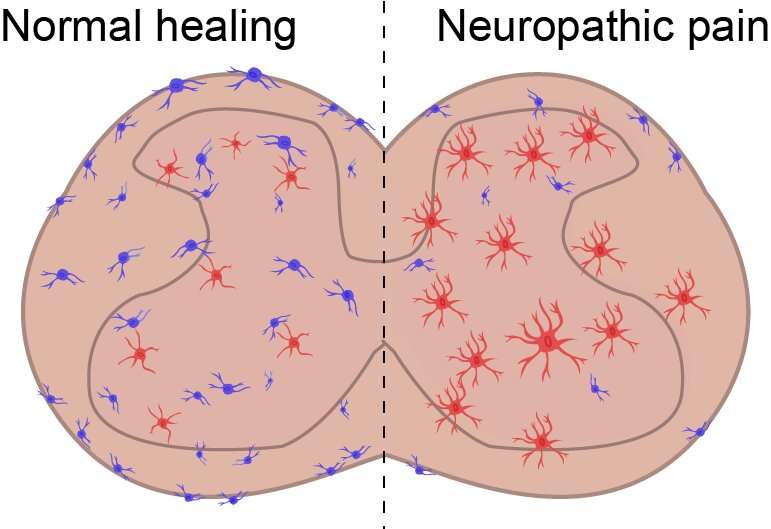 One of the hallmarks of chronic pain is inflammation, and scientists at the UNC School of Medicine have discovered that anti-inflammatory cells called MRC1+ macrophages are dysfunctional in an animal model of neuropathic pain. Returning these cells to their normal state could offer a route to treating debilitating pain caused by nerve damage or a malfunctioning nervous system.

The researchers, who published their work in Neuron, found that stimulating the expression of an anti-inflammatory protein called CD163 reduced signs of neuroinflammation in the spinal cord of mice with neuropathic pain.

“Macrophages are a type of immune cell that are found in the blood and in tissues throughout the body. We found a class of anti-inflammatory macrophages that normally help the body to resolve pain. But neuropathic pain appears to disable these macrophages and prevent them from doing their job,” said senior author Mark Zylka, Ph.D., director of the UNC Neuroscience Center and Kenan Distinguished Professor of Cell Biology and Physiology. “Fortunately they don’t appear to be permanently disabled, as we were able to coax them to ramp up their anti-inflammatory actions and reduce neuropathic pain. We suspect it will be possible to develop new treatments for pain by boosting the activities of these macrophages.”

Roughly one-fifth of the U.S. population has chronic pain, according to the Centers for Disease Control and Prevention. Often the underlying causes are elusive, and patients need pain alleviated so they can function in life. While opioids are great at treating pain in the short term, these drugs can have severe side effects when used for extended periods, such as addiction, respiratory depression, dizziness, nausea, and death due to overdose.

One reason why strong pain relievers work well but can have dramatic side effects has to do with a basic biological fact: pain involves a highly diverse set of cells and current treatments lack cell type specificity. So, any given medication may resolve adverse changes in some cells to alleviate pain, but the medication might exacerbate a particular function in other cells, leading to adverse side effects.

With an emerging technology called single-cell RNA-sequencing, scientists can now interrogate thousands of cells at once to see which cells are altered during chronic pain, and in which ways the cells change.

“Knowing which cells to target allows us to design very specific therapies. Targeted therapies in theory should have fewer adverse side-effects,” said Jesse Niehaus, graduate student in the Zylka lab and first author of the Neuron paper.

To figure out which cells were changing and in what ways, Zylka’s lab performed single-cell RNA-sequencing on the spinal cords of mice with neuropathic pain, a type of chronic pain caused by nerve damage. The spinal cord undergoes many long-term changes that contribute to neuropathic pain.

From those experiments, the researchers found a population of anti-inflammatory cells called MRC1+ macrophages that were dysfunctional.

“This was incredibly interesting because long-term inflammation in the spinal cord is commonly seen in animals with neuropathic pain,” Niehaus said.

With the identity of the cells revealed, Zylka’s lab delivered a gene therapy designed to stimulate the expression of an anti-inflammatory protein called CD163 in MRC1+ macrophages. With this approach, a single treatment reduced spinal cord inflammation and relieved pain-related behavior for up to a month.