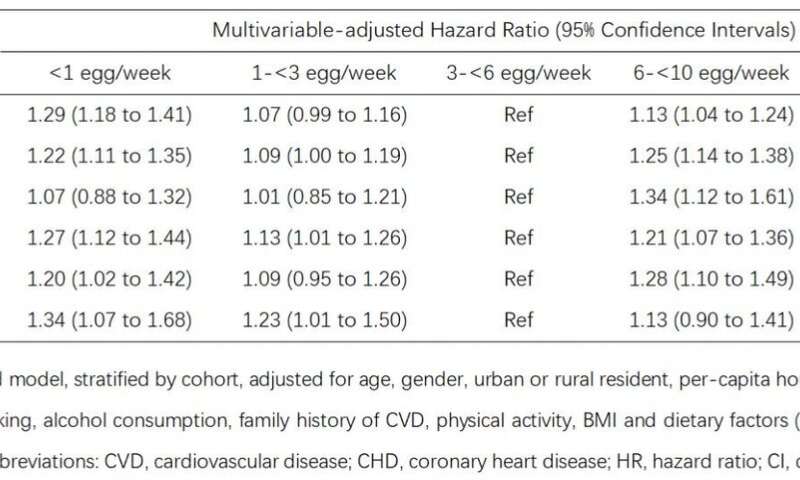 Eggs have been acknowledged as a good source of high-quality proteins and contain bioactive components beneficial for health, while they are also loaded with abundant cholesterol in the yolks, making the public hesitant about consuming whole eggs. Up to now, most studies exploring the association of egg consumption with incident CVD or total death were conducted in high-income countries and findings were inconsistent across populations and CVD subtypes. Accordingly, no consensus has been reached on the recommendation of egg consumption around the world.

In addition, researchers pointed out that the influence of egg consumption seemed to be different across CVD subtypes. Individuals who had higher consumption of eggs were more likely to have increased risk of coronary heart disease (CHD) and ischemic stroke, while the elevated risk of hemorrhagic stroke was only found among those with lower consumption.

The current study was conducted based on the project of Prediction for Atherosclerotic Cardiovascular Disease Risk in China (China-PAR), which was established to estimate the epidemic of CVD and identify the related risk factors in the general Chinese population. A total of 102,136 participants from 15 provinces across China were included, who were all free of CVD, cancer or end-stage renal disease at baseline. During up to 17 years of follow-up, 4848 cases of incident CVD (including 1273 CHD and 2919 stroke), and 5511 total death were identified, with over 90% follow-up rate. 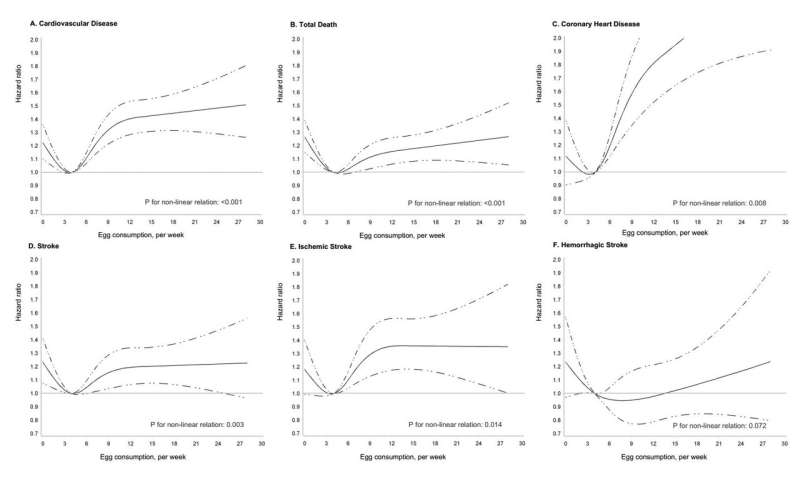 Previous Chinese evidence from the China Kadoorie Biobank (CKB) study indicated that low to moderate intake of eggs (about 5 eggs/week) was significantly associated with lower risk of CVD in comparison with never or rare consumption (about 2 eggs/week). However, lacking participants with consumption of >=1 egg/d limited them to further assess the influence of higher egg consumption. In the China-PAR project, about 25% participants consumed 3-6 eggs/week, and the percentage of participants consuming < 1 egg/week and >=10 eggs/week was 12% and 24%, respectively. Benefiting from the wide range of egg consumption, the present study firstly demonstrated the potential adverse effects of too much egg intake among the Chinese population.