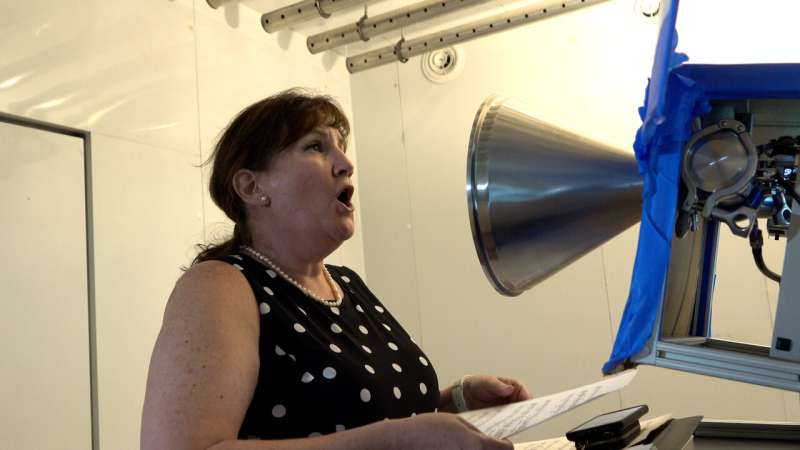 It’s become clear throughout the COVID-19 pandemic that airborne transmission of infectious respiratory particles plays an important role in how the virus spreads. The performing arts—from Broadway to Colorado State University’s University Center for the Arts—took a brutal hit early on, as it was suspected that singing, talking, and playing instruments in packed venues could put both performers and audience members at high risk of exposure.

Those suspicions were borne out in a CSU study that measured respiratory particles produced from people singing or playing instruments. Is singing worse than talking when it comes to how many particles are being emitted? Yes, according to the study. And the louder one talks or sings, the worse the emissions. A person’s age and whether they are male or female also affects their respiratory emissions, with males and adults emitting more airborne particles, on average, than females and minors.

The study was called Reducing Bioaerosol Emission and Exposures in the Performing Arts: A Scientific Roadmap for a Safe Return from COVID-19. Launched early in the pandemic before vaccines were widely available, it was led by John Volckens, professor in the Department of Mechanical Engineering with appointments in the CSU Energy Institute, the Colorado School of Public Health, the School of Biomedical Engineering, and the Department of Environmental and Radiological Health Sciences. His team partnered with Dan Goble, director of the CSU School of Music, Theatre and Dance, to determine the extent to which singers, musicians and actors emit aerosols (tiny airborne particles less than 100 microns in size), and whether those emissions could be quantified.

The collaboration’s first peer-reviewed paper, published this week in Environmental Science and Technology Letters via open access, confirmed what the engineers had suspected about airborne particle emissions that pertain to certain activities. Singing produced 77% more aerosols than talking; adults produced 62% more aerosols than minors; and males produced 34% more aerosols than females. The recent paper only contains results from the study’s singing and talking experiments; results from wind instrument-playing are pending further data analysis and peer review.

Goble and colleagues raised nearly $100,000 in support of the study, including gifts from the United States Institute for Theatre Technology, Conn-Selmer and the Yamaha Corp.

The centerpiece technology of the study was an aerosol testing chamber in Volckens’ Powerhouse Energy Campus lab, only a few of which exist in the U.S. About 100 volunteers ranging in age from 12 to 61 sat or stood in the chamber and sang, talked or played instruments while sophisticated equipment captured and measured the respiratory particles they were producing. They took measurements while subjects were both masked and unmasked.

Among their key findings was that while there were differences between how many particles were emitted by minors (children aged 12-18) vs. adults, or males vs. females, those differences were largely driven by participants’ voice volume and total exhaled carbon dioxide. In other words, a man might produce more particles by talking normally compared with a 12-year-old child; but the child singing or yelling might produce more than or as many as the man.

These observations were important, Volckens said, because they lend credence to the idea of measuring carbon dioxide levels and noise levels in an enclosed space as a means to gauge transmission risk.

“If there were significant differences after accounting for CO2 between males and females and kids, then you’d have to know how many males, females, and minors were in a room to estimate transmission risks,” Volckens said. “Our data suggest that you don’t need to know that if you just measure CO2 and noise levels, because those measures are an equalizer for these demographic differences.”

CO2 and noise level monitoring together, say in an indoor performance venue, could act as a simple, low-cost risk indicator of airborne transmission of disease—and not just COVID, but any airborne disease like the seasonal flu or the common cold, Volckens said.

How results have been implemented

Goble said that working with the CSU engineers helped his team better understand how visual and performing arts could re-implement their programming after being completely shuttered or virtual for many months. Goble and colleagues presented physical distancing, room occupancy caps, room ventilation and masking protocols to the Pandemic Preparedness Team in fall 2020. He and Volckens gave webinars providing preliminary study information to groups like the National Association of Schools of Music who were eager to learn what the CSU researchers were finding out.

“We wanted to put some of that information out as soon as possible so people could make informed decisions based on their situations,” Goble said.

At CSU, the performing arts look a little different but are largely back to full operation after going completely virtual in spring 2020. Their current protocols include things like extra time between classes for performance rooms to undergo sufficient air exchanges between rehearsals, physical distancing of at least 6 feet for voice lessons, and restrictions on occupancy times for venues. The use of masks, the wide availability of vaccines, and CSU’s 90% vaccination rate have changed the game for the performing arts, Goble said, allowing program leaders to implement layered risk mitigation while allowing rehearsals, performances and lessons to take place.