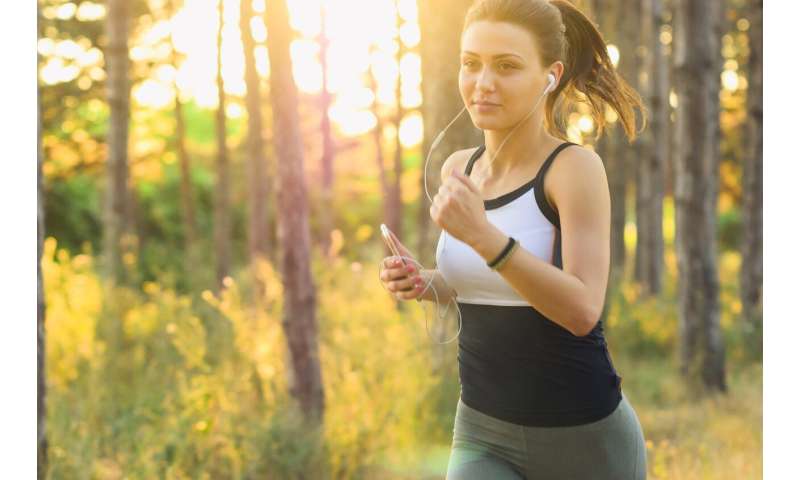 With the start of the new year, gyms are at their busiest and many people are trying to establish a workout routine to improve their health. Getting an edge by making exercise easier and more effective could be the difference between success and guiltily returning to the warm embrace of the couch. What if doing something as simple as listening to a particular type of music could give you that edge?

A new study in Frontiers in Psychology is the first to show that listening to music at a higher tempo reduces the perceived effort involved in exercise and increases its benefits. These effects were greater for endurance exercises, such as walking, than for high-intensity exercises, such as weightlifting. The researchers hope that the findings could help people to increase and improve their exercise habits.

Many people listen to music while exercising and previous studies have documented some of the benefits. For instance, music can distract from fatigue and discomfort and increase participation in exercise. However, “how” we experience music is highly subjective, with cultural factors and personal preferences influencing its effects on individuals. Music is multifaceted with various aspects such as rhythm, lyrics and melody contributing to the experience.

Until now, researchers did not understand the specific properties of music that affect us during exercise, including which types of music are best suited to enhancing certain types of exercise. Understanding these specifics could help to unlock the full potential of music as an exercise enhancer.

The researchers set out to investigate the effect of the tempo of a piece of music on female volunteers performing either an endurance exercise (walking on a treadmill) or a high-intensity exercise (using a leg press).

The volunteers completed exercise sessions in silence, or while listening to pop music at different tempos. The researchers recorded a variety of parameters, including the volunteers’ opinions about the effort required to complete the exercises and their heart rate while exercising, as a higher heart rate would mean that the exercise was more beneficial for physical fitness.

“We found that listening to high-tempo music while exercising resulted in the highest heart rate and lowest perceived exertion compared with not listening to music,” explained Professor Luca P. Ardigò of the University of Verona in Italy. “This means that the exercise seemed like less effort, but it was more beneficial in terms of enhancing physical fitness.”

These effects were more noticeable in volunteers completing the endurance exercise sessions, compared with those performing high-intensity exercises, suggesting that people performing endurance activities such as walking or running may receive the greatest benefit from listening to high-tempo music.

The researchers hope that these results will provide a simple way to improve levels of physical activity. While the current study involved a small group of volunteer subjects, larger studies in the future will be needed to continue exploring the nuances of how music affects our training.

“In the current study, we investigated the effect of music tempo in exercise, but in the future we would also like to study the effects of other music features such as genre, melody, or lyrics, on endurance and high intensity exercise,” said Ardigò.