The first trial participant is an American who was repatriated after being quarantined on the Diamond Princess cruise ship and the study is being conducted at the University of Nebraska Medical Center in Omaha, according to the National Institutes of Health.

He or she is one of 14 ‘high risk’ passengers transferred there – including two who are being treated in special biocontainment units and one transferred from Texas last night – after being evacuated from the cruise ship.

Remdesivir was originally designed to treat Ebola. It performed poorly against that virus, but has shown promise for treating the new coronavirus, including in the US’s patient zero, whose symptoms improved significantly within 24 hours of his first dose. 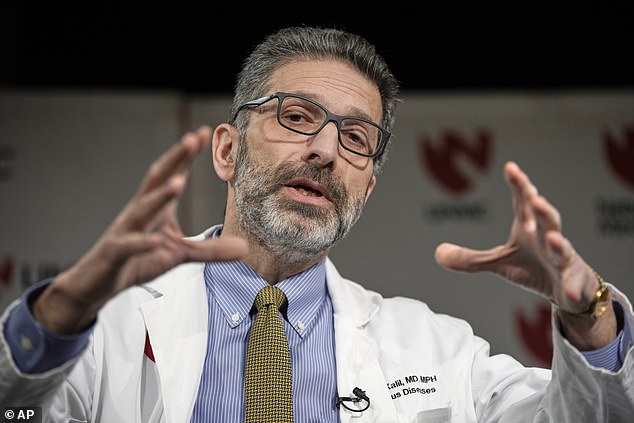 Dr Andrew Kalil, who is overseeing the trial at the University of Nebraska Medical Center , says he expects to see preliminary results on whether or not remdesivir effectively treats coronavirus in a year or less

It’s not the only prospective treatment for the infection that’s killed more than 2,700 people worldwide being tested, but World Health Organization officials said Tuesday that it is the most promising.

Gilead’s drug is one of the first therapeutics in clinical trials to treat COVID-19.

Clinical trials in people are also underway in China, where the majority of cases of the virus, and all but 47 deaths have occurred.

Another pair of antivirals, commonly used to treat HIV are also being tested in humans in China.

Scientists expect they’ll know whether or not the drug combination is safe in a matter of weeks.

Remdesivir produced encouraging results earlier this month when it showed promise for both preventing and treating MERS – another coronavirus – in macaque monkeys.

The drug can help stop the replication of viruses like coronavirus and Ebola alike.

NIH researchers in charge of the macaque study recommended that it move ahead to human trials with the new coronavirus.

Scientists have listened, and are kicking off human trials for remdesivir in Nebraska.

Eventually, doctors aim to recruit about 400 patients in the US and abroad, from some 50 locations worldwide.

The trial will not be open to people who have just mild infections and only people who are hospitalized with the pneumonia as a result of the virus will be eligible. 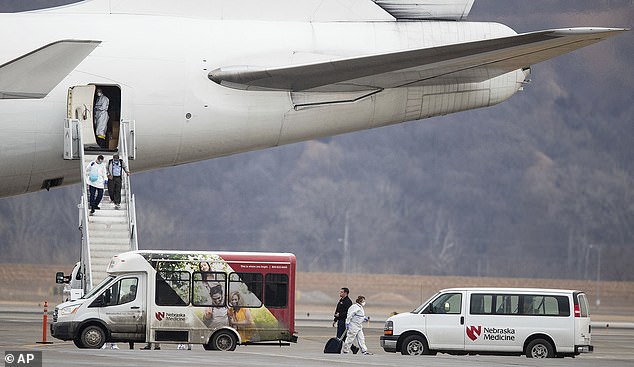 Half of those enrolled in the double-blind experiment will be given remdesivir, half will receive a placebo in 30-minute daily infusions and all patients will receive supportive care.

The first patient, one of those in treatment at the University of Nebraska Medical Center, has already begun the trial, though it’s unclear if they are receiving the drug or a placebo.

Dr Andre Kalil, who is overseeing the clinical trial, said he expects at least preliminary results within a year or even less.

‘In the United States, this is the most rapid kind of trial initiation we’ve seen in history,’ he said.

The trial was designed just a matter of weeks ago, and typically such a trial would take months to get underway.