Virtual reality-style goggles that let doctors ‘see’ inside the body can spare patients with facial tumours from disfiguring paralysis.

About 30 UK patients have already been among the first in the world to benefit from the cutting-edge technology – and thousands more could follow if the procedure is rolled out across the NHS in the next few years.

The goggles, which are fastened via a strap around the surgeon’s head, are being trialled at University College London Hospital, where experts are deploying them as a treatment for parotid tumours. 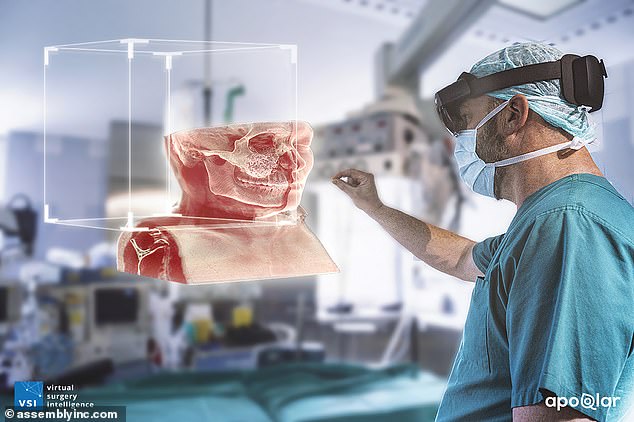 These are abnormal lumps that grow on the parotid glands, which are located in front of the ears and produce saliva.

Parotid tumours are thought to affect about 5,000 Britons every year. The vast majority of tumours – at least 80 per cent – are benign. And although they can grow quickly, they do not spread to other parts of the body.

It’s not clear what causes them. Smoking could be a risk factor and scientists are also investigating whether they can be inherited.

Colours can appear differently, depending on the position of your body.

Scientists have shown that if you lie on your left side and shut your left eye, colours are slightly different in shade compared to if you shut the right eye and keep the left open.

This is because lying on the side causes more blood to rush to the left side of the head, eye and body, improving the quality of signals sent between that eye and brain.

This enhances the image projected from the eye to the brain.

Try it for yourself and see if you notice a difference…

But surgery to remove them is potentially dangerous as the glands are intertwined with the main facial nerve, which controls all the movements in the face.

With conventional surgery, more than a quarter of patients suffer some facial paralysis that leaves them unable to close the eye on the affected side, or move their lower lip to speak, eat or drink properly.

Most regain complete feeling and movement after a few months. But in one in 50 cases, the damage is permanent.

The problem is that as the tumours grow, they displace the normal anatomy, so that the tiny nerve fibres are not necessarily where they should be.

This means surgeons have little or no idea where they are until they cut into the surrounding tissue, increasing the risk of them accidentally damaging or severing the facial nerve.

The new technology, called HoloLens, has been shown to reduce the injury rate from almost a third to as low as seven per cent.

Developed by software giant Microsoft, it works by producing a hologram through the high-tech headset.

The hologram is a 3D ‘real-life’ image that is projected in the line of vision of whoever is wearing the headset, allowing them to move it from side to side, up or down or completely rotate it, using a paired remote controller. 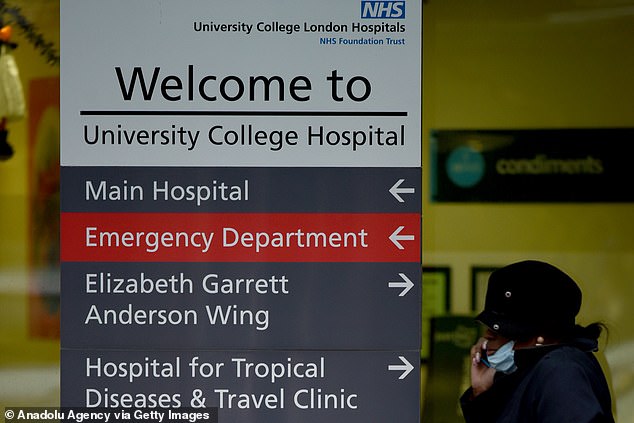 The goggles, which are fastened via a strap around the surgeon’s head, are being trialled at University College London Hospital, where experts are deploying them as a treatment for parotid tumours

Nasa scientists have been using the technology to recreate a digital version of Mars, while some police forces use it to reconstruct crime scenes for further examination.

For facial surgery, the patient first has a detailed MRI scan of the tumour site. The scans are so precise that they can pinpoint the location of nerve fibres not much thicker than a human hair.

A radiologist then uses software to enhance the image, so the path that the facial nerve follows is clearly visible for the surgeon cutting out the tumour.

Weird science: Some people are allergic to water

Roughly 35 people in the world are known to be allergic to water.

Officially called aquagenic urticaria, the condition does not affect sufferers’ ability to drink water but causes unsightly rashes when the skin comes into contact with it.

Having a quick shower, face wash or even just tears running down the face can result in an eruption of itchy, red patches – a bit like a stinging-nettle rash.

Experts remain unsure as to exactly what the immune system views as a threat.

Some suggest it could be an extreme sensitivity to some of the compounds, such as calcium, that naturally occur in water.

This image is uploaded to the hologram goggles, allowing the surgeon to plan the operation in advance.

Software is in development to allow medics to project the tumour image directly on to the body itself during surgery – further improving accuracy.

‘Until now, performing this surgery was like being a blind person trying to find the edge of a cliff in a snowstorm,’ says Professor Mark McGurk, a surgeon who has pioneered use of the technology in head and neck cancer.

‘You wouldn’t find out where things were until you started the operation. Now, with the hologram headset, I can do a dress rehearsal the day before and work out a line of approach before we even start.’

However, the technology is not currently paid for by the NHS. All of the procedures at UCLH have been funded by the Head and Neck Cancer Foundation, a charity Prof McGurk helped establish.

Katherine Williams, a married grandmother-of-two from Worcester, was one of the first people in the world to benefit. The 66-year-old sought help in 2019 after noticing a lump either side of her left ear.

Her GP prescribed antibiotics in case it was due to an ear infection. But when that failed, she was referred for a biopsy, which confirmed she had a parotid tumour.

Although it was slow-growing and non-cancerous, Katherine, a flying instructor, said: ‘I could feel it all the time and was worried that if it got any bigger it would be a much more complicated operation. So I contacted Professor McGurk for a second opinion.’

She had the hologram procedure in December and says: ‘I consider myself very lucky. Without it I probably would have had nerve damage and could possibly have been disfigured.

‘As it is, the scars are minimal and hidden in my hair, so nobody will even know I’ve had anything done. My advice to others is always seek a second opinion.’