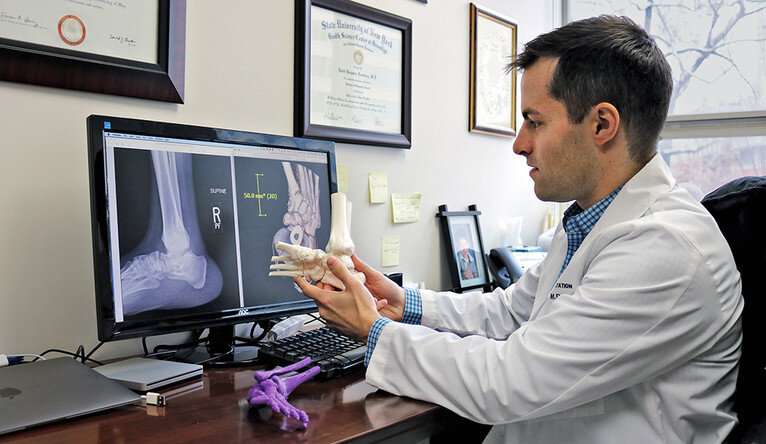 For one recent case, Dr. David Frumberg had to figure out how he was going to fix the left leg of his patient, a 14-year-old girl.

“She has an abnormal connection between these two bones, and she’s missing half of her tibia,” said Frumberg, assistant professor of orthopedics and rehabilitation. “Have you ever had pain on the outside of your foot? It’s awful, and she experiences that with every step.”

It’s a tricky case, and X-rays and CT scans weren’t giving him enough information to go on. To better understand what was going on, Frumberg went to the Center for Engineering Innovation & Design (CEID) to get a 3-D-printed model of the joints. Having the model allowed him to hold the problem in his hand, turn it around, and help him see things he couldn’t before.

“For me, the model helps in so many ways,” he said. “It helps me come up with a plan, it helps me figure out the relationships between all the different complex deformities, and what needs to be repaired and what doesn’t.”

It’s one of several bone models that Frumberg has had printed at the CEID in the last year. They’re especially useful for the more complicated cases and go a long way to reduce a lot of guesswork. And now, when he opens up a patient, there aren’t so many surprises to work out on the fly. “Every time I get a model, it changes my plan 100%,” he said.

That’s because his procedures involve not just a lot of parts, but parts that often don’t look like anything he’s seen in previous cases. Many cases in the field of orthopedics fall under the “routine” category — that is, they require textbook-style knowledge of standard treatments. Frumberg specializes in the other kind.

“I never see the same patient and I rarely do the same operation,” he said. “My work is this: How do I take this uniquely abnormal limb and what can I do that’s best for the patient? It’s that kind of critical thinking that makes it interesting to me.”

His focus on the unusual cases is how he came to take on the case of an 11-year-old girl from the Middle East. Her family moved to the U.S. last year and was steered toward Frumberg because of the complexity of her condition.

“The outside half of her leg doesn’t grow well, and as a result, she has a significant deformity. You can see her tibia, ankle, and foot are all misaligned and the leg is much shorter.”

The first part of the treatment entailed a complicated reconstruction of the foot and ankle. A few months later, he brought her back to lengthen her leg. The first part was like “nine procedures in one,” he said and could take many hours. The 3-D model helped a lot with his planning. “Without the model I had a list of treatment options, but once I held the model in my hand I knew exactly what I was going to do,” Frumberg said.

The way Frumberg discovered the value of the 3-D models is typical of how a lot of things happen at the CEID. He first came to the makerspace looking to use its laser cutter to devise a grid that would better ensure the proper alignment of bones. He took a look around the room and got some new ideas. “There were students there doing the most amazing things.”

He asked about the 3-D printers, and former CEID Fellow Dante Archangeli ’17 brought out some samples made for other doctors and told Frumberg to come by again if he ever had a case that could use one.

“A few weeks later, he came back and said, “I have one for you,'” Archangeli said.

Archangeli then spoke to Sean Lisse, a resident in Radiology, who had been spending a lot of time at the CEID working on his own project. Lisse converted the scans into formats that can be used with the 3-D printers. He then handed them to Archangeli, who did the printing.

Archangeli said the CEID’s printers have helped out a lot of doctors — some for bones, but others have asked for models of neurons and various organs. It can take a few hours to print out the models but only about 15 minutes of prep time. And each model only costs a few dollars. 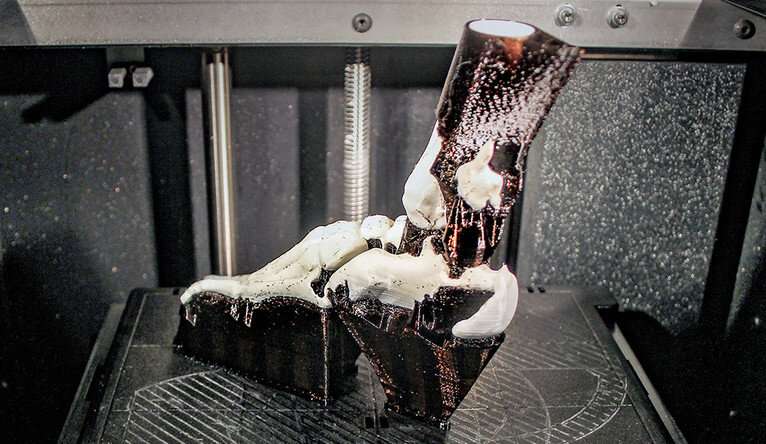 “I think there’s no other technology that would be able to make the things that he wants made,” Archangeli said.

Another CEID regular, Brian Beitler ’19, a Yale medical student who recently graduated with a degree in mechanical engineering and molecular biophysical & biochemistry, has since taken over for Lisse in formatting the scans for the 3-D printer. He has accompanied Frumberg in the operating room, and even there, the 3-D models come in handy. “He’ll often refer to the model in the operating room itself,” he said. “Someone on the outskirts of the room will essentially hold up the model so he can look at it.”

Indeed, Frumberg has become something of an advocate for the 3-D models, talking them up with other orthopedists.

“Now that I’ve had all these cases, I’ve been telling my colleagues that it’s available,” he said. “I’ve gone to the OR in every single room to show everyone. “Look at this! This is what we can do at Yale!” And everyone’s like “Really? Where? How?'”

Unorthodox cases require unorthodox methods — and a lot of thinking and studying. One of the ways Frumberg prepares for surgeries is by staring at images of the limbs he’s working on. Not just in his office — crammed with bone models and frames — but everywhere. He’ll hang X-rays in random places in his house as a way to keep his mind on the problem. But 2-dimensional images have limitations.

“For complicated deformity corrections it is challenging to plan the surgery,” he said. “When I use external fixators, I must plan where to mount them and where to make bone cuts, which tendons and ligaments to reconstruct, which growth centers to modulate — it can get really complicated. And there are a lot of ifs.”

For instance, he brings out a model of the bones of a man in his 30s born with a clubfoot, a condition in which the feet turn inward. He had lived with it until the pain and difficulty of walking became too much. A groundskeeper, he found it increasingly difficult to work. A look at the 2-D images gave Frumberg an idea of what to do. The 3-D model, though, significantly changed his approach.

“Among a few other things, I didn’t fully appreciate how much of his foot was skewed this way up in the air,” he said, pointing to the bone of the big toe, which heads skyward. “I can’t really picture from X-rays exactly what I’m looking at, or even looking at the CT scan. Some people are really good at studying 3-D imaging and figuring out in their head where everything is. For me, though, 3-D printing is the key.”

The models also go a long way in getting his patients on board with whatever approach Frumberg is planning. “It helps parents and the patients themselves understand what I’m proposing and why I am proposing it.”

He showed the printed bones to the groundskeeper with the clubfoot.

“He had no idea what I was talking about. He asked, “What do you mean I have abnormal contact between my fibula and my calcaneus?” And then I showed him the model and he understood: “OK, I get it now.'”

It’s especially helpful with his younger patients. Some of them think the models are really cool and want to keep them. More importantly, it helps them see how a certain procedure may change their body appearance.

“It’s hard enough to tell a kid that he or she has to wear a brace for scoliosis, but imagine how hard it is for a child to hear me say “I’m going to cut your foot open,'” he said. “With the model, though, I can show them, “This is your foot, this is what makes it different — I can correct this, and this is how I’ll do it, and this is what I think it would look like when I’m done’ — then it goes a lot easier.”

Archangeli said he’s heard similar experiences from other doctors who have come to the CEID for assistance.

“For them, they see this stuff all the time in and textbooks and in patients so for them, it’s just another case, but for the patients, this is the first they’ve ever seen this, so definitely having something in front of them that’s physical is probably really helpful,” he said.