Skeletal muscle cells facilitate voluntary movements such as walking, running, and other forms of exercise. They are comprised of thin, tubular cells called muscle or myofibres due to their threadlike appearance. A single muscle is comprised of hundreds to thousands of myofibres each of which is comprised of units of contractile machinery, called sarcomeres.

Sarcomeres contract and lengthen and during exercise; eccentric contraction cause fibers to be forcibly lengthened during contraction can result in overstretching. Physical exercise induces mild musculoskeletal injuries that need rapid and efficient repair to preserve muscle homeostasis.

However, subsequent injury produces reduced damaging effects because of adaptation. This adaptation is in consequence of muscle repair, and several proposed mechanisms have since been unearthed since the discovery of damage to the muscle fiber. 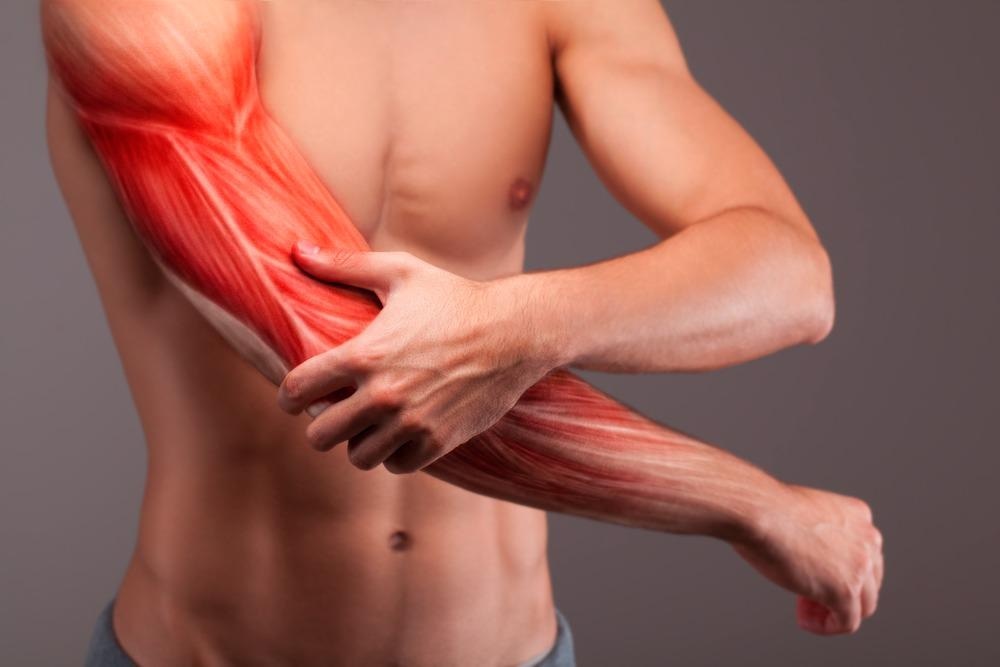 When does muscle regeneration occur?

Muscle regeneration in response to injury typically initiates during the first week after injury, peaking at two weeks, and gradually slowing between three and four weeks.

The role of satellite cells in muscle regeneration

Resident muscle stem cells, also known as satellite cells, are located between the plasmalemma of myofiber on the basal lamina. These specialized cells possess a potential for muscle regeneration following injury. After muscles are injured, satellite cells become rapidly activated from a resting or quiescent state.

They subsequently differentiate to assume myoblasts and proliferate and fuse or with existing myofibers (forming myotubes) to regenerate muscle. A small population of these activated cells then revert to the quiescent state where they can self-renew and ensure the stem cell pool is maintained.

How to Reduce Muscle Soreness After Training

In adult muscle cells, quiescent satellite cells express the box protein 7 (PAX7), on the activated cells upregulate myogenic regulatory factor MYOD and proliferate. When cells undergo differentiation into myocytes, most satellite cells downregulate PAX7 and maintain the expression of MYOD. This allows the cells to initiate the process of myogenesis via upregulating the protein myogenin.

In myoD-knockout mice, there is a reduced regeneration ability following muscle injury as a consequence of impaired population expansion and differentiation; this indicates that MYOD plays an essential role in activating satellite cells during the initial phase of regeneration.

How the activation of satellite cells is regulated has long been considered a fundamental question in muscle biology. Towards the end of the 20th century, researchers determined that muscle extracts are capable of activating and proliferating cultured muscle cells; this subsequently prompted the exploration of factors in these extracts from intact or crushed muscle tissues that contribute to muscle regeneration.

As a result, several growth factors that promote the activation and proliferation of satellite cells were unearthed from muscle tissues. Growth factors modulate satellite cell activity and are secreted from several cells located in the institutional spaces. These include macrophages, mesenchymal progenitors, and fibroblasts.

In a recent study, researchers sought to investigate the regulation of satellite cell activation using isolated individual myofibres in a floating culture model. In doing so, researchers could view myofibre extracts and quiescent satellite cells associated with myofibres in the absence of interfering effects of the interstitial cells.

This revealed that damaged yofiber-derived factors (DMDFs) are capable of stimulating satellite cells and cause them to transition from the G0 (quiescent) to the G1 stage of the cell cycle. The group also identified metabolic enzymes (such as GAPDH) that function as DMDFs to activate satellite cells ex vivo and stimulate the expansion of satellite cells during muscle regeneration in vivo.

Taken together, this group demonstrated that damaged myofibers directly signal to residents’ stem cells following muscle injury to expedite the first step of tissue regeneration. In addition, DMDFs function as biomarkers for muscle damage as well as initial trigger proteins that are involved in the activation of satellite cells.

More recently than this, researchers have discovered a previously unidentified repair mechanism that is triggered after muscle injury. Researchers demonstrated a repair process that is independent of muscle stem cells (cell-autonomous) after using mouse models.

In response to injury, mouse muscle was found to trigger a signaling cascade that results in the attraction of my nuclei to the damaged site as the consequence of microtubule and dynein assembly. These movements were found to accelerate the repair of the sarcomere and cause local delivery of messenger RNA for cellular reconstruction.

Researchers described this as a cell-autonomous protective mechanism, a form of myofibre self-repair, which represents an alternative model for understanding how the morphology of muscle is restored in health and disease.

This finding challenges the skeletal muscle and homeostasis and regeneration dogma which is widely assumed to be mediated by satellite cells. The work opposes this stem cell-centric view, demonstrating that muscle integrity is also maintained through an alternative myofibre autonomous repair mechanism. At the heart of this mechanism is a nuclear migration for local delivery of messenger RNA is required for the production of protein and repair of damaged sarcomeres.