Eye allergies can be frequent and troublesome. The eyelids, which are the mucous membrane covering the eyes (conjunctiva), are the most frequent site of inflammation due to allergy. However, allergies can also affect the front of the eye (cornea), either in conjunction with allergic rhinitis or alone. In fact, about 40 – 60% of individuals with allergies will experience some kind of eye-related symptom. 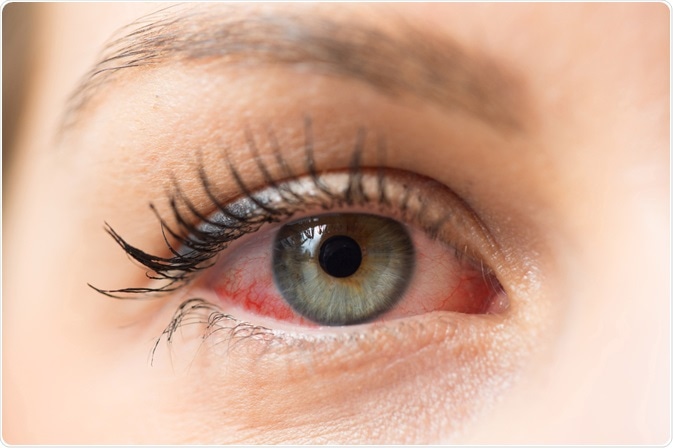 Eye allergies range from the most common and less severe forms such as hay-fever related, to fully autoimmune and chronic forms of eye disorders.

This is the most common form of eye allergy, and is immunoglobulin-E (IgE) mediated. It occurs as a consequence of hypersensitivity to airborne pollutants, such as pollen grains, animal dander, mites, and mold spores. Many people suffering from atopic conjunctivitis also suffer from allergic rhinitis.

Hay fever is an acute (short-term) illness caused by a hypersensitivity to pollen. It is characterized by peaks and troughs, but becomes persistent during the allergy-inducing pollen/hay fever season (usually summer time). It manifests as itching, redness, and swelling of the eyelids, with a burning sensation, chemosis (i.e. swelling of the conjunctiva), and excessive tear and mucus production.

Seasonal allergic conjunctivitis can be treated with antihistamines, anti-inflammatory drugs and mast cell inhibitors, such as cromoglycate. Immunotherapy is sometimes used in severe cases. The aim of treatment is to completely eradicate the hypersensitivity reaction. This is attempted in order to prevent chronic inflammation which can cause long-term damage, as well as treating other allergic manifestations, such as rhinitis.

This condition mostly affects middle-aged people. It is linked to dry eye symptoms. Here the eye remains red and swollen and the patient feels a burning sensation of various degrees of severity, along with constant low-level pruritus (i.e. itching) of the eye.

Treatment for perennial allergic conjunctivitis should be prompt, intensive and prolonged if necessary. In both types, the affected individuals may have prominent dark circles under their eyes. These marks are called ‘allergy shiners’. If this occurs, patients may not be able to bright light.

Vernal keratoconjunctivitis is a chronic, more serious and far less frequent eye allergy disorder, and may have corneal complications. This type of eye allergy is seen mostly in warmer climates. This condition can affect children or young adults. In about 50% of patients, other allergies are also present. It is seasonal in incidence, usually from the start of spring to autumn.

In very hot climates, it may persist throughout the year. Affected people feel as if there is something in their eyes (i.e. a foreign body sensation), along with severe itching. Other symptoms include photophobia (dislike of bright lights) and the presence of thick mucus, with cysts (eosinophil granulomas) forming in the upper eyelid.

It is thought to be a hypersensitivity reaction to airborne antigens/allergens. Both genetic and environmental factors are implicated in this condition. The incidence declines sharply over the age of 15 years. It is more frequent in males up to this age and in almost all patients it is bilateral (affects both eyes). 3 out of 4patients also have a history of eczema or asthma.

Vernal keratoconjunctivitis is characterized by a very noticeable infiltration of inflammatory cells, which sets it apart from seasonal or acute forms of eye allergy. Both T-helper (Th) cells type 1 and 2 are abundant along with their interleukin (IL) cytokines.

In this condition, TH1 cells are overexpressed, especially in the stage of acute inflammation. In response to the massive release of chemical mediators, eosinophil (immune cell) infiltration and activation occurs, resulting in the elevation of eosinophil-derived epithelial toxins. This causes corneal damage in many cases. This can lead to the formation of corneal plaques and ulcers.

An overall imbalance between stimulatory and inhibitory activity leads to prolonged inflammation. Treatment is with antihistamines and mast cell inhibitors. Cyclosporine A and corticosteroids are used in severe disease.

Unlike vernal keratoconjunctivitis, atopic keratoconjunctivitis forms part of an abnormally sensitive immune reaction, often accompanied by eczema, allergic rhinitis or asthma. It occurs over a wide level of severity and may threaten eyesight, if not treated.

Symptoms include burning, severe itching and redness of the eyes, with thick mucus, which may gum together the eyelids after sleep. Eczematous blepharitis (eye lid inflammation with eczema on the eyelids) is present, often with Staphylococcus aureus secondary infection.

In such cases, the eyelashes often fall out. Furthermore, corneal damage is likely if left untreated. Blepharitis is treated with the calcineurin inhibitors tacrolimus or pimecrolimus until it resolves completely. Corticosteroids and, in some cases, cyclosporine A, is required to treat the conjunctivitis.

Contact allergic hypersensitivity is often not considered to be a real allergy per se, but is caused by repeated micro-traumas of the cornea. Contact lenses may induce allergy by themselves or because of antigenic tear protein-lens combinations. Symptoms include redness, itching and mucus production, with significant discomfort on wearing the lens.

This is another condition that can be caused by the use of contact lenses. Large papules (abnormal inflammd skin tissue) form on the inner conjunctiva of the upper eyelid. The eyes are puffy, itchy and teary. There is often discomfort upon wearing contact lenses and enhanced mucus production. A foreign body sensation is present, while vision may also be blurred.

Contact blepharoconjuctivitis is caused by immune and toxic damage to the surface of the eyes, due to contact with various substances. This condition is a T-cell mediated hypersensitivity reaction, which is caused by the binding of haptens (i.e. small molecules that can elicit antibody production) to tissue proteins. The haptens may be natural substances, such as natural resin in cosmetics, or nickel and cobalt in mascara, and components of eye medications.

The offending substance may be an antibiotic, glaucoma medication, antihistamines or mydriatics (i.e. agents that induce pupil dilation). Sometimes even the preservatives used in these topical medications may cause allergy or inflammation. Treatment can be achieved by preservative-free artificial tears and antihistamines as required.

Delayed allergies can be caused by airborne pollutants, chemicals, such as those vaporized from rubber or composites, or some plants in the hot humid conditions of a greenhouse. These types of allergies are managed by avoiding the offending chemical and by treating with corticosteroids, tacrolimus or pimecrolimus.

Osman is a Neuroscience PhD Research Student at the University of Sheffield studying the impact of cardiovascular disease and Alzheimer's disease on neurovascular coupling using pre-clinical models and neuroimaging techniques.