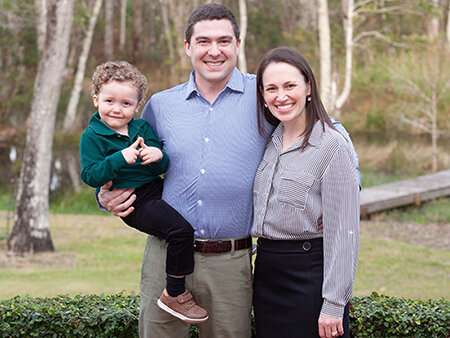 It was a pretty simple e-mail. Just a couple of lines. “It looks like low-dose ketamine is an up-regulator for ADNP. Do you think this makes sense for ADNP patients?”

Matt Might sent that e-mail to Matt Davis on Feb. 18, 2019. Might is the director of the Hugh Kaul Precision Medicine Institute at the University of Alabama at Birmingham School of Medicine. Davis is chief resident in the Department of Neurosurgery at UAB and the father of Benjamin, a child with a developmental delay caused by a variant in the ADNP gene.

And that e-mail was the first step toward a just-launched clinical trial that may make a world of difference for children like Benjamin.

Variants in the ADNP gene are thought to be one of the single largest genetic causes of autism and neurodevelopmental disorders. Children born with ADNP syndrome have one healthy copy of the ADNP gene and one broken copy. The healthy copy produces the ADNP protein, which is essential for proper neurologic development, while the broken copy does not. As a result, the child does not get enough ADNP protein for normal development.

Benjamin’s a good example. He’s three now and was diagnosed just before he turned one. His hearing was affected, followed by slowed speech development. He has some fine motor skill delays, and other developmental issues.

“Through all that, he’s a happy, active three year old,” said Davis. “But as a physician, I wanted to do all I could to find a way to treat or reverse this condition.”

Enter Matt Might. Might is a computer scientist by training who made himself an expert in precision medicine following the birth of his son Bertrand. Bertrand has a rare genetic condition—so rare that it had not been previously identified. Bertrand is, in effect, patient number one for a condition called NGLY1 deficiency.

Might dove headlong into the study of genetics and precision medicine, blended with his computer skills, to find a way to treat his son. His journey led him to a role with the Obama White House Precision Medicine Initiative and then as inaugural director of UAB’s Precision Medicine Institute in 2017, setting the stage for his e-mail to Davis about a potential treatment for ADNP.

“We’ve developed an artificial intelligence tool we call mediKanren, with funding from the National Center for Advancing Translational Sciences,” said Might. “It has read all of the medical literature and uses AI reasoning to make deductions. I knew about Benjamin, and when we received a second request for assistance from a family with ADNP, we were able to load enough information into mediKanren to get started. It returned one major result. Ketamine.”

Ketamine has been approved for use in the United States since 1970. It is used in anesthesia and pain management, and recently as a treatment for depression. It has some limited use in treating asthma and seizures.

“MediKanren sorted through the questions we’d asked of it and searched the literature,” Might said. “Ketamine was the only practical solution that it found. I sent Davis that e-mail and he took it from there.”

“I looked at the scientific studies that mediKanren found,” said Davis. “In several studies using animal models, researchers reported that ketamine appeared to boost ADNP production in brain cells. Since kids with this condition are only getting half of the ADNP protein that they should be getting, boosting production of the healthy gene could make a profound difference.”

Enter Sandra Sermone. Her son Tony was the first patient diagnosed in the United States with ADNP syndrome. Now 12, he was diagnosed just a few months after Bertrand was identified as the first patient with NGLY1. That shared experience connected Might and Sermone. Inspired, she launched the ADNP Kids Research Foundation. She now has a registry of 250 children diagnosed with the condition, virtually all those in the world identified so far.

“Matt Davis joined with us after Benjamin was diagnosed and shared my interest in repurposed drugs,” said Sermone. “He’s now the chair of our medical and scientific committee. He told me about the potential ketamine treatment that Matt Might had discovered using AI and we were off to the races. We began validating the information and spent months pulling publications, researching and contacting other scientists. We investigated, drafted ideas and collected clinical data and started preparing to file for IP and to present to our medical research team.”

Sermone then turned to the Seaver Autism Center for Research and Treatment at Mount Sinai in the Icahn School of Medicine in New York, where researchers are conducting the largest study of ADNP syndrome to date. She presented the case for ketamine to center director Joseph Buxbaum, Ph.D., and investigator Alex Kolevzon, M.D., who were intrigued by its potential. After internal investigation, they began the process of initiating a clinical trial and gaining clearance from the Federal Drug Administration to proceed earlier this year.

“The foundation is funding the trial, and our study contact registry provides the study subjects,” Sermone said. “Since ketamine is an already approved drug, we can move ahead quickly to find out if, or hopefully how well, it works. This means we could have a drug available years before a non-repurposed drug. For our children, time is brain, so the faster we can find a treatment, the faster we can hopefully stop some of the negative effects of the disorder.”

Sermone and Davis say the trial should begin enrolling patients this spring.

“This type of re-purposed drug will most likely cost millions of dollars less to develop as the safety studies have already been done,” Sermone said. “The entire phenomenon of re-purposed drugs are nothing short of a miracle for rare diseases like ours with a small patient population that big pharma has no interest in helping.”

“We have high hopes, tempered with caution,” Davis said. “If it works, it could reverse the condition in very young children whose brains are still adaptable enough to overcome the deficits caused by low levels of the protein. It could also provide some benefit for older children, even if it can’t achieve a complete reversal of the effects. That would be a remarkable victory.”

Might believes this is the first time that an artificial intelligence tool has directly led to a clinical trial.

“This is the first time someone has massed enough evidence starting with our recommendations to go to the FDA to get permission to do a study,” Might said. “We’ve always dreamed of the time when someone, such as a foundation or support group, took recommendations forward and did the hard work that led to a patient trial with the potential to really change lives.”

Sermone says that now armed with the ketamine hypothesis delivered by Might and Davis, and with a willing research partner in Mt. Sinai, they only lack two things. More funding and more patients.

“We could be on the verge of an incredible breakthrough for this condition,” Sermone said.