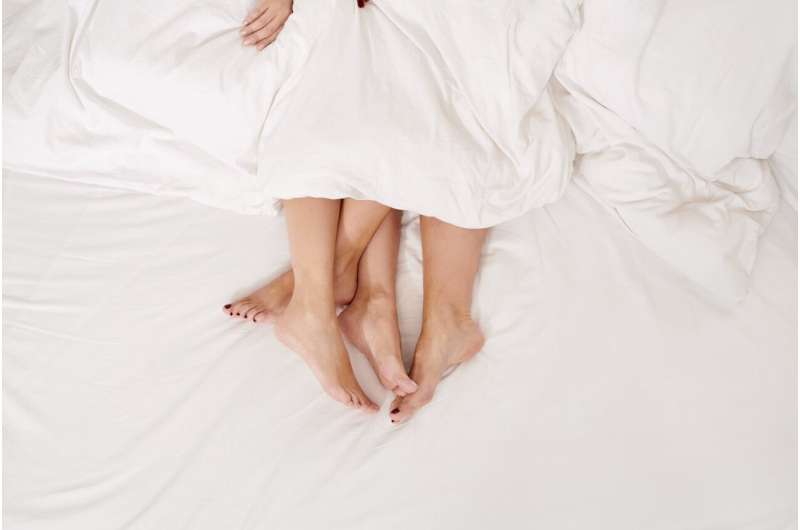 What motivates people in long-term relationships to have sex and how do those motives affect the emotions they experience during sex?

Noémie Beaulieu, a doctoral student in the Department of Psychology at the University of Montreal, and her fellow researchers wanted to find out. They have analyzed the question through the lens of attachment theory.

“Attachment theory postulates that three behavioral systems are essential to an optimal couple relationship: attachment, caregiving and sex,” she explained.

Construction of the attachment system starts at the beginning of life. Children gradually develop beliefs about themselves and others based on their interactions with their main attachment figures, the people who take care of them.

“Anyone may experience attachment insecurity to varying degrees under certain circumstances,” said Beaulieu. “However, in some people, the insecurity is more pronounced and leads to significant relationship and sexual problems.”

Attachment insecurity basically takes two forms: attachment avoidance, which manifests in discomfort with vulnerability and difficulty opening up to others, and attachment anxiety, which is associated with doubts about one’s self-worth and fear of rejection.

To investigate how these two dimensions of attachment insecurity relate to sexual well-being, Beaulieu recruited 149 couples who had been together for an average of nine years.

After completing an initial questionnaire to measure their level of attachment insecurity, the 298 subjects filled out a brief online diary every night for 21 consecutive days. They reported their activities of the day, their interactions with their partner, their sexual relations and, if applicable, the positive and negative emotions they felt during sex.

In all, the research team collected data from 1,678 diary entries.

Happy with their relationships and quite sexually active

To Beaulieu’s surprise, the majority of respondents said they were very happy with their relationships, had sex often and were very satisfied sexually.

“Most of the couples had been living together for at least seven years and they reported having sex at least once or twice a week,” she said. “That was unexpected because it isn’t what we generally see in long-term couples. When things aren’t going so well, sex is significantly less frequent, almost non-existent in some cases.”

Two patterns emerged in the association between attachment insecurity and sexual motives.

Avoidant individuals were less motivated by a desire to take care of or express love for their partner. “They are more likely to feel negative emotions during sex, such as boredom or frustration, but their partner is not,” said Beaulieu.

One partner’s distraction detracts from the other’s pleasure

Among couples in which one partner displayed attachment anxiety, both partners were more likely to experience negative emotions in bed. People with attachment anxiety seek reassurance of their partner’s love, Beaulieu explained.

“In our study, these subjects were more likely to have sex in order to feel loved and close to their partners, suggesting that they use sex as evidence of their partner’s love,” she noted.

And during sex, individuals with attachment anxiety are more likely to experience negative emotions, such as worrying about their performance.

“This can lead their partner to feel less connection and to experience more negative emotions on their side,” said Beaulieu. “So, paradoxically, by trying too hard to assuage their insecurity during sex, people with attachment anxiety fail to satisfy their need to feel closeness to their partner.”

However, attachment anxiety doesn’t always have a negative impact in bed.

“People with higher anxiety also tended to use sex as a way to take care of their partner, leading to more positive emotional experiences for both partners during sex,” Beaulieu said. “It turns out that people with attachment anxiety are not always wrapped up in their fears, and their need for reassurance of their partner’s love isn’t always what motivates them to have sex.”

This study is the first to look at all three systems in attachment theory to explain sexual well-being in long-term couples.

While the data did not make it possible to link individuals’ specific motives and daily emotions, the findings make a contribution to the scientific literature by pointing towards patterns in the way insecure attachment plays out in sexual relations.