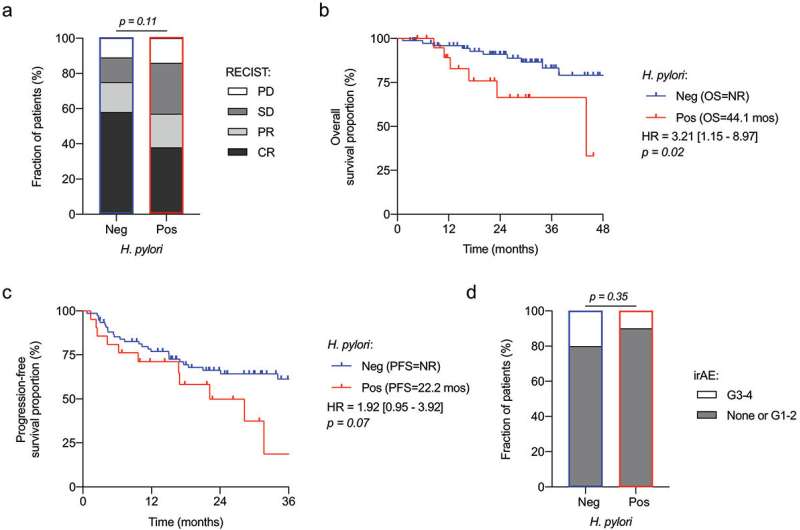 Helicobacter pylori is a bacterium that colonizes the stomach lining and is found in more than half of the global population, making it one of the most widespread bacterial infections in the world.

Most people with an H. pylori infection have no symptoms, but it can result in gastric ulcers and even stomach cancer.

A new Canadian study has found that seropositivity for the bacteria—meaning a blood test has confirmed the presence of antibodies against a previous H. pylori infection—may decrease the response to immunotherapy in people with metastatic melanoma, an advanced skin cancer.

The work is published in the journal OncoImmunology.

Routy and and his team studied nearly 100 patients with advanced melanoma who were treated with immunotherapy, focusing on the effect of the billions of gut-dwelling bacteria on the immune system. They found that patients who tested positive for H. pylori tended to respond more poorly to immunotherapy than patients who were negative, and had significantly shorter overall survival rates.

The study subjects all received immune checkpoint inhibitors (ICI), a form of immunotherapy that is currently at the forefront of treatment therapies for melanoma patients. ICI specifically stimulate the immune system to target cancer cells.

Routy’s recent work has led researchers to take the microbiome into account in cancer research and treatments. Several studies to improve the efficacy of ICI by modifying intestinal microbiota—such as through fecal transplantation—are in the works.

“After all, H. pylori is found in the lining of the stomach, and it is present in over 50 percent of the world’s population,” she said. “Our study suggests that H. pylori, in addition to affecting the stomach, can potentially affect systemic immune response, notably by modifying the polarization of T lymphocytes. This is further evidence that microbiota play a role in the development of cancers, and not just intestinal cancers.”

The next steps, according to Tonneau, are to corroborate these findings in broader prospective studies and to develop new strategies to eradicate H. pylori in patients undergoing immuno-oncological treatments.