Banned chemical once used in toys, clothes and food packets could damage fertility by breaking the DNA of eggs and sperm, finds study on worms

A banned chemical once used in toys, clothes, food packaging and cosmetics may lead to fertility problems, according to a study on worms.

Past studies have claimed DEHP may make both men and women less fertile but the way it could do this has not been well understood.

A study on roundworms revealed that it increased the risk of DNA strands snapping while the body is trying to make sperm or eggs.

It also made them less able to repair broken DNA and led to defects in the chromosomes, which then caused genetic problems which stopped sperm and eggs growing properly and made embryos less able to develop.

Scientists not involved with the research said there was no proof the same problems would happen in humans and older research had suggested they would not. 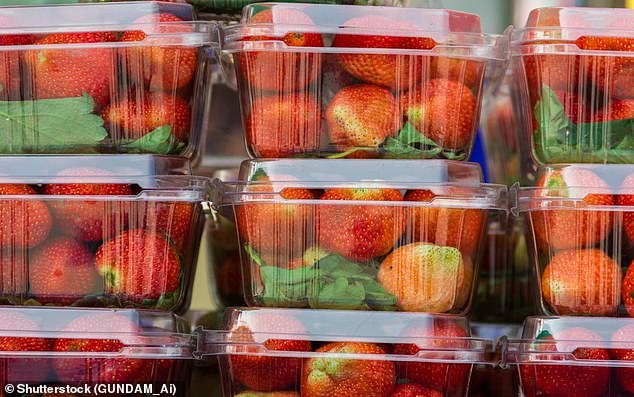 The chemical diethylhexyl pthalate (DEHP) used to be used to make plastics until the EU banned it in 2015, although it is still allowed in new items made of recycled PVC as well as existing in the environment in items made before the ban or in countries where it’s still legal (stock image)

A team at Harvard University in Boston, Massachusetts, did the research by exposing the creatures to DEHP in a lab.

DEHP was used for building, car manufacturing and producing food packets, as well as medical devices and electrical cables.

Because DEHP was classed as a ‘reproductive toxicant’ – meaning it could damage fertility – it was banned under European law in 2015.

But EU members voted in the following year to allow it to continue to be used in the production of recycled PVC.

The move means it is still used in new items as well as existing in the environment in items made before the ban or in countries where it’s still legal.

In their study, the researchers did experiments to see how the chemical affected a species of worm called Caenorhabditis elegans (C. elegans).

They used amounts of DEHP which they said were ‘within the range detected in the human population’ – the chemical has been detected in people’s urine.

Although the worms are tiny and only grow to about 1mm long, their genes are very similar to humans’ so are useful for DNA research.

The study found that when worms were exposed to DEHP their DNA was more likely to break and less likely to be able to repair itself.

The genetic defects which occurred as a result of this meant embryos were less able to grow and the worms were less fertile.

WHAT IS REPRODUCTIVE TOXICITY?

Reproductive toxicity is when a chemical is known to have damaging effects on someone’s reproductive system.

This may be through causing damage to someone’s reproductive organs, such as their genitals or sperm or eggs, by disrupting their hormones, or by damaging DNA.

If a chemical can be seen to make someone more likely to be infertile, or to damage the cells the genetics which are passed on to a child, it can be considered toxic to reproduction.

Well-known toxic chemicals include lead, which can damage the brain and nervous system of a foetus and, in non-pregnant women, cause irregular menstrual cycles or bring on early menopause.

Thalidomide, a chemical once used in a morning sickness pill, is also toxic and was found to cause limb deformities in babies.

A chemical called bisphenol A (BPA), which is widely used in plastic bottles, is also reported to disrupt hormones and potentially reduce male fertility if it gets into the body.

‘[DEHP affects chromosomes] in part by altering chromatin [genetic material] during the production of eggs and sperm,’ said Dr Mónica Colaiácovo, who led the research.

‘Our studies link this alteration to increased levels of DNA double-strand breaks and impaired ability to properly repair these breaks.

‘This underscores the importance of identifying better alternatives for replacing DEHP.’

The researchers said other studies had shown ‘doses relevant to human exposure’ had shown the chemical could damage fertility in mice.

Dr Oliver Jones, from RMIT University in Melbourne, was not involved with the study but said: ‘The work is based entirely on the Caenorhabditis elegans roundworm not humans.

‘While Caenorhabditis elegans is an enormously useful model for biological research, it is not a mini human and it should not be treated as such.

‘Secondly, in this study the worms were continuously exposed to DEHP for their entire life – from eggs until adulthood.

‘This is not the same type exposure as humans get to this chemical (which has been around for a long time).

‘As with any chemical is not really a question of if something is toxic or not (everything is toxic at a sufficient dose, even water) but whether it is toxic at the level to which we are exposed. I think the jury is still out on this for DEHP.’

The University of Edinburgh’s Dr Rod Mitchell said: ‘Caution should be used when translating these results into humans.

And his colleague, Professor Richard Sharpe, added: ‘It is unclear if these findings are translatable to humans, but as germ cells (eggs) are the source of the next generation, we should be especially cautious of any exposure that has the potential to impact germ cells.’

Harvard’s Dr Colaiácovo said she would continue to research the effects of other phtalates – similar chemicals, which are also used in cosmetics – on fertility.

The research was published in the journal PLOS Genetics.