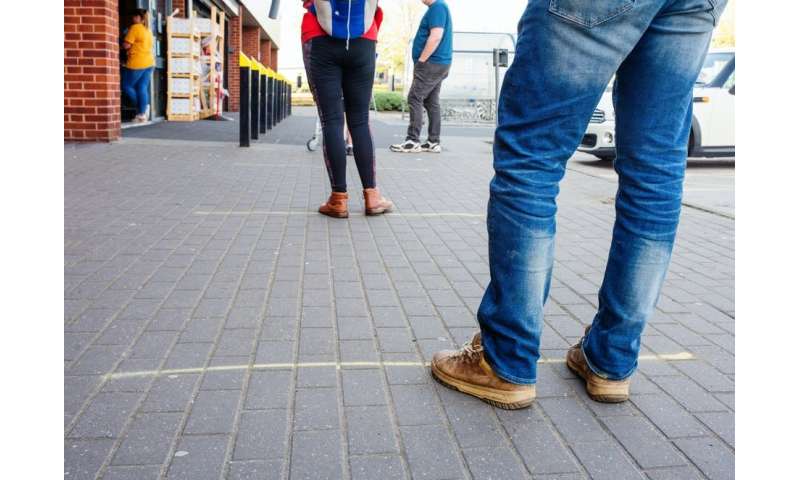 In order to slow the spread of COVID-19, many countries around the world have implemented protective strategies. These include quarantine and social distancing, school closures, and closing restaurants and other public places. Governments have also advised people to take greater measures to protect themselves from contracting the disease, including washing hands and wearing face masks.

But emerging evidence from researchers in Japan suggests that the current pandemic could have an impact on seasonal influenza transmission—and that we could expect to see overall lower flu rates this year. But just how plausible is this and why might this be the case? An overview of the current evidence on certain aspects of flu transmission may provide some insight.

The pandemic has prompted health authorities to emphasize the importance of hand washing, sanitizing and social distancing. When implemented correctly, these simple public health measures could work well in limiting the spread of respiratory illnesses such as the flu.

Like COVID-19, flu is transmitted through droplets of fluid from the nose or mouth of someone who is sick. Over time, the virus is transferred to hands and other surfaces. Hand washing with warm water and soap works to get rid of these droplets on our hands, destroying the virus. Sanitising works by inactivating the virus on contaminated hands or surfaces.

Prior to the pandemic, concerns about improper hand hygiene were commonplace. Research from a UK-wide study suggested hand washing was something people were not particularly good at. The study found only 32% of men and 64% of women washed their hands after using a public loo.

By contrast, emerging evidence from a recent survey conducted in March 2020, shows 83% of people surveyed now wash their hands more regularly. Although it’s not clear if every one washed for the recommended 20 seconds, if this number is representative of the wider UK population, it’s possible this could have an effect on the decreasing flu transmission.

Certain groups of the population are more likely to be affected by infections than others. Sometimes this occurs for unknown reasons, and sometimes it is caused by other underlying factors (including health conditions, such as diabetes or heart disease) that make people more susceptible to infections.

For flu, school children have been identified as a susceptible subgroup, and they appear to have a high rate of disease every outbreak. This is in part due to the lower immunity of children and ample contact opportunities for transmission that arise within schools.

With country-wide school closures in place in most countries to slow the spread of the coronavirus, many children are currently at home. It’s plausible this could limit the transmission of flu to a certain degree.

Another major factor that impacts flu transmission is how close people’s contact with an infected person is. One study showed someone with flu could spread infected droplets to a distance of up to 1.8 meters. This could happen through coughing, sneezing or talking.

After COVID-19 began to spread, health authorities called for the adoption of social distancing. Restrictions on mass gatherings were enforced, only essential travel was advised, and most offices adopted remote working. People were also asked to stay around 2 meters away from anyone outside their household.

These guidelines could reduce disease transmission on a large scale, and may also limit influenza transmission based on what we know about how far flu infected droplets can travel.

What do the numbers actually say?

While these connections make sense, what’s still not clear is the extent to which we can really expect to see a reduction in flu rates.

Measuring who is infected can be challenging. The symptoms of flu can be similar to symptoms caused by other infections. It’s also worth noting that only patients who go to a healthcare facility with flu symptoms are counted.

That being said, in the second week of February 2020, Japan reported a 60% reduction in flu cases compared to the same week in 2019. Weekly reports from Public Health England and the European Centre for Disease Control and Prevention also report decreasing influenza activity during the same period in comparison to previous years.

However, if either of these countries are carrying out limited flu testing due to stretched healthcare facilities during the pandemic, these numbers may not reflect the true reality. Likewise, these numbers may be different to the reality, as people may not be going to the doctor or hospitals for fear of catching COVID-19. Estimates should therefore be interpreted cautiously.

It’s currently unknown if the supposed reduction in transmission will result in fewer complications and deaths because of influenza. But it’s critical that we try to find out because complicated cases of flu put more burden on healthcare systems, and this could have implications for our efforts to deal with COVID-19. As a result, we need more data and studies on the issue.