Cases of the virus, which causes Aids if left untreated, have been tumbling over the last decade.

Just 2,023 people in England were diagnosed in 2021, according to the most up-to-date statistics. This was down by a third on the year before the pandemic.

But health bosses claimed the number would have been even lower, had Covid not disrupted efforts to end transmission. 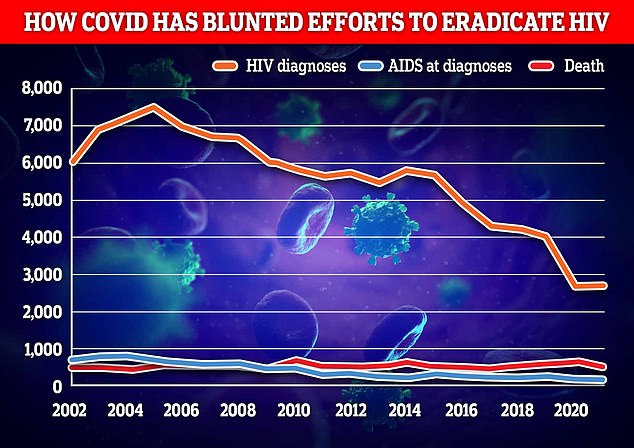 Officials fear the disruption of Covid could have blunted efforts to reduce new HIV diagnoses, with just 2,023 people in England were diagnosed in 2021 (orange line). Health bosses claim the number would have been even lower if not for the pandemic 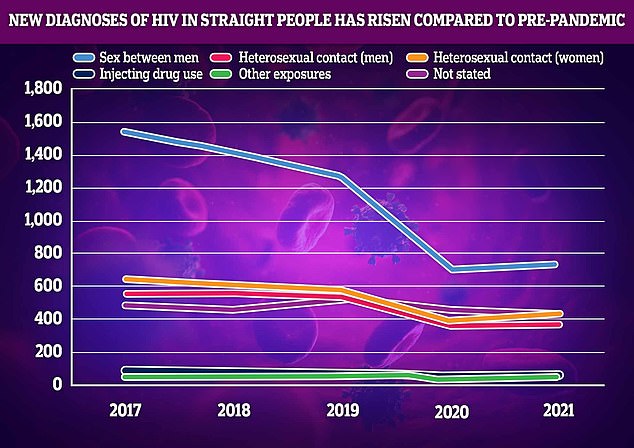 New HIV diagnoses in women who have sex with men have risen  9 per cent in 2021, compared to a 32 per cent decrease in the year pre-pandemic. There are also calls to test more heterosexuals men for the virus after tests in this group fell 41 per cent last year

Prior to 1996, HIV was a death sentence. Then, anti-retroviral therapy (ART) was made to suppress the virus. Now, a person can live as long a life as anyone else, despite having HIV.

Drugs were also invented to lower an HIV-negative person’s risk of contracting the virus by 99%.

In recent years, research has shown that ART can suppress HIV to such an extent that it makes the virus untransmittable to sexual partners.

That has spurred a movement to downgrade the crime of infecting a person with HIV: it leaves the victim on life-long, costly medication, but it does not mean certain death.

Here is more about the new life-saving and preventative drugs:

It suppresses their viral load so the virus is untransmittable

In 1996, anti-retroviral therapy (ART) was discovered.

The drug, a triple combination, turned HIV from a fatal diagnosis to a manageable chronic condition.

It suppresses the virus, preventing it from developing into AIDS (Acquired Immunodeficiency Syndrome), which makes the body unable to withstand infections.

After six months of religiously taking the daily pill, it suppresses the virus to such an extent that it’s undetectable.

And once a person’s viral load is undetectable, they cannot transmit HIV to anyone else, according to scores of studies including a decade-long study by the National Institutes of Health.

It is 99% effective at preventing HIV

This pill works like ‘the pill’ – it is taken daily and is 99 percent effective at preventing HIV infection (more effective than the contraceptive pill is at preventing pregnancy).

It consists of two medicines (tenofovir dosproxil fumarate and emtricitabine). Those medicines can mount an immediate attack on any trace of HIV that enters the person’s bloodstream, before it is able to spread throughout the body.

Testing levels dipped by about fifth during the pandemic.

Lockdown forcing the closure of sexual health clinics, reduced appointment and testing capacity due demands of the pandemic, and people staying away out of fear of catching the virus are thought to be factors.

And HIV diagnoses in women who have sex with men have risen 9 per cent in 2021, compared to a 32 per cent decrease in the year pre-pandemic.

Diagnoses in men remained stable but there are fears the decline in testing means they have the virus and don’t know it.

Dr Alison Brown, interim head of HIV surveillance at UKHSA, said: ‘The end of HIV transmission is within our reach in England.’

She warned, however, that Covid has ‘slowed progress’ in certain areas, including testing among heterosexuals.

Ian Green, chief executive of the Terrence Higgins Trust, said: ‘Testing, testing and more testing is crucial if we’re to make the inroads necessary to end new HIV cases by 2030.

‘That means levels of testing not just returning to pre-Covid levels but accelerating past it.

‘Today’s data shows upping testing among heterosexuals — and particularly men — needs to be made a priority.’

The Government previously vowed to end all HIV transmission in England by 2030.

Similar warnings about HIV have been made in Europe.

The European Centre for Disease Prevention and Control and the World Health Organization issued a warning that under-diagnosis of HIV on the continent meant people were not getting the care they need.

They estimated that one in eight people with the virus were unaware they had it.

Left untreated, this leads to Aids – the name for a series of deadly infections which the weakened immune system cannot tackle.

Medical advances over the past four decades mean patients with the virus can have unprotected sex without fear of passing it on by taking regular medication.

But the ultimate goal of finding a cure for HIV has so far eluded scientists.

HIV tests are free and available through GP surgeries, local hospitals and sexual health clinics, as well as by using a self-testing kit.

People are advised to reduce their risk of HIV by using condoms during sex and to never share needles.

Fears over a lack of HIV testing come just weeks after England’s sexual health services warned they are at ‘breaking point’ as they battle funding cuts and surging demand.

Local councils said they had 4million consultations for sexual health services last year representing a 16 per cent rise in demands compared to 2020, and a 36 per cent rise since back in 2013.

Despite this they said the funding for the services has fallen 17 per cent.

The Local Government Association has said without more cash there could be an increase in unwanted pregnancies and sexually transmitted infections.