As of March 7, 2022, the ongoing coronavirus disease 2019 (COVID-19) pandemic, which is caused by the severe acute respiratory syndrome coronavirus 2 (SARS-CoV-2), has caused over six million deaths worldwide.

Respiratory viral infection rates are often exacerbated by sleep and circadian rhythm dispersion (SRCD). In particular, shift workers are more likely to encounter SRCD, which predisposes them to an increased risk for respiratory viral infections. Studies on SARS-CoV-2 have provided evidence of the links between shift work causing SRCD and the risk of contracting COVID-19. 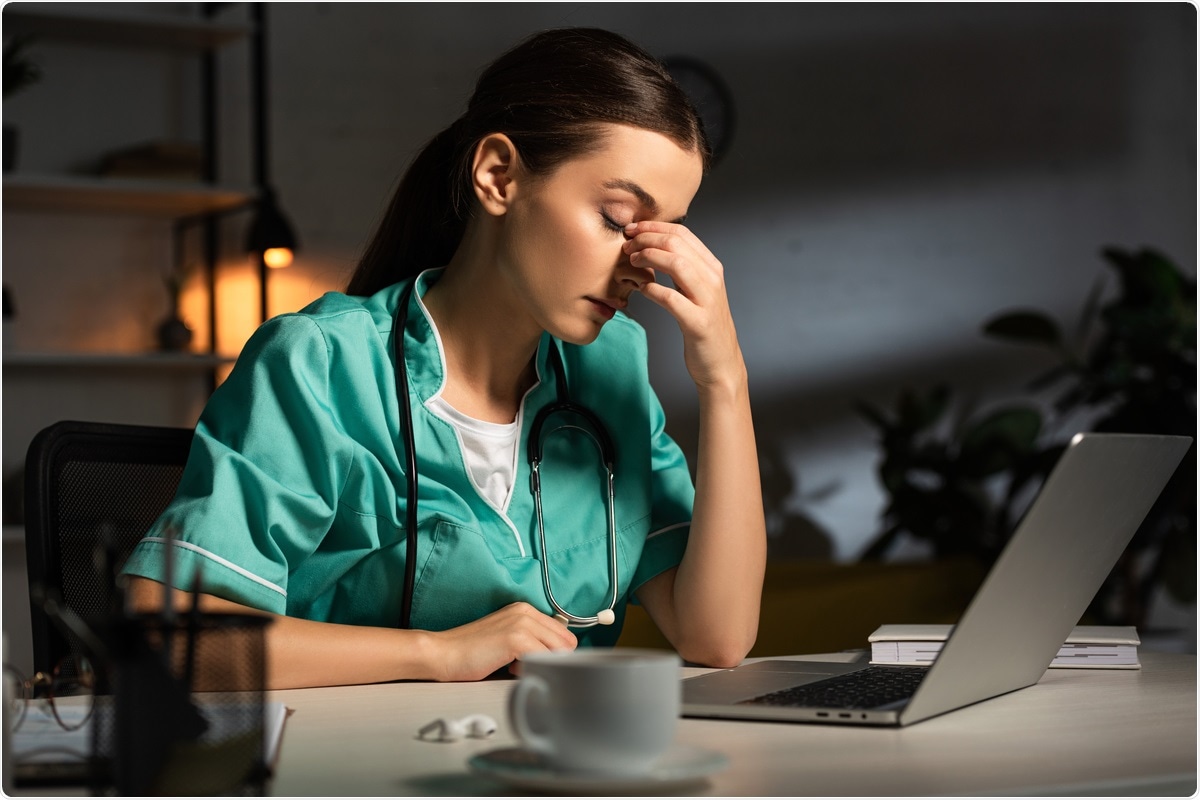 A recent study published in the bioRxiv* preprint server explores the effect of SRCD on mouse lung transcriptome after six of hours sleep deprivation.

On analyzing the sleep-deprived (SD) downregulated genes, repression of immune system pathways was observed. In particular, SD was found to upregulate furin, which modulates the entry of SARS-CoV-2 by cleaving the spike protein, while it downregulates Toll-like receptors (TLRs), which trigger innate immune responses that can also affect the pathogenesis of COVID-19.

An escalation in the proinflammatory transcription factor Nfkbia, which is a major down-regulator of nuclear factor-kappa (NF-kB) by 46% and its repressor Tle1 by 43% were found after sleep deprivation. Twelve genes were found to upregulate SD, whereas 23 genes were downregulated by SD, the latter of which positively affects NF-kB function.

Amongst the SD downregulated genes, 215 gene ontology biological pathways (GOBP) terms were significant, of which 72% were immune system pathways, 23% were adaptive immunity specific terms, and 18% were innate immune specific terms. These findings are suggestive of a suppressed immune system impacting pathways that are involved in viral entry, replication, and trafficking due to sleep deprivation.

Out of 2,029 cycling genes, 911 were deranged by SD. Analysis of 3,532 non-rhythmic-SD differential genes revealed that many were directly affected by SD but were not circadian regulated.

Comparatively, an analysis of the rhythmic-SD differential genes reflected an increased circadian regulated gene expression. Dysregulation of rhythmic pathways like signaling, metabolism, protein folding, post-translational protein modification, and RNA processing was observed after SD, all of which contribute to disrupted circadian lung physiology.

How these results compare to previous findings

The researchers also cross-referenced their results with three independent studies. Out of the 50 genes investigated by Daniloski et al., ten were dysregulated post SD, out of which eight were found to participate in SARS-CoV-2 replication. Out of the 32 genes involved in the viral entry as identified by Zhu et al., eight were found to be SD differential genes and consisted of four upregulated and four downregulated genes.

A comparison of the 50 host factors mentioned by Wei et al. to SD differential genes of the study revealed an intersection of 11 genes, eight of which were upregulated genes primarily involved in transcriptional regulation. These observations demonstrate amplification of processes and host factors after acute SD that affect the SARS-CoV-2 life cycle.

Out of the 332 human-virus protein-protein identified by Gordon et al., 87 overlapped with SD differential genes of the study, 40 of which were recognized to function in viral replication, 18 affected SARS-CoV-2 immune evasion, with several others impacting SARS-CoV-2 infection. These findings suggest a differential expression of many host factors post SD that may potentiate SARS-CoV-2 replication. 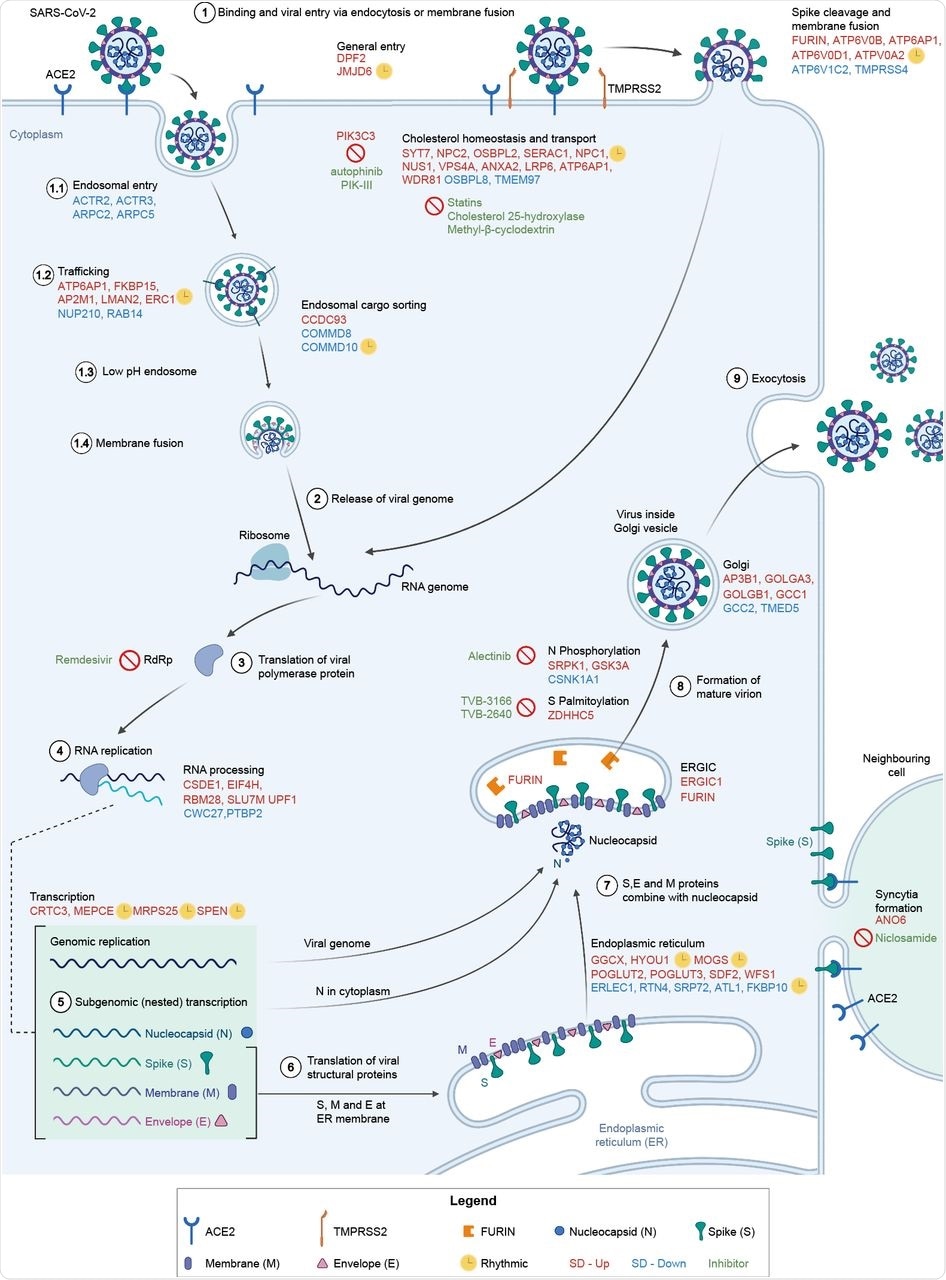 Involvement of differentially expressed genes after sleep deprivation in the SARS-CoV-2 life cycle. (1) SARS-CoV-2 binds ACE2 and enters via endocytosis or membrane fusion, depending on the availability of TMPRSS2/4. (2) The viral RNA genome is released into the cytoplasm and (3–4) replicated and (5) transcribed by RdRp. (6) Viral structural proteins are translated by host ribosomes. (7–8) The virion assembles and (9) is released. All differentially expressed genes shown (red font for SD-Up, blue font for SD-Down) apart from FURIN, TMPRSS4, GSK3A, SRPK1, and CSNK1A1 are critical host factors overlapping with at least one of the studies from Gordon et al. (2020b), Daniloski et al. (2021), Wei et al. (2021), or Zhu et al. (2021). Drugs targeting SD differential or viral genes mentioned are in green font. Cycling genes are denoted by a yellow clock. ACE2 = angiotensin-converting enzyme 2, ERGIC = ER-Golgi apparatus intermediate compartment, RdRp = RNA-dependent RNA polymerase, TMPRSS2 = transmembrane protease serine 2. Adapted from Du et al. (2009) and from “Coronavirus Replication Cycle” by BioRender.com. Created with BioRender.com.

A reduction in Zdhhc5 led to depalmitolylation of spike proteins compromising the membrane fusion, as well as viral entry; however, SD was found to increase the transcription of Zdhhc5. These findings suggest an increase in SARS-CoV-2 replication post SD.

The data also revealed suppression of immune-associated genes after SD that allow for viral persistence. For example, SD was found to alter the expression of RNF41 and TBKBP1, which regulate interferon production, are targeted by SARS-CoV-2 proteins.

SARS-CoV-2 was also found to use the NK-kB pathway as an immune evasion strategy by causing differential expression of Tle1, Trim59, and E3 ubiquitin ligases Mib1. SARS-CoV-2 evades the innate immune response by exploiting the ubiquitination machinery. In fact, six SD differential genes that were implicated in ubiquitination code for proteins, have been found to interact with proteins of SARS-CoV-2.

The current study confirmed alterations in mice lung transcriptomes following sleep deprivation, which could explain the increased risk of severe SARS-CoV-2 infection and other respiratory viral infections after SCRD, which is often associated with shift work. Taken together, these findings could guide therapeutic approaches that could prevent and treat SARS-CoV-2 infection.

I am a medical content writer and editor. My interests lie in public health awareness and medical communication. I have worked as a clinical dentist and as a consultant research writer in an Indian medical publishing house. It is my constant endeavor is to update knowledge on newer treatment modalities relating to various medical fields. I have also aided in proofreading and publication of manuscripts in accredited medical journals. I like to sketch, read and listen to music in my leisure time.