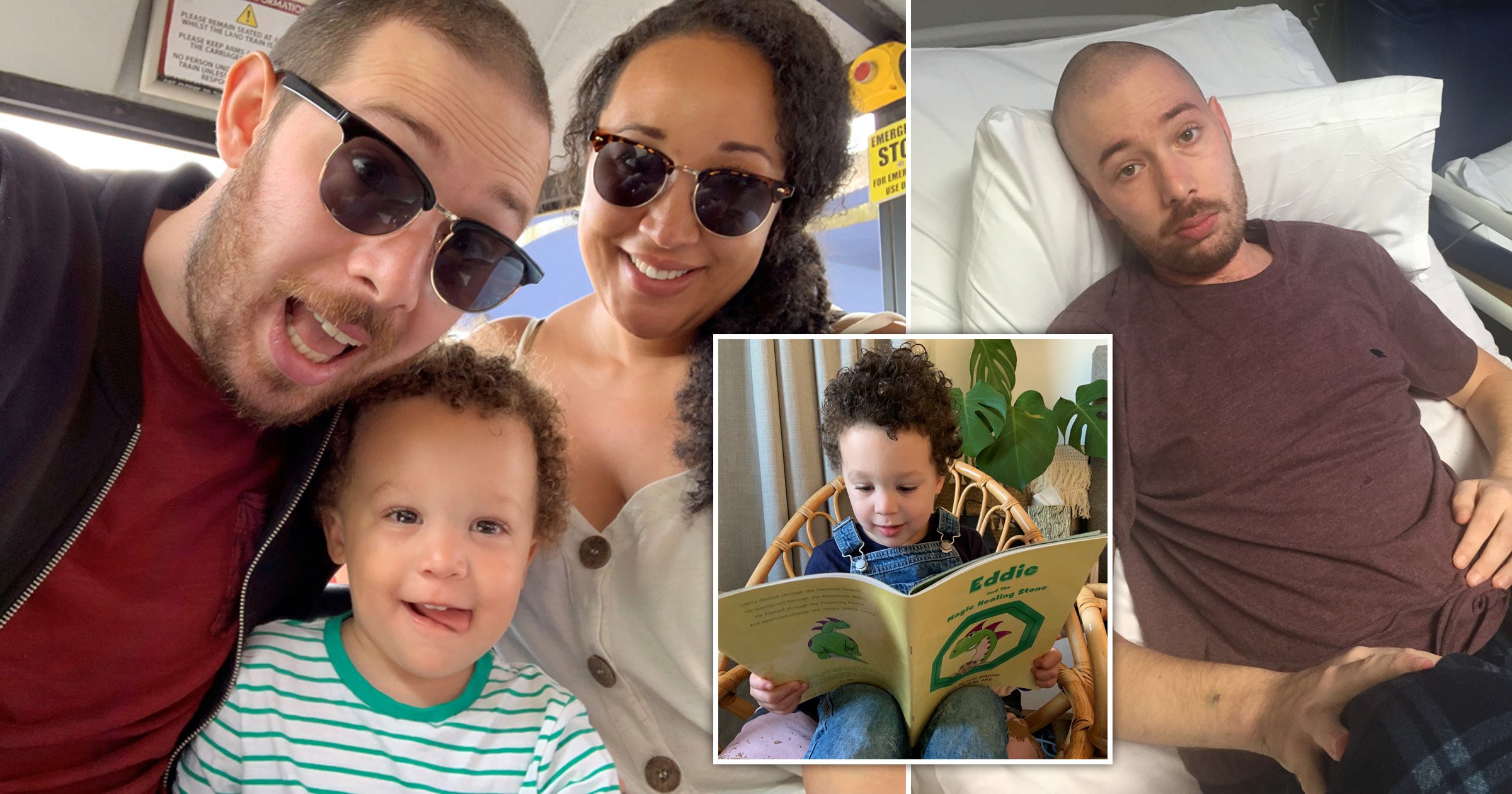 A doctor who died from a rare brain tumour aged just 30 has written two children’s books for his three-year-old son.

Paediatrician Aria Nikjooy, from Manchester, explained illness in parents and the importance of family – as a final heartbreaking gift to his little boy Eliyas.

The dad was only 27 when he was diagnosed with a malignant brain tumour, called a grade 4 cerebellar medulloblastoma, in November 2018.

Despite having the tumour removed, the cancer returned several times before spreading to his spine and Aria died in February this year.

While undergoing chemotherapy in 2019, he wrote Eddie and the Magic Healing Stone for Eliyas, now three.

Before Aria died, he managed to get the book published last September and read it aloud to Eliyas, with the little boy sitting on his lap.

He has one more children’s book set to come out soon, called Eddie and the Last Dodo on Earth – a final surprise for Eliyas.

Aria’s wife, Naomi, a GP registrar, 33, said: ‘I am so proud of Aria. Lots of people dream of writing books and always talk about it but never get round to it.

‘He was in the worst state he could possibly be in, but he was still motivated to write books for our son.

‘When I read his second children’s book, I cried – it was so beautiful.

‘It will be emotional reading it to Eliyas without Aria here, but I’ll be doing it for him.’

Aria was working night shifts as a paediatric doctor on the neonatal ward at Saint Mary’s Hospital when he experienced terrible headaches.

He put these down to the pressures of his job, coupled with the stress of raising a one-year-old.

But at the beginning of November, his headaches became so severe he had to go home during a shift. When his speech was slurred, Naomi took him to the hospital.

They were told there was a ‘suspicious mass’ on Aria’s brain, which they took a sample of for tests.

‘As we were both doctors, we knew what that meant – but we did not say it out loud to each other,’ said Naomi.

‘No amount of medical training could prepare either of us for that news. It was just pure shock.

‘We did a good job of shielding Eliyas from it. He didn’t know at that stage anything was wrong.’

Aria had the large tumour on his cerebellum removed on November 9 – the day before his birthday – in a seven-hour operation at the Salford Royal Hospital.

After the operation, Aria was sick every day and lacked any balance because of where the tumour had been in his brain.

He had to relearn how to walk, talk, eat and write, so after being discharged from hospital in early 2019, Aria decided to pen a children’s book for his son Eliyas.

The texts were written at home as Aria was undergoing four rounds of chemotherapy, while Eliyas was at nursery and Naomi at work.

The mum continued: ‘Aria knew that one day we would have to explain cancer to Eliyas and this would make it a lot easier.

‘I thought it was such a great idea so I encouraged him to do it. I knew Eliyas would love it.

‘Aria had such a wild imagination – he’d describe it as a very childish mind. I guess that’s why he did paediatrics, because he could relate to children.’

In November 2019, a year after his diagnosis, Aria returned to work. But in March 2020, the cancer sadly returned.

Naomi added: ‘He was finally feeling himself again when he got the news following a routine check-up. It was so cruel.

‘After a cancer diagnosis you always have in the back of your mind “what if it comes back?”. But Aria was such a positive soul and was determined to not even consider that possibility.

‘He was talking about when he wanted to be a consultant, and how many books he wanted to write. But it wasn’t meant to be.’

Aria continued having multiple operations, each time getting weaker. So the parents tried to explain to Eliyas what was happening.

‘He showed quite a lot of concern, but at that age his understanding of being ill was quite limited – he thought you could just have a spoonful of medicine and you would be okay.’ said Naomi.

After approaching many publishers, Aria’s determination was rewarded when The Endless Bookcase agreed to publish Eddie and the Magic Healing Stone, which came out in September.

Naomi recalled: ‘It was very emotional, watching him reading the book to our son.

‘Eliyas absolutely loved it, and although he wasn’t saying many words at that point he loved roaring along when the characters roared.

‘His nursery brought all the characters to life and acted out the book, and he is so proud of telling everyone there that his daddy wrote it.’

In early December, the family received the devastating news that the cancer had returned and spread through Aria’s spine.

After Christmas, Aria’s health deteriorated quickly and he died at home.

Since his death, Naomi said reading the books to Eliyas had been a huge support in helping him understand what has happened.

She has been keeping busy organising the publication of Aria’s memoir Broken Brain: Brutally Honest, Brutally Me, aimed at adults.

She hopes it will give strength to others affected by cancer and could be used as a manual for doctors to help them understand what it is like to be an NHS patient.

Proceeds from all of Aria’s children’s books will be going to four organisations that supported him and his family – Brain Tumour Research, the Royal Medical Foundation, the Royal Medical Benevolent Fund and the Society For Assistance Of Medical Families.

For more details about Brain Tumour Research and its Wear a Hat Day campaign, visit their website.

You can purchase Aria’s books on Amazon.

Do you have a story you want to share?