A Christmas party is always a good excuse to dig out the ‘special occasion’ tableware.

But you should keep any red bowls or plates in the cupboard this festive season as picky eaters will likely avoid them, a study suggests.

Researchers from the University of Portsmouth examined the effect of colour perception among both picky and non-picky eaters. 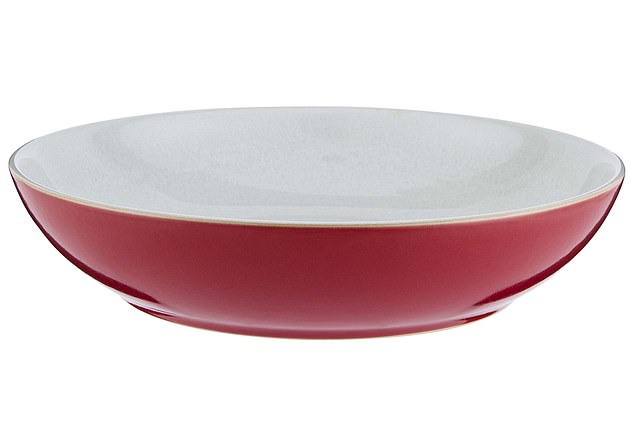 A Christmas party is always a good excuse to dig out the ‘special occasion’ tableware. But you should keep any red bowls or plates in the cupboard this festive season as picky eaters will likely avoid them, a study suggests

Nearly 50 participants were first surveyed to measure their food neophobia – a reluctance to eat or try new food.

They were divided into two groups, picky and non-picky eaters, and tasted the same brand of salt and vinegar crisps served in red, white and blue bowls.

Analysis revealed that both saltiness and desirability to eat the snack were greatly influenced by the colour of the bowl among picky eaters.

Picky eaters rated the saltiness higher when tasting food from the blue and red bowls, compared to the white bowls.

The researchers also discovered that eating from a red bowl was the least desirable, which may be due to the association between the colour red and danger.

Writing in the journal Food Quality and Preference the team said: ‘Picky eating is characterised by a limited intake and avoidance of foods which can increase health risks, including nutritional deficiencies and health-related disease.

‘It is therefore important to understand the factors that act to “push and pull” such picky eating behaviour.

‘The main study findings were that the colour of the bowl in which the food was served had an influence on the perceived saltiness and desirability of the snack food for picky eaters.

‘It is possible that people have negative mediated expectations when seeing the colour red.

‘Thus, when presented with the red bowl in this current study, it could be that individuals’ perception was impacted by previous expectations and the red was seen in a negative frame and thus the associated food was seen as less desirable.’

Lead author Dr Lorenzo Stafford said: ‘Our study is the first to provide an insight into the relationship between colour and taste in picky eaters.

‘Since picky eating can be stressful for both the individual and family relations, these findings offer preliminary evidence for how colour might help enhance the food eating experiences.’

Meals should be based on potatoes, bread, rice, pasta or other starchy carbohydrates, ideally wholegrain, according to the NHS

• Base meals on potatoes, bread, rice, pasta or other starchy carbohydrates, ideally wholegrain

• 30 grams of fibre a day: This is the same as eating all of the following: 5 portions of fruit and vegetables, 2 whole-wheat cereal biscuits, 2 thick slices of wholemeal bread and large baked potato with the skin on

• Eat some beans, pulses, fish, eggs, meat and other proteins (including 2 portions of fish every week, one of which should be oily)

• Choose unsaturated oils and spreads and consuming in small amounts