Old diabetes drugs slash the risk of dementia by more than a FIFTH, study finds

A class of diabetes drugs that have fallen out of fashion may help prevent Alzheimer’s, a major study suggests.

Thiazolidinediones (TZDs) reduced the risk of developing the disease by more than a fifth in a study of more than half a million patients.

The drugs are thought to work by reducing bad cholesterol in the blood and boosting blood flow and oxygen supply to the brain.

But researchers from Arizona University, who did the latest study, are hoping the drugs can find a new lease of life.

They say the drugs should be given to type 2 diabetics to prevent cognitive issues that could turn into dementia.

Previous studies have shown people with this form of diabetes are at a higher risk of the memory-robbing condition.

Having too much sugar in the blood can damage organs, including the brain. 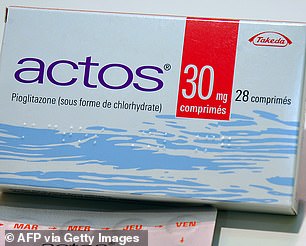 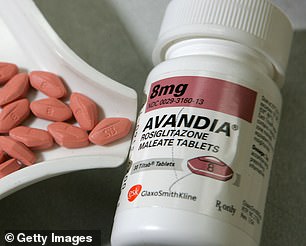 TZDs can drop dementia risk by more than 20 per cent in type 2 diabetics that use the drug. These drugs have largely been removed from the US market over risks related to heart failure and bladder cancer

Each of the participants was over the age of 60 and had received either a TZD or other popular type 2 diabetes drugs like metformin or sulfonylurea.

These drugs are typically taken once daily, but in some cases a patient may take up to three doses per day.

They work by activating genes in a cell’s protein that make them more sensitive to insulin.

This, as a result, makes the body more able to process glucose in the blood.

While they were once a popular treatment for the disease, they have since fallen out of favor across the US and Europe.

The drugs have been linked to fluid build up in the heart and even an increased risk of heart failure.

They have also been linked to bladder cancer, liver toxicity, losses in bone mass and severe weight gain.

The drugs were pulled from many international markets in the early 2010s.

They now see rare, if any use, across the world as they have been outclassed by more modern type 2 diabetes drugs.

Participants had their health tracked using Veterans Affairs medical records for an average of eight years each.

Those who used a TZD alone had a 22 per cent lower risk of developing all-cause dementia than those who used metformin within the first year.

There was also an 11 per cent drop in risk of dementia in particular, and a 57 per cent fall in cases of vascular dementia – caused by reduced blood flow to the brain.

The drugs were even more effective at preventing cognitive problems when they were taken alongside metformin – dropping the risk by another 11 per cent.

The research could bring a second-life to a class of drugs that has largely been left by the wayside.

They work by binding to a cell’s protein and activating genes that help increase the blood’s sensitivity to the hormone.

Avandia, one of the most popular TZDs, was pulled from the US market by the Food and Drug Administration (FDA) in 2010 after it was linked to an increased heart attack risk.

Its main competitor Actos has also been linked to heart issues, along with bladder cancer and liver toxicity.

While Actos is still available in the US, it is rarely prescribed anymore as newer, safer, diabetes drugs have since taken its place on the market.

The drugs have also been linked to loss of bone mass and uncharacteristic weight gain in users.

Development of type 2 diabetes has long been linked to risk of dementia.

Alzheimer’s has even been described by some as ‘type 3 diabetes’ because of the similarities in how they affect the body at the cellular level.

The Centers for Disease Control and Prevention warns that around ten per cent of US adults are suffering from diabetes.