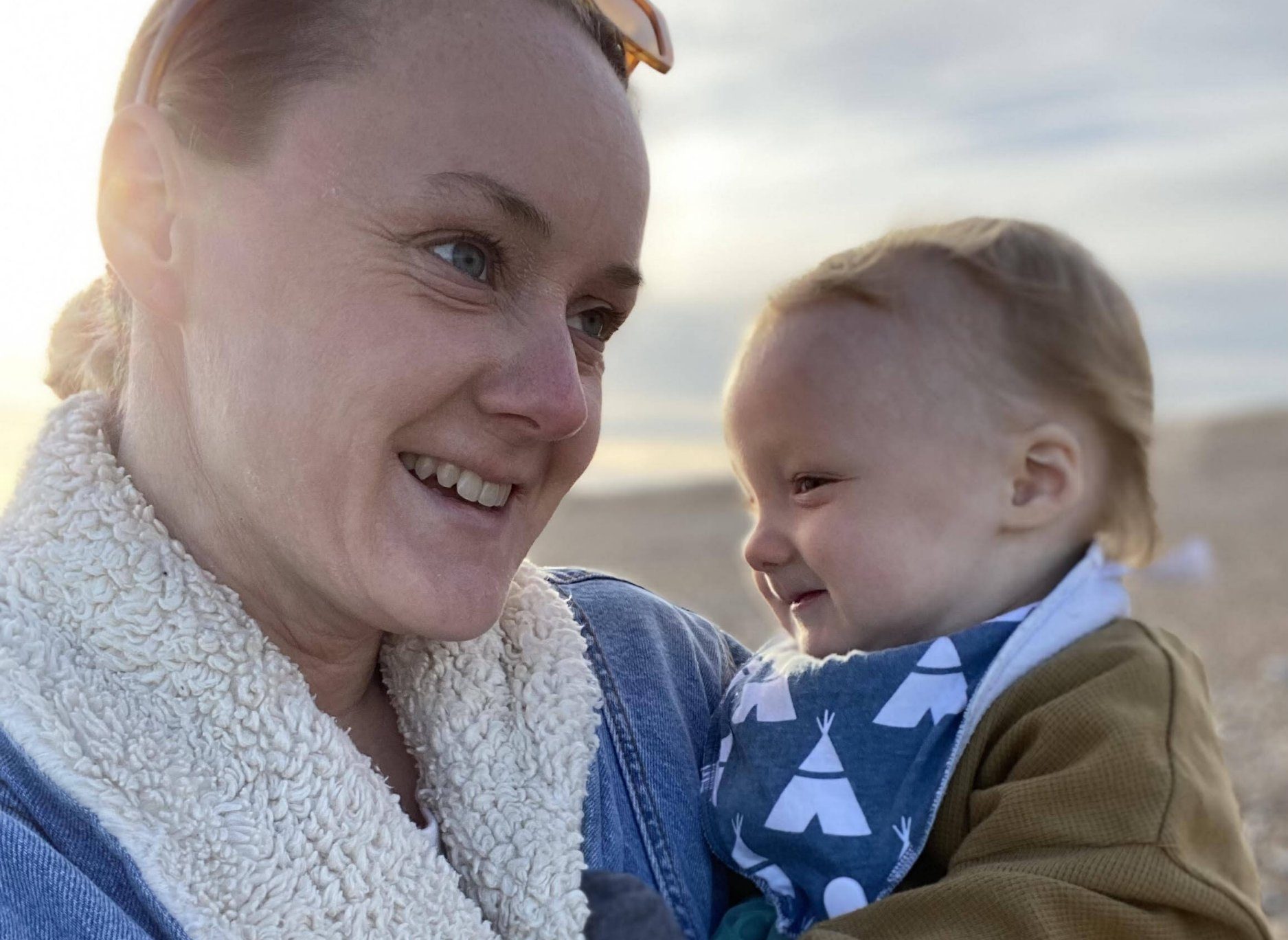 This mum was left suicidal during Topical Steroid Withdrawal, yet cruel trolls brand her ‘irresponsible’ for becoming a mother with the condition.

Bethany Norman, 33, has suffered from eczema since she was four years old, which was managed by her parents with moisturiser, bath oils and later, steroid creams.

The full time mum from Surrey recalls struggling after PE lessons with blood pouring down from the backs of her knees due to allergies and the heat, but says at the time she ‘just got on with it.’

However, by the time Bethany was 25, her eczema was becoming a ‘lingering nuisance,’ so she visited a dermatologist who prescribed her a week of oral steroids, a steroid cream, and an immunosuppressant ointment.

‘The first dermatology referral that I recall was in my early 20s, as my GP wondered why my childhood eczema hadn’t gone,’ she explained.

Although her skin gradually improved over a few weeks by the summer of 2019, when she was 29, her symptoms were worse than ever.

Bethany said: ‘My skin was particularly good for a couple of years, and I even sent the dermatologist a card to thank her.

‘I went through a lot of stress in my personal life in 2019 and around that time my skin gradually got worse. I couldn’t have any labels in my clothes touch my skin, it became extra, ultra-sensitive.’

Bethany had heard of Topical Steroid Withdrawal (TSW), a condition that occurs when steroids are stopped after prolonged use, but still hoped that more steroid medication prescribed by the doctor would ease her suffering.

But, after taking the oral steroids and applying the creams recommended, she developed painful rashes and dehydrated, irritated skin – symptoms commonly associated with TSW.

In July 2020, Bethany stopped using steroids completely, and by October she had to present herself at hospital because her skin had got so bad.

As Topical Steroid Withdrawal is not yet fully understood, it can be difficult to receive a diagnosis. Topical steroids are often the first port of call when it comes to skin conditions, but some people are able to use them without a reaction while others are not.

In Bethany’s case, she says her symptoms were labelled as ‘just eczema’ by a dermatologist, who was advised to go back onto steroids or try new immunosuppressants.

She opted for light therapy due to the Covid-19 pandemic, but had to cease all treatment when she found out she was pregnant with son Albie, who was born in 2021.

Due to the escalation in her condition, Bethany struggled to take care of herself and her baby, so her mum stepped in as a carer for the pair.

Things got so bad in November that Bethany began to feel suicidal, describing her situation as ‘survival mode’ due to side effects listed on the NHS website including ‘burning, stinging, itching or peeling of the skin, and oozing, open sores.’

When she attended her local hospital’s A&E department, she claims she was not offered treatment, while her discharge letter allegedly made ‘no mention of suicidal thoughts’.

‘After a seven-hour wait, I was refused any treatment and told its best to await my dermatology appointment,’ said Bethany. ‘I don’t know what screams needing help more than feeling suicidal.’

Bethany was so distressed that she left the hospital ‘unable to speak’ and in hysterics. She believes the condition coupled with the way it was handled caused her mental health to rapidly deteriorate.

She said: ‘You need a lot of constant help, a lot of understanding without an end date to all of your suffering. It’s unimaginable for everyone involved.

‘I don’t feel like I’ve been living the last nearly three years yet I’ve had a baby in that time.’

Bethany has found a wider support network since posting her story online, but not all commenters are sympathetic.

‘I was recently told I was irresponsible and selfish for having a baby during TSW,’ she recalled. ‘The woman told me I am just looking for sympathy and have been selfish by not wanting to wait to have a baby.’

The 33-year-old continued: ‘She told my friend, “she constantly says how she can barely look after herself yet thought it was a good idea to have a baby? Bizarre behaviour.”

‘I was outraged and upset someone would take the time to project onto someone who had openly spoken about their struggles.’

Despite this, though, she’s thankful for those that have helped her through.

‘My mum has been my absolute rock physically and mentally, especially over the last six months,’ said Bethany.

‘I’ve gently encouraged a few people in the TSW community to publicly share their story on their own Instagram.

‘The main reason I encourage doing so is the community feel, the connections and the support you receive. It had additional perks of spreading awareness and educating others too.’

She’s not going to let bullies stop her either, adding: ‘I’ll never stop advocating. Hundreds of thousands of us deserve more.’