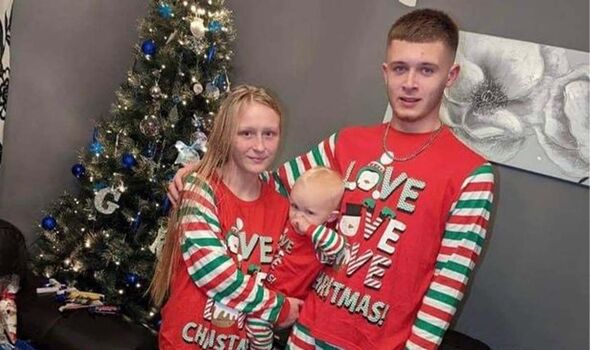 A family has been left heartbroken by the sudden loss of a young dad. Travis Brash, 19, was found dead at his home in the Thorney Close area of Sunderland.

His worried family called police after they received messages from him and were unable to gain entry to his address.

Travis was discovered by officers on January 6, the ChronicleLive reports. He leaves behind his devastated family as well as his fiancée Leonie Cook, 18, and their two-year-old son Kyran.

Leonie had been in a relationship with Travis, who she affectionately called ‘Trav’, for three-and-a-half years. She said: “It was the worst moment of my life.

“How do you explain to a two-year-old that he’s not going to see his dad again? He keeps pointing to the sky, saying ‘dad’ and blowing kisses.

“Trav was amazing with Kyran, he loved him to bits. He knew how to make him laugh in a way I didn’t know how to. I have got to manage, with me having Kyran, but it’s really hard. I try not to cry in front of him. When he’s asleep, that’s when I cry.

“I’m just going to have to be mam and dad together and never let him forget who his dad was.”

Leonie met Travis when they were both at the Beacon of Light School and she fell pregnant with Kyran five months after they got together. She said he proposed to her in a room filled with rose petals. She said: “We hadn’t planned a wedding or anything yet but it would have happened one day. I just loved everything about him. He had a beautiful smile.”

Leonie said Travis was close to his family and his best friend Elliott Padgett, 18. She described him as “loving” and protective over those closest to him.

She said: “He loved all of his family and friends. He would always protect the people he loved. He absolutely loved his brother and sister but he would wind them up.

“His dad was like his best friend, he did absolutely everything for him. Trev and his mam were like the same person, personality-wise. He loved them so much.”

Leonie said Travis had suffered from mental health issues for years and his family did everything they could to support him. She said that when he reached the age of 18 he had to seek support from a different mental health worker. She said he struggled with the change and decided not to go back.

Leonie, who is living with her family in Pennywell, Sunderland, said: “His family is absolutely broken. They’re trying to be strong for the little ones but we can only be strong for so long. They have always been worried about this happening and it’s happened. There is a lot of help out there but I feel there should be more.

“Trav would always have his down days. We could be in the happiest moments of our life and he would still be down. You would be able to tell when he was having a bad day, he would be down and he would be upset. We were really shocked as he’s been alright, he was going to come off his antidepressant medication but he didn’t.”

Leonie said the alarm was raised when Travis sent messages to those closest to him. She said she received a message from him which said: “Give Kyran a kiss and tell him that I love him”.

She said: “He text his best friend and told him to always be there for Kyran and look after Kyran. Elliott went through everything with him.

“He didn’t realise how loved he really was. If love could have saved him he’d still be here. There’s never going to be anyone like him again. He will be missed very much.”

Kelly, who is heartbroken by her son’s death, said: “Our whole world has fallen apart. We hope he has found the peace he was searching for from his demons. If love could of saved our beautiful boy he would of lived a million lifetimes.

“I wish there was more help for people with mental health issues. Let’s hope this raises more awareness and schools start to take children’s mental health a lot more seriously.”

Leonie has set up a Go Fund Me page to help with the cost of his funeral. More than £3,600 has already been donated to the fund. Travis’ funeral is set to take place in Sunderland later this month.

She said: “I want to say thank you so much, I appreciate it. I hope one day I can repay them all back.”

If you or someone you know is struggling with mental health concerns, then you can call 116 123 to speak to a Samaritan, any time, day or night. You can also email them at [email protected] or visit their website here.