The FDA in a Wednesday announcement said it has approved Abbott’s BinaxNow and Quidel’s QuickVue tests that the public will soon be able to purchase without a doctor’s prescription. 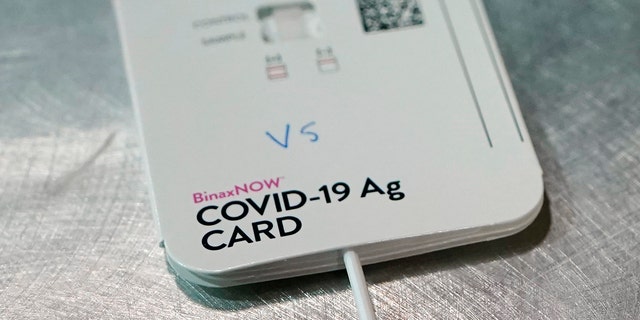 A BinaxNOW rapid COVID-19 test made by Abbott Laboratories, in Tacoma, Wash. On Wednesday, March 31, 2021, the FDA said Abbott’s BinaxNow and Quidel’s QuickVue tests can now be sold without a prescription for consumers to test themselves repeatedly at home.
(AP Photo/Ted S. Warren)

“Screening testing, especially with the over-the-counter tests authorized today, is an important part of the country’s pandemic response—many schools, workplaces, communities, and other entities are setting up testing programs to quickly screen for COVID-19. With the FDA’s authorization of multiple tests, the public can be assured these tests have met our scientific standards for emergency use authorization. As we’ve said all along if it’s a good test, we’ll authorize it,” said Dr. Jeff Shuren, director of the FDA’s Center for Devices and Radiological Health, in a statement.

Both tests require the user to collect a sample via a nasal swab that is then inserted into a test strip. Results take between 10 and 20 minutes.

HOW CAN I AVOID CORONAVIRUS VARIANTS?

Abbott said its test would be priced in the “single digits” per test and should be available in “coming weeks” at pharmacies, supermarkets and other chains. The company can produce about 50 million tests per month. Quidel did not disclose pricing for its test.

Both companies said they would sell their tests in two packs. Repeat testing is important to reduce the chances of false results. Both tests can be used by adults to test children 2 years and older.

While the move by the FDA is expected to vastly expand the availability of cheap home tests that many experts have advocated since the early days of the outbreak, the announcement came as U.S. testing numbers continue to slide, even as the number of new coronavirus infections is rising again.

“Vaccines are incredibly important but they are not the end-all, be-all to this pandemic,” Mina said. “We need other tools in our arsenal and the widespread availability and rapid scale-up of tests for people to use in the privacy of their homes is going to be an extraordinary gain.”

Last month, the FDA eased its standards for reviewing rapid screening tests, after months of criticism from Mina and other experts that they were delaying the introduction of increased testing.

The Associated Press contributed to this report.