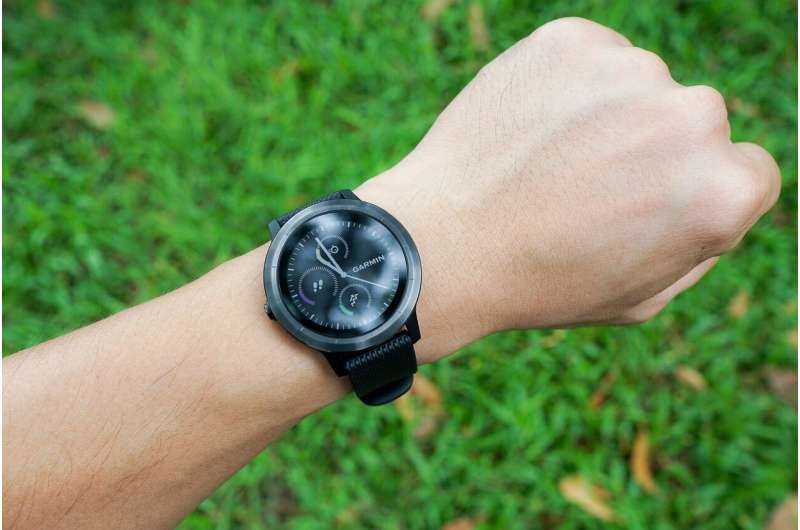 Normally, tests to accurately measure VO2max—a key measurement of overall fitness and an important predictor of heart disease and mortality risk—require expensive laboratory equipment and are mostly limited to elite athletes. The new method uses machine learning to predict VO2max—the capacity of the body to carry out aerobic work—during everyday activity, without the need for contextual information such as GPS measurements.

In what is by far the largest study of its kind, the researchers gathered activity data from more than 11,000 participants in the Fenland Study using wearable sensors, with a subset of participants tested again seven years later. The researchers used the data to develop a model to predict VO2max, which was then validated against a third group who carried out a standard lab-based exercise test. The model showed a high degree of accuracy compared to lab-based tests, and outperforms other approaches.

Some smartwatches and fitness monitors currently on the market claim to provide an estimate of VO2max, but since the algorithms powering these predictions aren’t published and are subject to change at any time, it’s unclear whether the predictions are accurate, or whether an exercise regime is having any effect on an individual’s VO2max over time.

The Cambridge-developed model is robust, transparent and provides accurate predictions based on heart rate and accelerometer data only. Since the model can also detect fitness changes over time, it could also be useful in estimating fitness levels for entire populations and identifying the effects of lifestyle trends. The results are reported in the journal npj Digital Medicine.

A measurement of VO2max is considered the ‘gold standard’ of fitness tests. Professional athletes, for example, test their VO2max by measuring their oxygen consumption while they exercise to the point of exhaustion. There are other ways of measuring fitness in the laboratory, like heart rate response to exercise tests, but these require equipment like a treadmill or exercise bike. Additionally, strenuous exercise can be a risk to some individuals.

“VO2max isn’t the only measurement of fitness, but it’s an important one for endurance, and is a strong predictor of diabetes, heart disease, and other mortality risks,” said co-author Dr. Soren Brage from Cambridge’s MRC Epidemiology Unit. “However, since most VO2max tests are done on people who are reasonably fit, it’s hard to get measurements from those who are not as fit and might be at risk of cardiovascular disease.”

“We wanted to know whether it was possible to accurately predict VO2max using data from a wearable device, so that there would be no need for an exercise test,” said co-lead author Dr. Dimitris Spathis from Cambridge’s Department of Computer Science and Technology. “Our central question was whether wearable devices can measure fitness in the wild. Most wearables provide metrics like heart rate, steps or sleeping time, which are proxies for health, but aren’t directly linked to health outcomes.”

The study was a collaboration between the two departments: the team from the MRC Epidemiology Unit provided expertise in population health and cardiorespiratory fitness and data from the Fenland Study—a long-running public health study in the East of England—while the team from the Department of Computer Science and Technology provided expertise in machine learning and artificial intelligence for mobile and wearable data.

Participants in the study wore wearable devices continuously for six days. The sensors gathered 60 values per second, resulting in an enormous amount of data before processing. “We had to design an algorithm pipeline and appropriate models that could compress this huge amount of data and use it to make an accurate prediction,” said Spathis. “The free-living nature of the data makes this prediction challenging because we’re trying to predict a high-level outcome (fitness) with noisy low-level data (wearable sensors).”

The researchers used an AI model known as a deep neural network to process and extract meaningful information from the raw sensor data and make predictions of VO2max from it. Beyond predictions, the trained models can be used for the identification of sub-populations in particular need of intervention related to fitness.

The baseline data from 11,059 participants in the Fenland Study was compared with follow-up data from seven years later, taken from a subset of 2,675 of the original participants. A third group of 181 participants from the UK Biobank Validation Study underwent lab-based VO2max testing to validate the accuracy of the algorithm. The machine learning model had strong agreement with the measured VO2max scores at both baseline (82% agreement) and follow-up testing (72% agreement).

“This study is a perfect demonstration of how we can leverage expertise across epidemiology, public health, machine learning and signal processing,” said co-lead author Dr. Ignacio Perez-Pozuelo.

The researchers say that their results demonstrate how wearables can accurately measure fitness, but transparency needs to be improved if measurements from commercially available wearables are to be trusted.

“It’s true in principle that many fitness monitors and smartwatches provide a measurement of VO2max, but it’s very difficult to assess the validity of those claims,” said Brage. “The models aren’t usually published, and the algorithms can change on a regular basis, making it difficult for people to determine if their fitness has actually improved or if it’s just being estimated by a different algorithm.”

“Everything on your smartwatch related to health and fitness is an estimate,” said Spathis. “We’re transparent about our modelling and we did it at scale. We show that we can achieve better results with the combination of noisy data and traditional biomarkers. Also, all our algorithms and models are open-sourced and everyone can use them.”

“We’ve shown that you don’t need an expensive test in a lab to get a real measurement of fitness—the wearables we use every day can be just as powerful, if they have the right algorithm behind them,” said senior author Professor Cecilia Mascolo from the Department of Computer Science and Technology. “Cardio-fitness is such an important health marker, but until now we did not have the means to measure it at scale. These findings could have significant implications for population health policies, so we can move beyond weaker health proxies such as the Body Mass Index (BMI).”