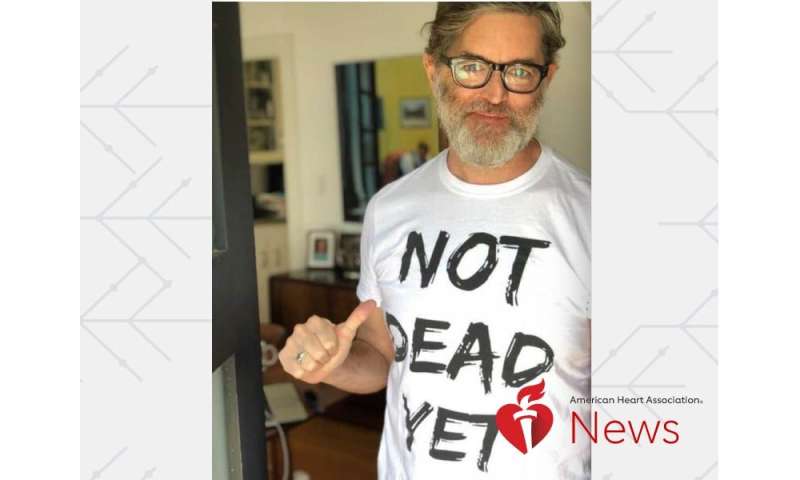 After suffering a stroke that almost killed him, he was hired to play Gregory, a character on NBC’s comedy-drama “This Is Us” who is recovering from a major stroke.

Just as Gregory was learning to walk again, so was Omundson.

“It was a huge milestone for me,” he said. “On the way to filming, my wife pulled the car over and said, ‘Two years ago, you almost died, and now we’re going to the set of the No. 1 show on TV.’ … I’m not back yet, but I’m on the road to getting there.”

Before the stroke, life was good for the Missouri-born thespian. Married, with two teenage daughters, Omundson was flourishing in his career as a character actor in TV series like “Judging Amy,” “Xena: Warrior Princess” and “Psych,” in which he portrayed Detective Carlton Lassiter.

“My cholesterol was low, my blood pressure was great. I was 47 and in the best shape of my life.”

That all changed in a matter of seconds. In April 2017, Omundson was getting ready to board a flight at Tampa International Airport when he suddenly collapsed in the men’s restroom. Alert bystanders called paramedics, who arrived quickly and rushed him to the hospital.

Omundson spent days in intensive care and underwent a craniectomy, in which doctors removed part of his skull to relieve pressure in his brain caused by the stroke.

“My stroke was a weird anomaly,” he said. “I had a dissected carotid artery that we think came from a strenuous weight-lifting exercise, but we can’t pinpoint it exactly.”

He returned to Los Angeles, where he lived temporarily in physical rehabilitation centers before returning home to his wife and kids. He spent months after the stroke confined to a wheelchair.

Gradually, his mobility improved. He began reaching one recovery turning point after the next, from standing up at the bathroom sink to traveling to Las Vegas earlier this year to speak at a fan convention for the CW drama “Supernatural,” in which he played Cain.

“It was a real big deal to be able to walk onstage, on my own power, with my friend Rob Benedict—another actor on the show who’s also a stroke survivor—and to have our wits about us the whole time,” he said. “We answered questions for two hours in front of 3,000 people who were cheering us on.”

When the COVID-19 lockdown started, he immediately began doing his physical rehab via video conferencing. In recent weeks, he’s been combining teletherapy with in-person rehab, but he still prefers doing it remotely because it saves the time and hassle of commuting.

“I’m shocked at how well it works,” he said. “Because my therapists are so good, we’ve got a pretty good routine going.”

Physical therapists were well-prepared to do telehealth even before the pandemic since they were already helping “reintegrate” patients into their homes, said Kelly Anne Tierney, Omundson’s physical therapist at the Centre for Neuro Skills.

“The challenge (now) is simply maximizing the patient’s home as a venue,” she said. “With Tim, we were able to use household items such as shoeboxes and do real-life activities, such as carrying dishes to the sink while practicing walking without an assistive device.”

Omundson’s post-stroke journey is resonating with other survivors. After appearing on “This Is Us,” he received posts on social media from stroke survivors who were thrilled to see someone with their disabilities portrayed on TV.

“Hearing that really fueled me,” he said.

Omundson has returned to playing Detective Lassiter in “Psych 2: Lassie Come Home,” a new movie available to stream Wednesday. While he’s grateful to work again, he admits acting is a lot more difficult since the stroke.

“I used to have this sort of a superpower where I could highlight my lines once and I memorize them, but that took a hit,” he said.

“I was a very physical actor and comedian with grace in my movement. But now, it’s like working in a suit of armor. I used to have a lot of swagger, but it’s hard to have swagger when you can’t tie your own shoes.”

But he’s not complaining. Last year, actor Luke Perry and “Boyz n the Hood” director John Singleton both died in their early 50s after having strokes. Their deaths reminded him how lucky he is to be alive, with so many supportive family members and friends, he said.

“It’s easy to get angry and feel sorry for yourself and say, ‘This sucks.’ I realized early on that’s the last thing I need to do.”

Whenever he gets frustrated, he takes out his phone and looks at his “recovery album” of videos, starting with a clip showing the first steps he took after his stroke.