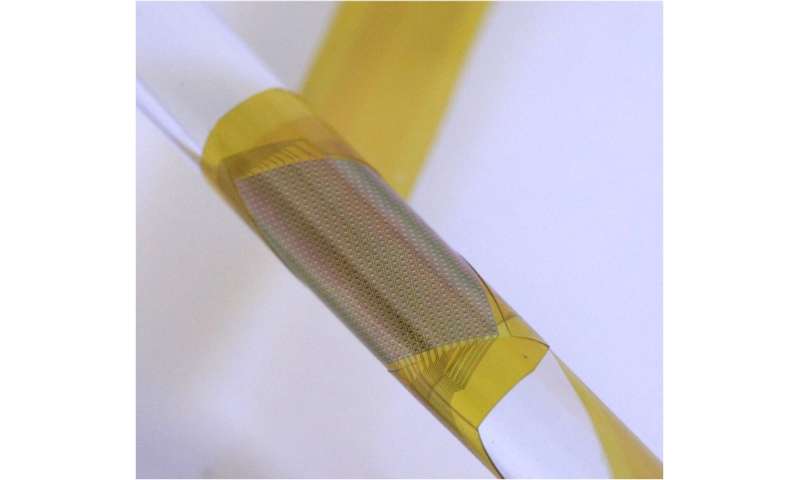 Researchers have demonstrated the ability to implant an ultrathin, flexible neural interface with thousands of electrodes into the brain with a projected lifetime of more than six years. Protected from the ravaging environment of internal biological processes by less than a micrometer of material, the achievement is an important step toward creating high-resolution neural interfaces that can persist within a human body for an entire lifetime.

The results, appearing online April 8 in the journal Science Translational Medicine, were published by a team of researchers led by Jonathan Viventi, assistant professor of biomedical engineering at Duke University; John Rogers, the Louis Simpson and Kimberly Querrey Professor of Materials Science and Engineering, Biomedical Engineering and Neurological Surgery at Northwestern University; and Bijan Pesaran, professor of neural science at New York University.

“Trying to get these sensors to work in the brain is like tossing your foldable, flexible smartphone in the ocean and expecting it to work for 70 years,” said Viventi. “Except we’re making devices that are much thinner and much more flexible than the phones currently on the market. That’s the challenge.”

The human body is an unforgiving place to live if you’re an uninvited guest—especially if you’re made of polymers or metal. Besides attacks from the surrounding tissues and immune system, foreign objects must be able to stand up to a corrosive, salty environment.

Engineering electrical devices that can withstand this assault is an even more daunting prospect. Current long-term implantable devices are almost universally hermetically sealed within a laser-welded titanium casing. Think of a pacemaker, for example.

“Building water-tight, bulk enclosures for such types of implants represents one level of engineering challenge,” Rogers said. “We’re reporting here the successful development of materials that provide similar levels of isolation, but with thin, flexible membranes that are one hundred times thinner than a sheet of paper.”

But when it comes to the human brain, space and flexibility is of the essence. There is no room for rigid devices with millimeter-thick walls. These challenges mean that existing neural interfaces can sample only about a hundred sites, which pales in comparison to the tens of billions of neurons that make up the human brain. Any attempt to make these devices larger invariably runs into the hurdle of wiring logistics—because each sensor requires its own wire, size constraints quickly become an issue.

Viventi and his colleagues have been working on a different approach.

“You need to move the electronics to the sensors themselves and develop local intelligence that can handle multiple incoming signals,” said Viventi. “This is how digital cameras work. You can have tens of millions of pixels without tens of millions of wires because many pixels share the same data channels.”

Through their work, the researchers have already demonstrated flexible neural devices just 25 micrometers thick with 360 electrodes. But previous attempts to keep them safe from harm inside the body have failed, as even the tiniest defect can thwart the entire effort.

“We tried a bunch of strategies before. Depositing polymers as thin as is required resulted in defects that caused them to fail, and thicker polymers didn’t have the flexibility that was required,” said Viventi. “But we finally found a strategy that outlasts them all and have now made it work in the brain.”

All it took was perfection.

In the new paper, Viventi, Rogers, Pesaran and their colleagues demonstrate that a thermally grown layer of silicon dioxide less than a micrometer thick can ward off the hostile environment within the brain, degrading at a rate of only 0.46 nanometers per day. And because this form of glass is biocompatible, any trace amount that dissolves into the body should not create any problems of its own.

They also show that, even though the glass encapsulation is not conductive, the device’s electrodes can detect neural activity through capacitive sensing. This is the same sort of technology that can detect the movements of a finger on a smartphone’s touchscreen. They implanted a 64-electrode neural interface into a rat for over a year and a 1,008-electrode neural interface into the motor cortex of a monkey reaching to a touchscreen. 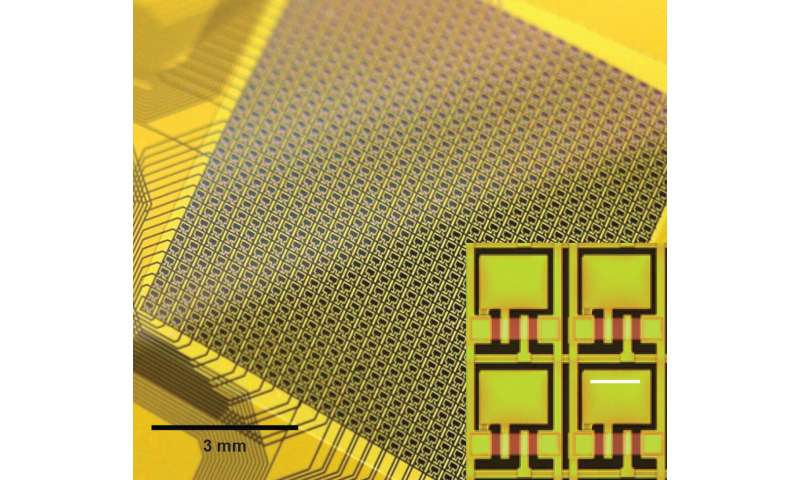 Based on these results and experiments to heat the devices to simulate longer periods of time, the researchers believe their devices could withstand implantation for more than six years.

While these results are enormous steps forward in comparison to current state-of-the-art devices, they’re not anywhere near the level of the researchers’ aspirations. Viventi’s student is currently working to scale the prototype up from 1,000 electrodes to more than 65,000. And they expect that by using commercial foundries to make the electrodes, which are far superior to their own capabilities, that the performance of their neural interface will increase greatly both in terms of signal quality and surviving within the human body.