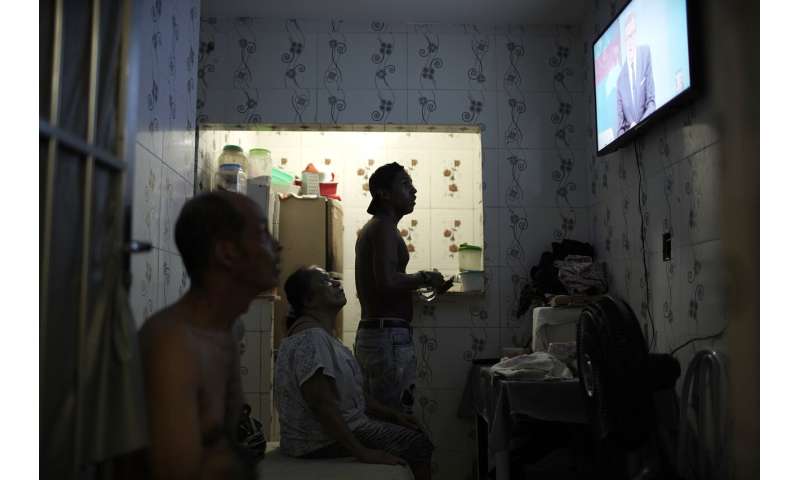 Josna Begum lives with her son in a house with four other families in a slum in Bangladesh’s capital, Dhaka, the world’s most densely populated city. “Distancing is impossible for us,” she said.

The 35-year-old, who occupies a single room with her 12-year-old son and earns $100 a month as a domestic worker, shares the single kitchen in the house with 22 other residents.

The Bangladeshi government this week ordered a nationwide shutdown to try to slow the spread of the coronavirus in a country considered at high risk because hundreds of thousands of overseas workers have returned home from Italy and other virus hot spots. All businesses were ordered closed except food markets, pharmacies and other essential services, and people were told to stay indoors and keep a safe distance from each other.

But in Dhaka, a city of more than 10 million where the average home is less than 120 square feet and a million people live in slums, that is easier said than done.

From Mumbai to Rio de Janeiro to Johannesburg the same story is playing out in some of the world’s most unequal regions, where tens of millions live in crowded slums without adequate water, sanitation and access to health care.

“The future of this pandemic to a greater extent will be determined by what happens in very large and densely populated countries,” Dr. Michael J. Ryan, executive director of the World Health Organization’s health emergencies program, said this week. 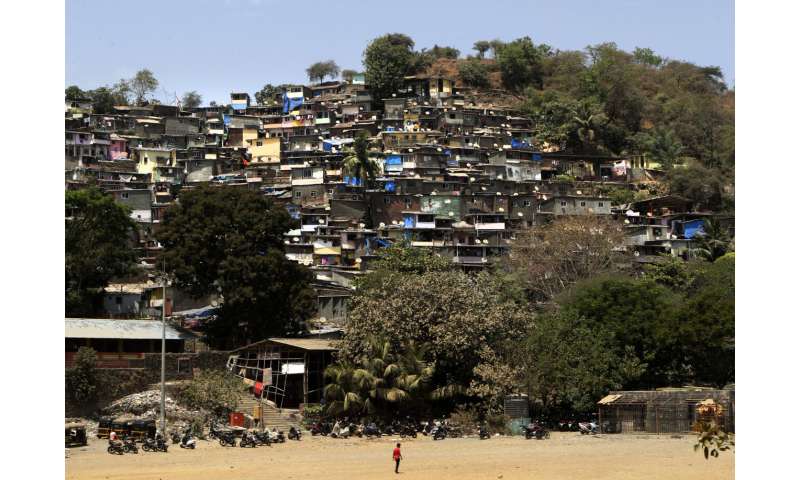 Experts believe the virus is mainly spread through droplets expelled from the mouths and noses of infected people when they speak, cough or sneeze, traveling 3 to 6 feet (1 to 2 meters) before gravity pulls them to the ground. And while most people suffer mild or moderate symptoms like cough or fever, in older adults and people with other health problems the risk of pneumonia or death is far higher.

Social distancing, while necessary in the face of such an easily spread virus, envisions a “citizen who is able to live in the most desirable way,” said Hyun Bang Shin, a professor of urban studies at the London School of Economics and Political Science. “Injustices and inequities that have basically been embedded are being exposed in face of this outbreak.”

Abu Bakar, 74, who lives with his family of three in a makeshift two-room structure in a slum in northern Jakarta can’t imagine how social distancing could work. “For me it is more important to keep myself clean,” he said. 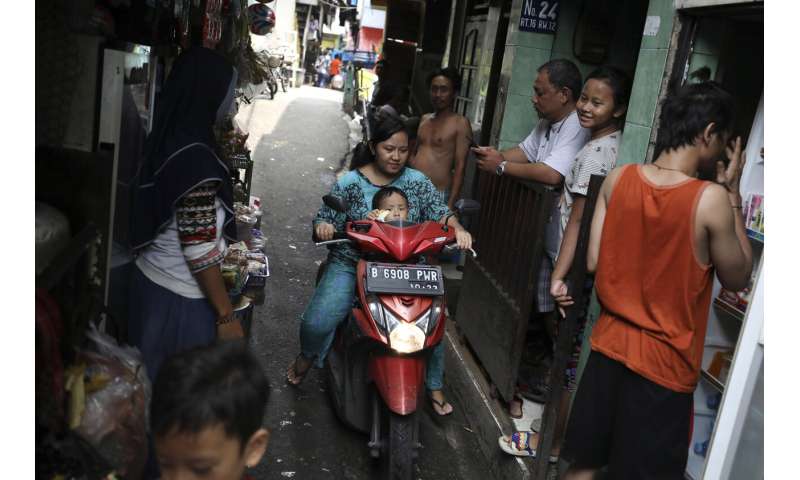 But even that can be nearly impossible in an area regularly ravaged by seasonal flooding from the murky, trash-filled water of a neighboring reservoir. Marks on the walls show the flooding can be as high as 2 feet.

In the sprawling slum, where thousands lived crammed together in dilapidated structures with poor ventilation and narrow walkways, Bakar says that even if he were to become sick, he wouldn’t be able to isolate himself.

And that’s far from the only problem, said Elisa Sutanudjaja, of the Jakarta-based Rujak Center for Urban Studies.

“There’s a major lack of clinics, sanitation, and other utilities. So for many it’s not only the lack of space that’s a concern,” she said.

In Mumbai—where the city and its suburbs have seen a tenth of India’s nearly 900 cases—53-year-old Abrar Salmani lives with 11 family members in a house so small that many regularly sleep outdoors in the Bhim Nagar slum. 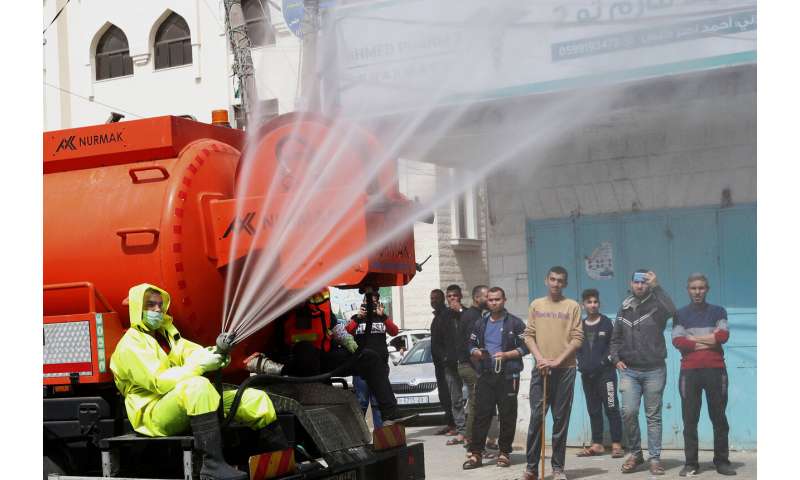 The unemployed weaver said most families don’t have access to water and rely on communal washrooms for bathing. “Our demands to have a water pipeline haven’t been answered for years,” he said.

In the Gaza Strip, where 2 million Palestinians lived squeezed into 140 square miles and more than half are unemployed, the arrival of the virus this week prompted the territory’s Hamas rulers to order the closure of cafes and wedding halls, and to cancel Friday prayers at mosques. Residents were urged to stay at home and refrain from close contact.

But with chronic power shortages of at least eight hours a day, it’s hard for Gazans to stay inside their homes. And the traditional conservative Muslim society frowns upon a handshake being declined, let alone a kiss on the cheek.

“My friend was upset after I refused to shake hands with him, even though I tried to explain to him this is because of the coronavirus,” 53-year-old Yasser Anan said. “Eventually, because he is dear to me, I had to kiss his forehead in apology.” 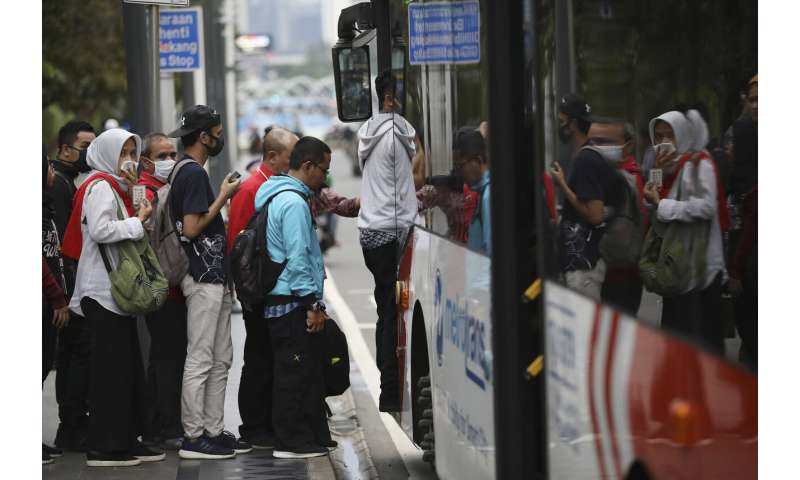 Across Africa, home to some of the world’s fastest-growing cities with badly strained infrastructure, authorities worry that the virus could swiftly spread through slums and impoverished townships. Tear gas and gunfire have been used in a couple of cities in a rough bid to enforce social distancing. So far the continent of more than 1.3 billion people has nearly 3,500 cases, but with the global shortage of testing kits the actual number could be higher and health experts have warned that the rising rate looks like that of Europe.

In Nigeria’s seaside city of Lagos, Africa’s largest with more than 20 million people, authorities have scrambled to spread the word about the virus among slum dwellers. In the vast Makoko slum, where shacks are built on stilts and sewage runs into the sea, residents listened with a mix of fear and defiance.

Biodun Edward scooped up a handful or the murky water and drank it. “Let (authorities) come and test it, there’s no disease here,” he declared. 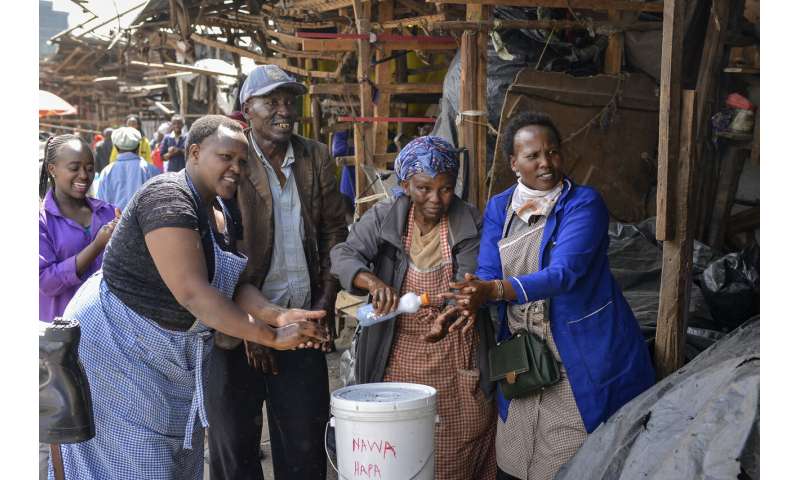 “Firstly, the smoke in the air will ward off disease, strong alcohol,” he added, then pulled a piece of ginger root from his pocket and called it protection.

In South Africa’s crowded, impoverished townships, tens of thousands of workers pack into groaning minibus taxis for commutes with little or no protection. At home, extended families squeeze into a single room or two and communities draw water from collective taps. A countrywide lockdown began Friday.

“Coronavirus scares us since we’re living in a shack,” said one Soweto resident on the outskirts of Johannesburg, Mando Masimola. “We don’t know how we’ll survive if the virus infects us.”

In Latin American and the Caribbean, experts are warning the virus could kill untold numbers in the poorest sectors of society, where not working means not eating, people live packed together and few have access to health care, let alone sophisticated medical care. 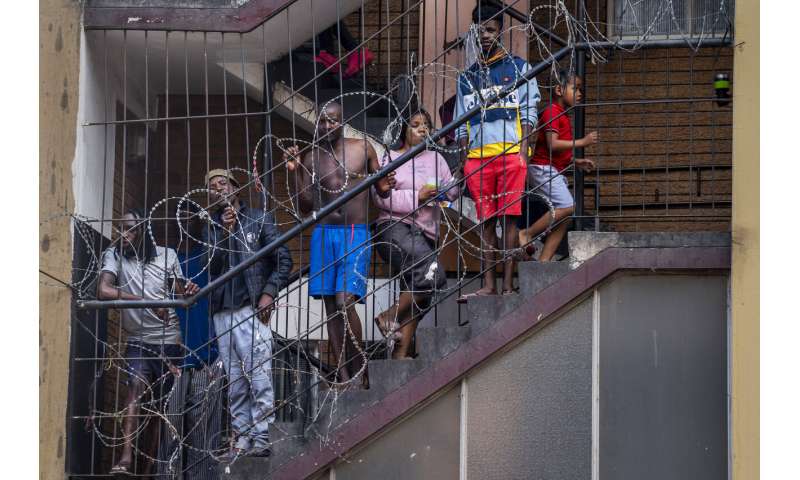 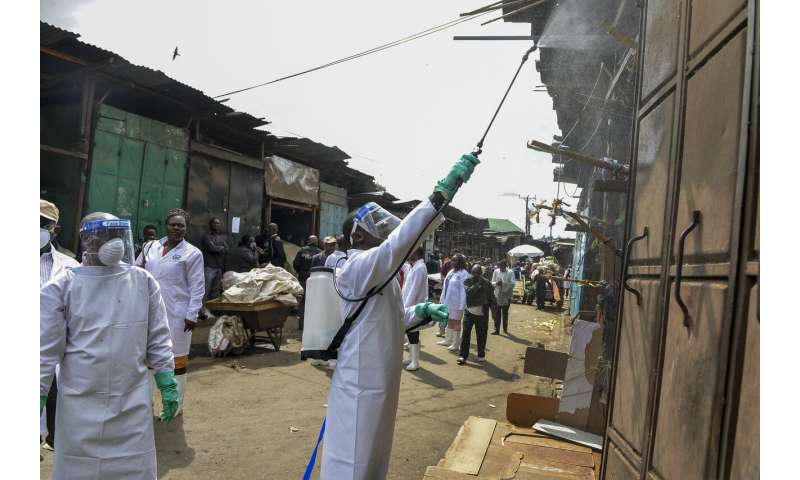 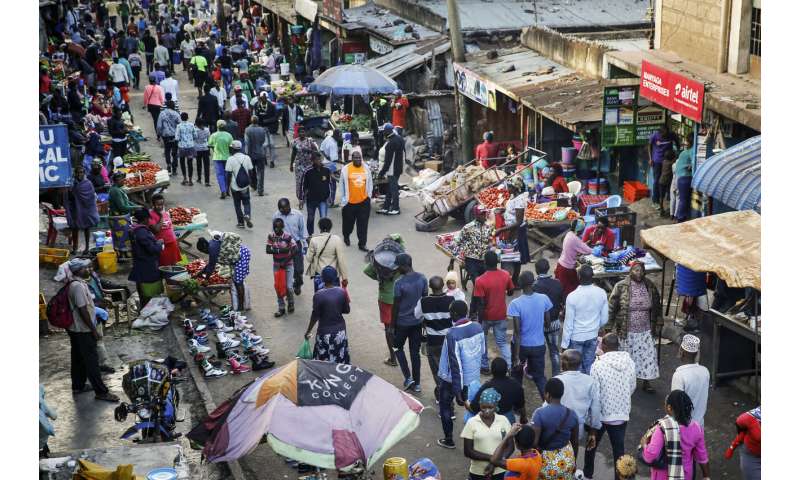 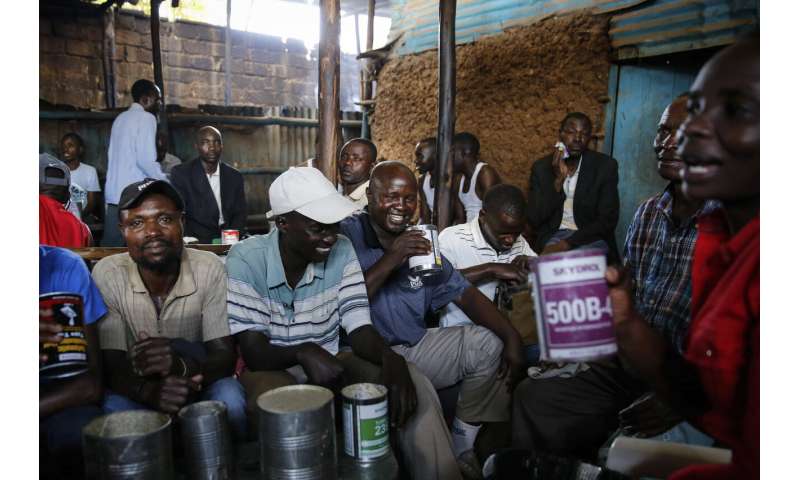 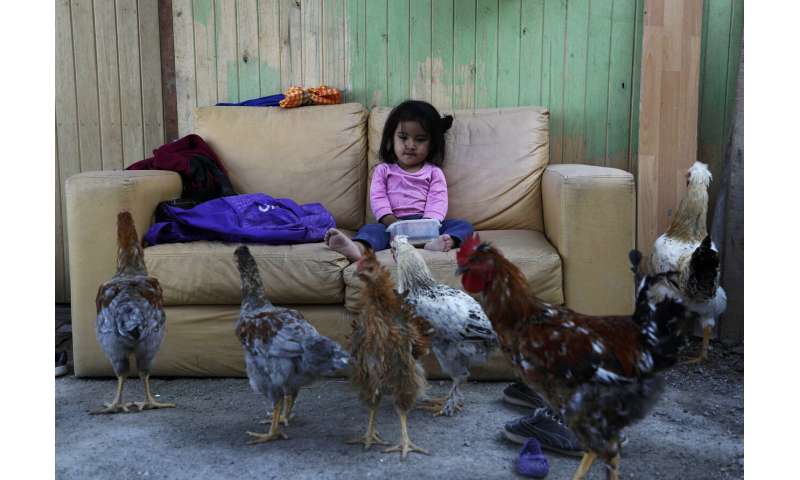 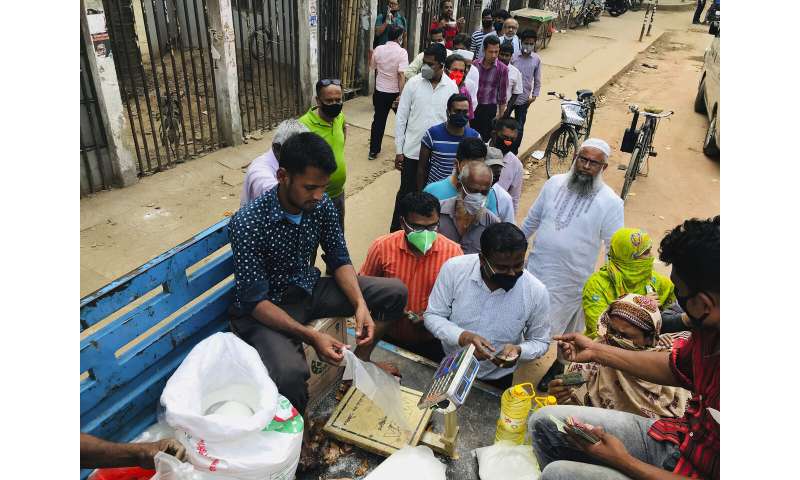 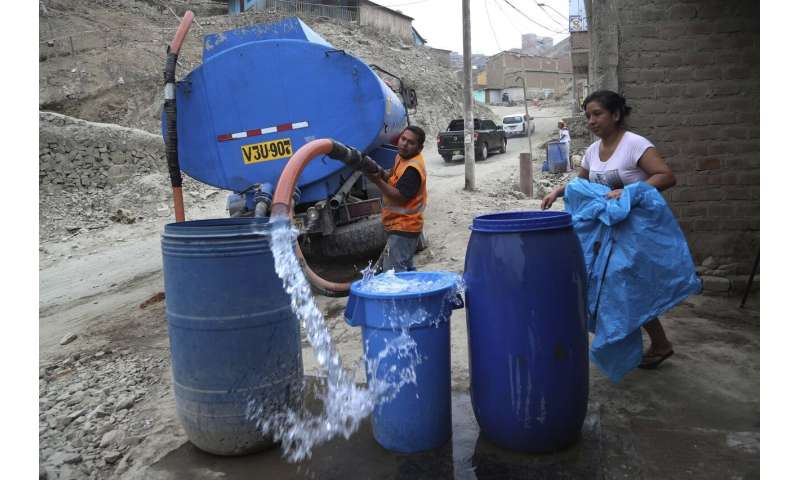 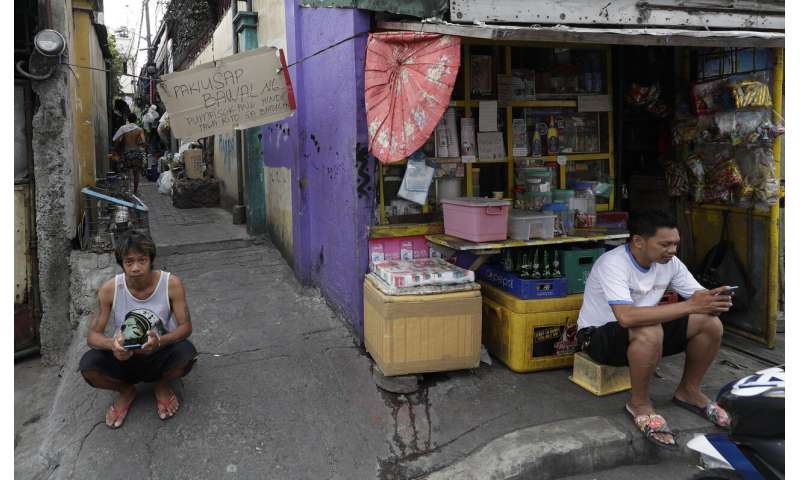 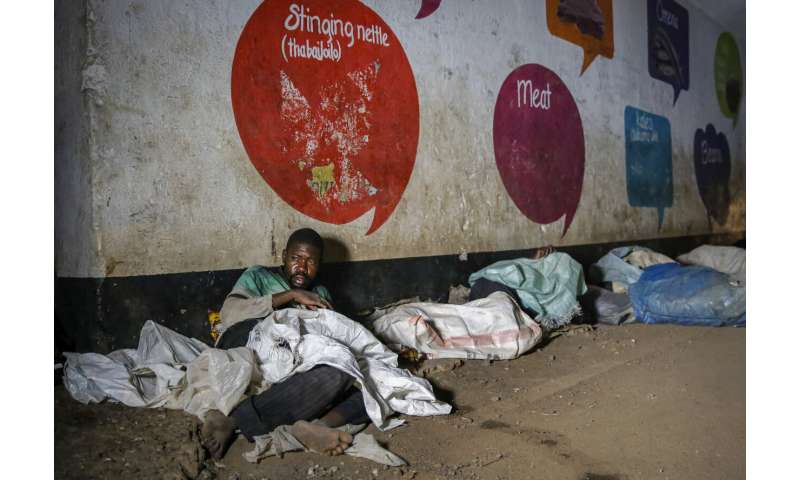 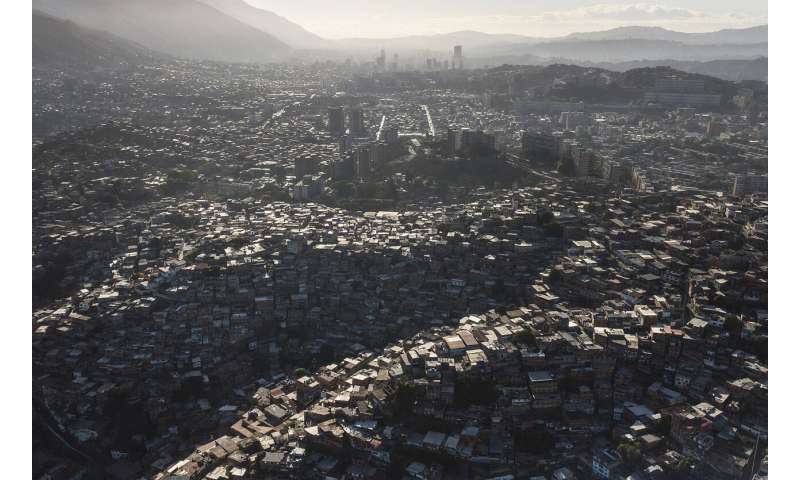 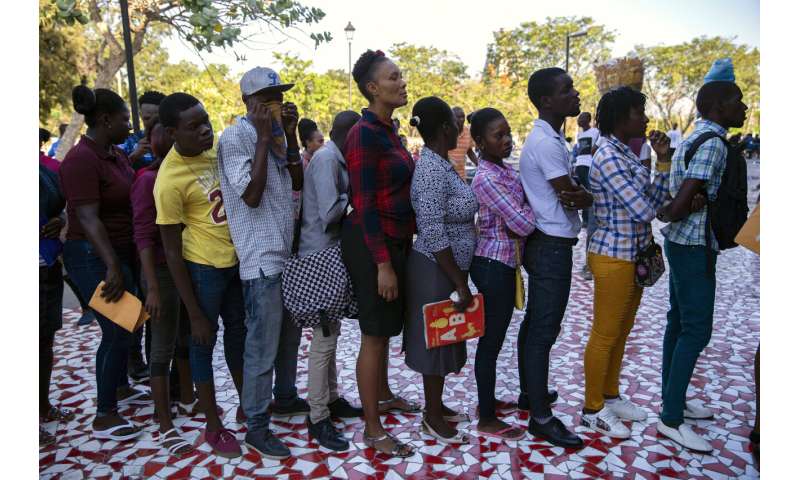 “Quarantine here is impossible,” said Raull Santiago, founder of two charities in the favelas, or slums, of Rio de Janeiro.

“It’s wall to wall, there are homes of two or three rooms with six people living inside,” he said on Twitter, along with a photo of tightly packed brick houses in the Complexo do Alemao favela. “How do you do it?”

The first person to die in Rio de Janeiro state was Cleonice Goncalves, a 63-year-old woman who worked as a maid for a family in Leblon, one of Rio’s wealthiest neighborhoods. The woman of the household was infected during a trip to Italy but didn’t tell Goncalves, the victim’s brother told local media. Concalves, who had hypertension and diabetes, fell ill and died on March 17.

“There’s a large population of working people … that are just going to be unable to simply stay home,” said Geoff Ramsey, a Washington-based researcher at the Washington Office on Latin America.