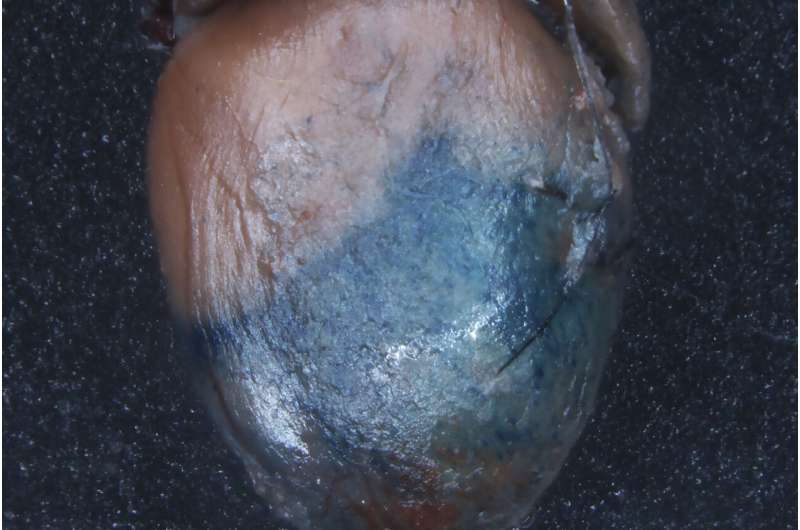 If humans are ever going to be able to regrow damaged tissues the way lizards and fish routinely do, it will require the precise control of gene expression in time and place—otherwise you might end up with random cells growing everywhere or a new body part that never quits growing. That is, stopping the process just as important as starting it.

A team of Duke scientists studying how other animals regrow damaged tissues has made an important step toward controlling at least one part of the regenerative machinery with that kind of precision. They used the mechanisms zebrafish rely on to repair damage to their hearts combined with viral vectors used for gene therapy in humans.

In a new paper appearing online Dec. 13 in Cell Stem Cell, the researchers demonstrate the ability to control gene activity in response to injury, limiting it to a specific region of tissue and during a defined time window, rather than being continuously active in the entire organ.

They borrowed a segment of fish DNA that they call a TREE, tissue regeneration enhancer element. TREEs are a family of gene enhancers included in the genome that are responsible for sensing an injury and orchestrating the activity of repair-related genes for reconstruction in a specific place. These enhancers also can shut off gene activity as healing is completed. These regulatory elements have been found in fruit flies, worms, and mice as well as the zebrafish.

“We probably have them too,” said Ken Poss, Ph.D, the James B. Duke Distinguished Professor of Regenerative Biology in the Duke School of Medicine, who discovered heart regeneration in zebrafish two decades ago and has been studying it since. “But it’s just easier for us to find them in zebrafish and ask if they work in mammals.”

About 1,000 nucleotides long, these enhancer sequences are bristling with recognition sites for different factors and stimuli to attach and change gene activity. “We don’t fully understand how they do this and what they’re truly responding to,” Poss said.

Different cell types within an animal also have different types of these enhancers, Poss said. “Some of them are responsive in multiple tissues—those are the ones we use here. But when we profile regenerating spinal cord or fins in fish, we get different sequences.” There may be tens of thousands of these types of enhancers in the human genome, he added.

As a first step in this 6-year research project, the researchers incorporated several different kinds of zebrafish TREEs into the genomes of embryonic mice. Using a visible marker to indicate gene activity, they found that about half of the enhancers worked as intended and turned tissue blue when and where they sensed tissue injury in the transgenic mammals.

Then they wanted to know if they could selectively incorporate the enhancer elements into an adult mouse using adeno-associated virus, a familiar gene therapy tool for introducing gene sequences into cells. The virus introduced DNA containing an enhancer to all tissues, but the hope was that the TREEs would only become active in response to an injury.

A series of experiments in heart attack models of mice showed that viruses containing a TREE could be infused a week before injury and then the enhancer would jump into action when it detected injury. But they found it also worked when introduced to the animal a day or two after the heart attack. “All three TREEs that we tested could be effective if delivered one day or sometimes longer after the injury—they could still target expression to the injury,” Poss said.

“Is this method of delivering a TREE and a gene going to allow us to deliver a molecular cargo to the right place at the right time? We found that it does in mice,” Poss said.

They also virally delivered a TREE and a fluorescent marker gene in pigs, which have a much larger heart with a more human-like heart rate. They infused viruses into the pig hearts through the coronary arteries either before or after a heart attack and again, the marker only glowed at the site of the injury.

Then, to see if this system could actually repair damage, rather than just sensing damage and turning on a gene that lights up tissue, they delivered a hyperactivated form of YAP, a powerful tissue growth gene that is implicated in cancer. The key question was whether this “really potent hammer” that can make cell division run amok could be lassoed into working only in the right time and place.

They used a mutated YAP controlled by a TREE to see whether they could have safe growth of muscle after a heart attack in mice. “The TREE turned on a mutated YAP for a few weeks, just in the injury site, and then it naturally shut down expression,” Poss said. The treatment caused muscle cells to begin to divide and the mouse’s heart returned to near normal function after several weeks, though not without some scarring.

“You really wouldn’t want to express YAP at full blast, that can cause problems like excessive growth, but what we found is that we could direct it,” Poss said. “The whole animal gets the gene therapy, but the YAP cargo only gets expressed at measurable levels when and where you injure the heart,” Poss said. “We think we can use these methods to control genes in a certain time and certain space, and that includes shutting them off.”

The next task for the researchers will be understanding better what molecules bind to the enhancers, what controls their functions, and where they are located in the human genome, in addition to improving their targeting abilities.

“These control elements are what’s important,” Poss said. “Zebrafish have largely the same genes that we do, but their ability to regenerate the heart is a function of how they control those genes after a massive injury.”

“And what about other injury models?” Poss wonders. “Can this work for traumatic brain injury or spinal cord injury?”